Home of the blackest church, biggest bell and narrowest street in Romania

In a twist of historical irony, probably the best way to encounter unchanged European medieval architecture is to visit Romania. There, guarded by the Carpathian Mountains, lies Transylvania, the home of fictional Dracula and of what used to be a significant German population. The Saxons arrived and settled here in the Middle Ages at the invitation of the Hungarian kings, and spent the next several centuries building fortified cities, Gothic cathedrals and Baroque mansions. They developed trade and industry in this rich land. 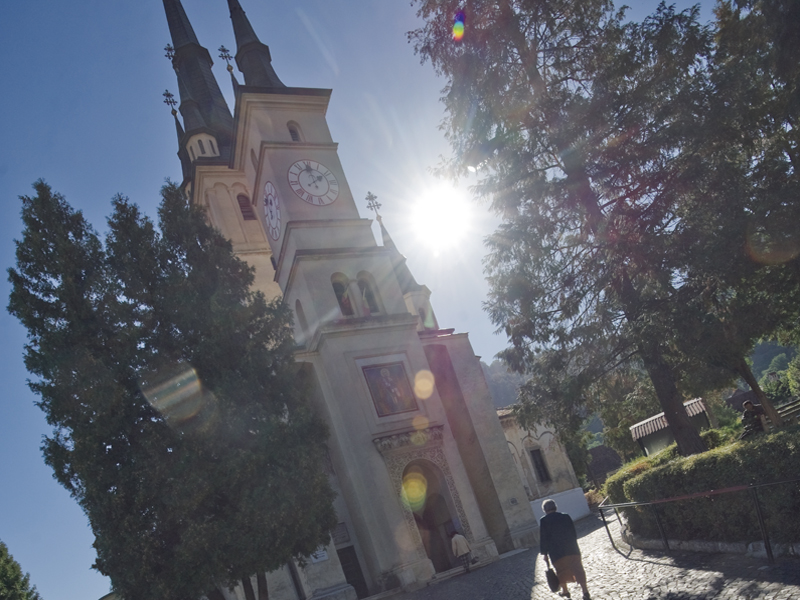 The church at the former Romanian neighbourhood, Şcheii

What makes a Romanian medieval journey even more attractive is its surreal quality. In Transylvania, ghoulish or fairytale castles and cities are surrounded by the grim remains of Communist prefabs, dilapidated but still functioning factories and second hand clothes shops.

For Transylvania first-timers, the city of Braşov is one of the best places to begin.

Braşov stands where the northern slopes of the Carpathians end, on one of the main passes through the mountains. Established in 1211 by Teutonic knights on the orders of Hungarian King Andrew II, the city was planned as a stronghold to guard the plain. The area was populated by Saxons in the 12th Century. Their skills in crafts, mining and trade turned the backwater that Transylvania was into one of the most prosperous places of east Europe. 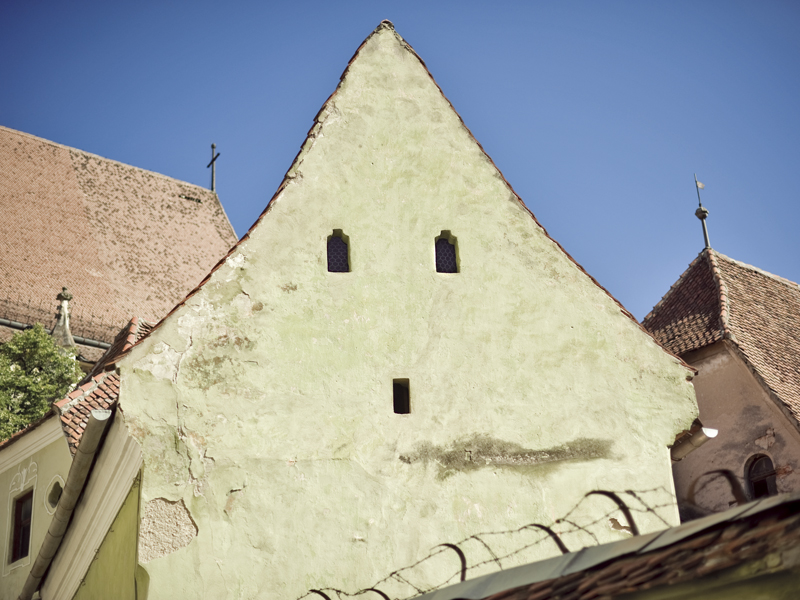 See a face? In Braşov it's easy to believe that homes have eyes

The knights were soon forced to leave, but the city of Kronstadt, along with its enterprising citizens, remained. The Saxons made themselves comfortable, creating a city within the strong walls of a fortress with numerous towers built and defended by the different guilds. No foreigner was allowed to live in the fortress, and strict rules were imposed on those visiting. Saxons had a very strict definition of the meaning of "foreigner." Even local Romanians had to live outside the city walls, in the segregated neighbourhood of Șcheii, and could enter only through the tolled St Katherine’s Gate. Romanians were allowed to settle in Kronstadt in the 18th Century, and Jews a century later.

Today, Romanians form the majority of the citizens and the city is known more as Braşov than by its German name. This change arrived after the Second World War, when most of the Saxons were expelled to the Soviet Union, or emigrated to West Germany. Some of them, however, still live in Braşov, along with a sizeable Hungarian minority and some Jews. 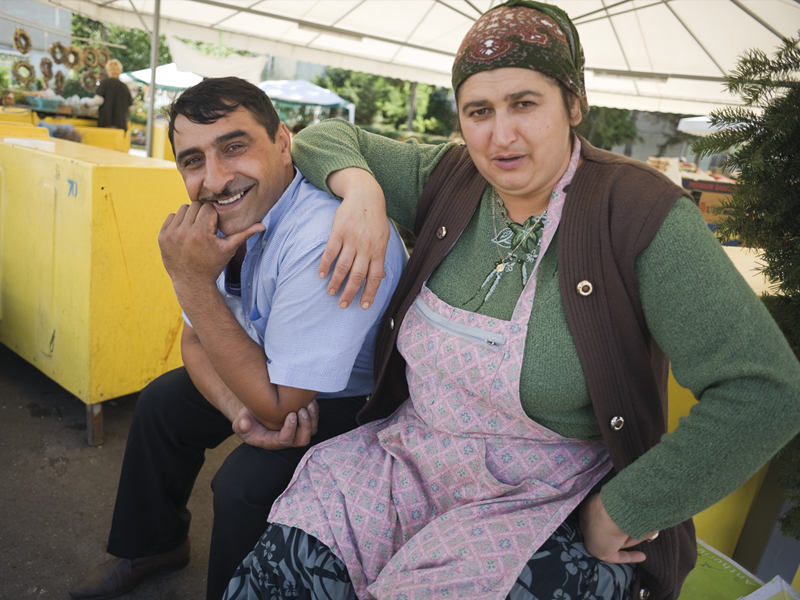 Romanian Gypsies at the market in multicultural Braşov

People came and went, but central Braşov remains largely unchanged, and much of its medieval citadel is intact. Some of the towers, following sensitive reconstruction, now rise along the fortress wall and city traffic hums through St Katherine’s Gate. Șcheii, the proud birthplace of Romanian national education, still preserves its distinctively provincial air.

Braşov's main square is still dominated by the tower of Casa Sfatului, the mayor's residence, and the streets around it are a collection of fine Baroque façades and tiled roofs with bowed attic windows which resemble human eyes and faces. Losing yourself in this labyrinth is a pleasure, but one particular street is a must. Eighty metres long and between 110 and 135 centimetres wide, Strada Sforii is the narrowest in Romania.

All these are overshadowed by the dark tower of Braşov's major attraction ‒ Biserica Neagră, or the Black Church. It was built at the end of the 14th Century by Bulgarians from south of the Danube. The inhabitants of Kronstadt invited them as at the time all the German cities and villages in Transylvania were busy fortifying themselves and building churches. When the work was finished, many of the Bulgarians chose to stay, settling in the Șcheii.

Gradually, they were absorbed into the Romanian majority. 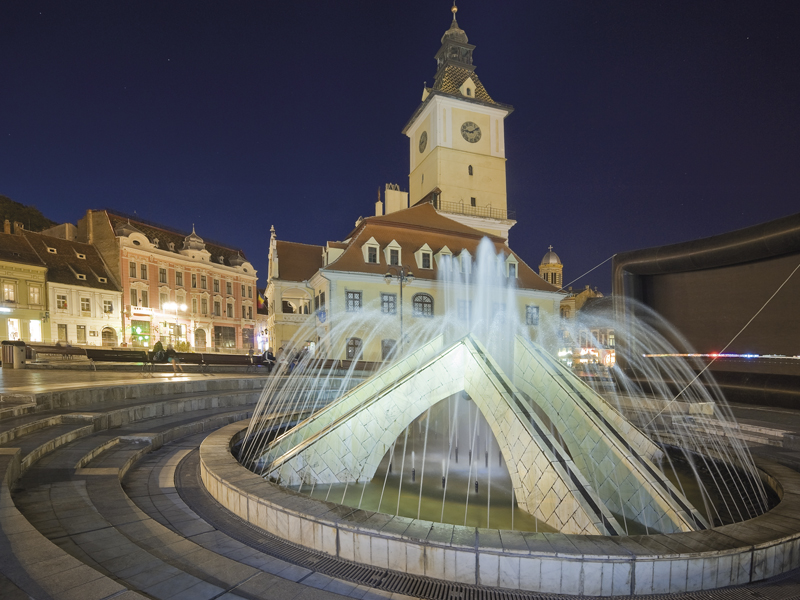 Piaţa Sfatului Square with the mayor's residence. The square was constructed in 1520 as an open market place. Through the centuries it has been used for trade, socialisation and public executions

The Black Church is the greatest Gothic cathedral in southeastern Europe, has the biggest church bell in Romania and is named after the soot which covered it after several major fires. Today, the Black Church is not that black, but the legend attached to it is as dark as you can get in a place like Transylvania without having a vampire involved.

While the Bulgarians build it, a Saxon boy constantly hung around and cried wolf that this or that wall was leaning. The moment came when one of the master builders could take no more. He pushed the boy from the tower, and secretly buried the corpse inside the cathedral.

During the Reformation, the Black Church became Lutheran. It is now a museum, but the handful of Saxons left in Braşov still gather there for worship.