The narrow Iron Gate Gorge of the Danube is deservedly called so. Here, for 134 kms, the mighty river squeezes between formidably high cliffs. Living here is hard, but 8,000 years ago at the Lepenski Vir site a group of people developed an elaborate culture, the like of which has not been seen before or since. It was wholly dedicated to the Danube. 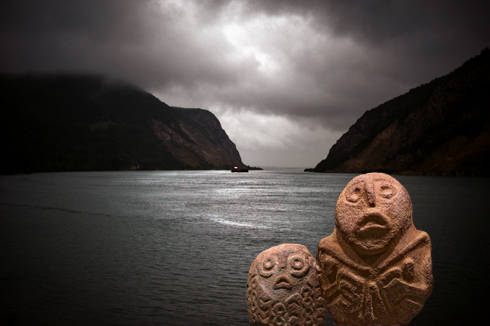 These people were a part of a larger community of foraging hunter gatherers which had survived the harsh conditions of Ice Age Europe. They lived on big game, roaming from one cave camp to another. Around 10,000 BC the climate grew milder, and the permafrost receded north. Change brought change. The staple big game disappeared, and people were forced to adapt, developing fine flint arrows and elaborate stone knives to hunt smaller game and fish. They continued foraging, but in their wanderings they started to settle for a while in camps of huts in the open. Historians call this period in human history the Mesolithic.

About 7,000 BC, a group of Mesolithic Europeans found a low plateau in the Iron Gate Gorge, at Lepenski Vir, near the Serbian village of Donji Milanovac. They made a small camp there.

In the beginning the settlement was a humble affair. People would live in fewer than a dozen small huts for several months, and then would move on. In their absence, the river might overflow the low terrace, covering everything with mud. When people returned, they would start everything anew. They would remember or see where the remains of their former homes had been, and would built new ones on top of them. 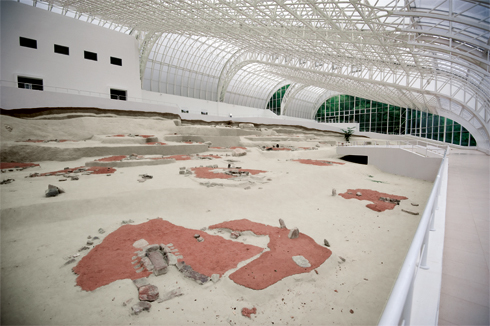 After the original site of the mesolithic Lepenski Vir was submerged by the Danube the settlement was moved further up the shore. It is now a part of a fine museum, sponsored by the US Government, where the millennia-old huts are exhibited as they were discovered by archaeologists

This lasted for generations. Centuries passed, and the village grew. After 500 years, the settlement already had two "neighbourhoods," divided by an open place where inhabitants would meet and communicate. The style of construction also changed. People started building huts in a peculiar fan-shape plan facing the river. This shape, according to some researchers, mirrored the outlines of the nearby Treskavec mountain.

Lepenski Vir was not only a place for living. It was also a place for dying. Many people, mostly children under three years old, were buried here. Most of them were interred in the houses, leading modern scholars to speculate that this would turn them in protectors of the living.

Around 6,000-5,600 BC, things started to change. A new way of living was making its way across Europe. People discovered new skills such as farming, cattle breeding and pottery. They would settle, at least for several years, in one place, and would built more and more elaborate houses. The Neolithic had arrived.

Lepenski Vir, however, remained a stronghold of Mesolithic culture. Indeed, it was going through its heyday, and this was when its inhabitants developed the first large-scale sculpture in Europe.

People had been making female figurines since the Palaeolithic times, and continued into the Neolithic, too. In spite of obvious differences in style, technology and materials, however, these figurines have three things in common: they are palm-sized, the hips and/or breasts are emphasised and their features are nothing more than a few scratches.

The Lepenski Vir statues are as different from these figurines as is a Michelangelo from a Henry Moore.

Carved from massive sandstone river boulders, they were large and heavy, all big gaping mouths and wide opened eyes, a breathtaking combination of human and fish features.They were placed on altars by the hearths or at the doors of the houses. Scholars think they represented river deities or divine forefathers.

Probably the Danube itself was worshiped as a god, which is logical. The river brought the people of Lepenski Vir both food and destruction. In front of the settlement, there was also a strong whirlpool. To show their respect, the people of Lepenski Vir built their huts facing the river and buried their dead perpendicular to its course, as if the living believed their souls would become one with the river.

Whatever beliefs the people in Lepenski Vir practised, their fame spread. As the Neolithic culture flourished around them, the village remained stuck in the Mesolithic age. Some researchers speculate that in that period it had become a religious centre, a place for worshiping the past. Here, Neolithic people would pay their respects to some mythic forefathers before returning to a more comfortable life in their villages.

In 1965, Belgrade University archaeologists started research in the area, as the building of a dam downstream would raise the water level significantly. They found the settlement the same year, but the real surprise for Professor Dragoslav Srejović and his team came in 1967, when the first sculpture was unearthed. The survey ended in 1970, with 136 buildings and 146 graves excavated. 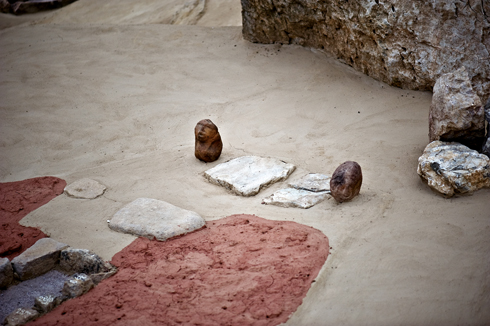 Most of the enigmatic statues were discovered in huts, in altars or by the hearths. Whether they represented forefathers or gods remains a mystery

The importance of Lepenski Vir was instantly recognised. It was only in 1994 that large-size stone reliefs carved in 10,000 BC at the Anatolian site of Göbekli Tepe were discovered.

The remains of the Mesolithic settlement were moved uphill. Today, the huts are displayed in the modern Museum of Lepenski Vir (www.lepenski-vir.org, Serbian language only). The museum's main attraction is the hall with about a dozen boulder sculptures.

There is hardly a photograph that could prepare you for the size and the expressiveness of these 8,000-year-old faces.

Their fish-like mouths and eyes gape, frozen for all eternity, still redolent of the genuine surprise experienced by long dead artists, when they finally realised they had created not just idols, but objects of art.