A class of school-children are sitting on the floor. They are silent, attentively listening to their teacher. Their eyes are fixed on the long marble frieze in front of them. On its white surface, a solemn procession of men and women, of riders and kids, head towards an unknown destination. The figures are 2,400 years old, yet they look as alive as the schoolchildren watching them.

Sitting a few metres away, Dimitrios Pandermalis, head of the New Acropolis Museum in Athens, smiles. "In summer we have mostly foreigners, but during winter most of the visitors are Greek. Schoolchildren, especially. I like them, they make the place alive," says Pandermalis. Behind him, through the thick glass wall, looms the museum's raison d'être – the real Acropolis. 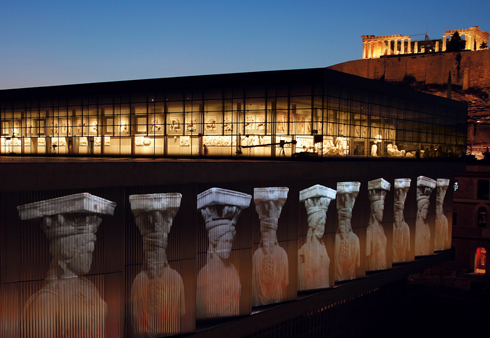 The historical hill in the heart of Athens is one of the few places which embody a crucial stage in the development of Western civilisation. In the 6th-5th centuries BC it was in the eye of the hurricane now called Classical Antiquity; a time when, within decades, the foundations of philosophy, science, mathematics, art, literature, architecture and politics were being laid. The Acropolis is the showpiece of this civilisation. The Parthenon, the Erechtheion and the Propylaea are examples of ground-breaking design, decorated with stunning sculpture, united to justify a novel and brave idea: that man is the measure of all things.

In the centuries after Antiquity, the treasures, buildings and sculptures on the Acropolis were largely destroyed, most famously during a Venetian attack in 1678, or taken away by Western collectors, like Lord Elgin. In spite of it all, the Acropolis remained a place of immense significance, and archaeological research in the 19th-20th centuries brought back thousands of artefacts which had accumulated on the hill over the millennia of human occupation.

For decades, only a tiny part of the finds could be exhibited, as the halls of the museum on the Acropolis itself were too small. Most of the artefacts were either locked in store rooms, or loaned to other museums. From the 1970s, there were three attempts to create a proper museum, but all failed.

In 2000, Professor of Archaeology Dimitrios Pandermalis took over the running of the museum and immediately started work on the creation of a new one. "It was a complicated process. For many years there was public argument and resistance," he recalls. Indeed, almost every aspect of the project was criticised – from the decision to demolish two listed houses to open up space for the new museum to its avantgarde architecture. 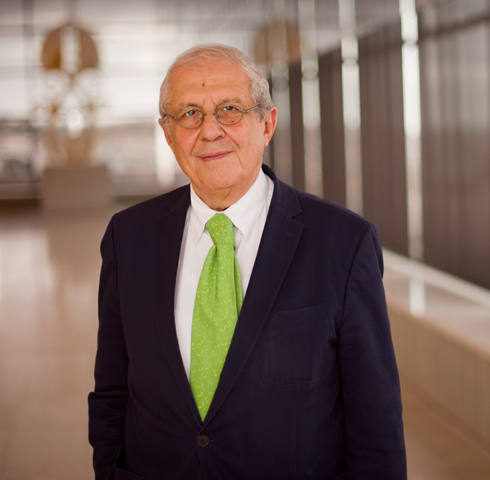 Professor Dimitrios Pandermalis, the president of the Acropolis Museum

Designed by New York-based Bernard Tschumi, the new museum is all concrete, straight lines and glass. "There were people who wanted a museum in the Classical style," professor Pandermalis says. "But we said: 'OK, we already have the original there, why build an imitation?' We thought it would be more honest for the museum to represent our own era. And people like it. Especially the younger folk."

The museum opened in 2009. "Every part of it recreates, symbolically, an aspect of Athens and the Acropolis history," professor Pandermalis explains. The museum is more than just an exhibition space – it is a bridge to the past. Under the glass floor of the ground level are the streets and the houses of the ancient inhabitants of Athens. The long ramp leading up is packed with everyday and religious artefacts, recreating life around the Acropolis.

The next two levels are entirely about The Hill. The lower one is dedicated to the predecessors of the famous Parthenon, and is filled with Mycenaean and Archaic artefacts and statues. The upper level is about Classical Athens and the marvels of the Parthenon and the Acropolis. Conceived by Pericles, the temples and the buildings on the hill were to be a glorious celebration of the Greek victory over the Persians in the wars of 499–449 BC; a larger-than-life manifestation of the vitality of Athens and its civilisation in surviving the destruction of the Acropolis by the Persians in 480 BC, and its ability to flourish.

This level is actually a replica of the Parthenon. The dimensions and orientation of the temple are the same, and every bit of the sculptural decoration – the eastern and the western pediments, the metopes, the frieze – is in its original position. The originals were moved to the museum, and what you see outside now are copies.

About half of the sculptures and reliefs in the museum, however, are not originals. "Those are in the British Museum," professor Pandermalis says. "So we decided to replace them with copies."

The Acropolis Museum is also a place for research. Excavations on the hill are finished, but archaeologists are busy identifying parts of the ancient buildings, reused in later times in the walls of the Acropolis. "We also explore our own store rooms," professor Pandermalis says. "We have about 4,000 fragments of marble – hands, feet, heads – and every one of them has its own place in the reliefs and sculptures from the temples." The task is time-consuming and difficult, but also exciting, like constructing a jigsaw puzzle, admits Vasilios, one of the archaeologists working in the museum. 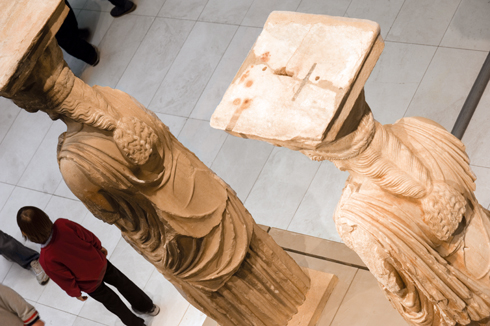 Some of the surprises the New Acropolis Museum holds: looking at the Caryatides from behind

New technology is widely used. All classical sculptures are 3D scanned and digitally surveyed. The five Caryatids (the sixth one is in the British Museum) are undergoing laser cleaning. An international programme is studying the colouring of the archaic statues – few non-historians are aware that the white marble statues were once glowing with vivid colours. The eyes and the lips, the hair and the beards, the jewellery and the fringes of the clothes were all artfully painted in blue, red, green, and black.

The museum is also exploring the realms of the digital age. It features on the Google Art Project, offering a high-quality virtual tour; and is developing a mobile app guide. The museum is open until 8pm and on Fridays closes at 10pm – a revolution in a country where most of the sites and museums shut down at 3pm. Entrance is only 5 euros.