All the tourist traffic in Constanta, on the Romanian Black Sea coast, revolves around the two focal points of the "historical peninsula" – the statue of Ovid at its beginning and the casino at its tip. Between them is everything worthy of notice in this otherwise drab post-Communist city. Here are the History Museum and the Roman Mosaics Building, the great Art Nouveau Mahmudiye Mosque, several exquisite churches and some traces of ancient structures, and dozens of now derelict mansions that in various degrees evoke pre-Communist glories.

Interestingly, the statue and the Casino also represent two contradictory views of Constanta and life there.

Ovid despised Tomis, the tiny Greek colony founded around the 5th Century BC and surrounded by Barbarians, the Thracian Getae. The master of Latin poetry was exiled to Tomis in 8 AD from sunny Rome with its bustling life, intrigues, fine food and fine ladies. Why Emperor Augustus banished Ovid is still a matter of debate. The exile in the backwater of Tomis, with its harsh winters devastated the poet. He spent the following 10 years of his life there, writing two books – Tristia, or Sorrows, and Epistulae ex Ponto, or Letters From the Black Sea. In both, great poetry is laced with complaints about living among people who would not appreciate his talent. For Ovid, as he put it in Epistulae ex Ponto, to write a poem you could read to no one was like dancing in the dark.

The rich mosaics and the moving epitaphs of Tomis citizens, exhibited today near Ovid's statue show that in the 3-4th centuries AD Tomis was not exactly what Ovid described it as. Situated in fertile Dobrudzha, the city became a busy centre of the grain trade. At the end of the 3rd Century, it was one of the metropolises of the Scyhtia Minor province, and when Christianity arrived, it became an episcopal centre.

In Late Antiquity the city changed its name in honour of Constantia, the sister of Emperor Constantine (306-337). As new waves of Barbarians spread from the East, it was lost to Byzantium, and for centuries was effectively a part of Bulgaria. Trade decreased, but it was still important enough for the Genovese to establish a colony in Constanta in the 13th Century. After the Ottomans invaded in 1419, trade declined further and in 1856 less than 6,000 people lived in Constanta. This small community, however, was immensely diverse, featuring a majority of Tatars and Greeks, plus Turks, Jews, Bulgarians, Romanians and Gypsies. 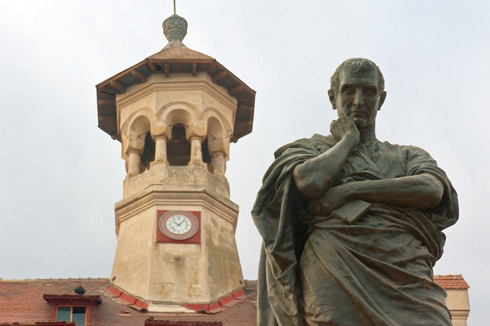 In 1860 an English company turned the economic tide in the region. The railway connecting Constanta with Chernavoda, on the Danube, boosted international trade. Ships flocked to the port of Constanta, and so did settlers. During the following 40 years, Constanta's population increased and by 1912 stood at about 27,000. The Romanians were in the majority, as Romania had been rewarded with Constanta and northern Dobrudzha for its participation in the Russo-Turkish war of 1877-1878.

The political change affected not only demographics of the city, as the Bucharest upper classes were quick to turn Constanta and its sea coast into their own small-scale Riviera. Within years, the city became a place not only for business, but also for fun.

The seaside casino epitomises this era. The first building appeared in the 1890s on the promenade, braving the strong winter winds and waves. In 1910 it was replaced with a more frou-frou one in the fashionable Art Nouveau style. The international elite fell in love with it and frequented its lavishly decorated halls and rooms to dine, flirt, dance and gamble.

The Communists managed to tone down the crowds in the casino as they banned gambling and turned the building into a restaurant. After years of neglect the building is now derelict and closed to visitors for fear it may cave in at any time. Some reconstruction plans dating back to the early 2000s stalled and never materialised.

The casino is situated on what is probably the best seaside promenade on the western Black Sea coast, a must for any visitor at any time of the year.