There was a time when, if someone from Sofia wanted to meet up with their friends in the summer, they would head east to the Bulgarian seaside, where half of the capital was spending its vacation. For several years now, however, the tide has turned. Today, if you really miss your friends in summer deserted Sofia, head south to the Greek border, and then on to Chalkidiki.

Jutting out into the Aegean, this peninsula with its three easily recognisable "legs" really has something for everyone. The westernmost leg, Cassandra, is low and not that picturesque. However, resorts catering for all tastes and budgets abound here. Chalkidiki's second leg, Sithonia, is a true gem with green mountains meeting the sea at picture-perfect beaches. There are exquisite resorts and some traditional villages. Athos, the last "leg," is literally divided between the spiritual and the worldly. The great part of the peninsula lies within the borders of a monastic republic where no woman is allowed to enter. The secular part of Athos, however, is all beaches and resorts plus the occasional religious souvenir shop.

Bulgaria's president Rosen Plevneliev is among the well-to-do Bulgarians who own a holiday home in Chalkidiki.

Hidden behind high rocks and an astonishingly narrow mouth, Porto Koufo Bay is so protected from the open sea that it earned its name, Deaf Port, as early as Antiquity. During the Second World War the Germans used it as a submarine harbour. Today Porto Koufo is definitely among the most picturesque sun tanning places on Chalkidiki. Higher prices at local tavernas are the inevitable result.

Magnificent scenery, 20 monasteries and a medieval atmosphere which has changed little if at all since the 10th Century, when this monastic republic came into being: you can have it all on Athos, if you're male. Only the most zealous visitors, however, spend more than three days on this holy ground; there is only so much church visiting and monk greeting you can take. 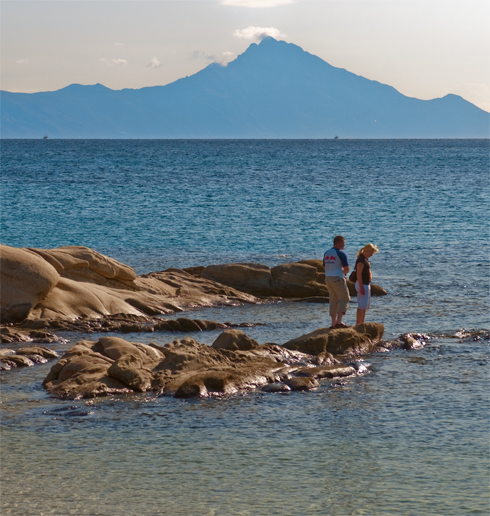 Women are not allowed to enter the monastic republic. However, they and the less curious men have another option to see the peninsula, at least from a distance. There is a regular boat trip from the town of Ouranoupoli. In three hours it covers the west coast of Athos, providing glimpses of several monumental monasteries and the awe-inspiring Mount Athos (2,030 m). When Alexander the Great died in 323 BC there was a proposal to carve the whole mountain into a huge statue of him. The idea, curiously, never took off.

3. SAILING TO THE BEACH

This year, 29 of Chalkidiki's beaches were awarded the international Blue Flag ecological certificate. If you want something different, however, do your sunbathing on some of the hidden beaches accessible only by boat. Having a beach all to yourself is an experience not to be missed. If you are tempted, ask at your hotel and the staff will be happy to help.

Chalkidiki is more than its coastline. The central part of the peninsula is all demanding mountains, deep forests and sensitively restored traditional villages. Mount Holomonas, a protected area, is a great place if you are into trekking, riding and biking. For picturesque architecture and village idyll opt for Arnaia.

For centuries, people have made it easier to sail around Greece's rugged coastline by digging canals. Chalkidiki boasts two of these. 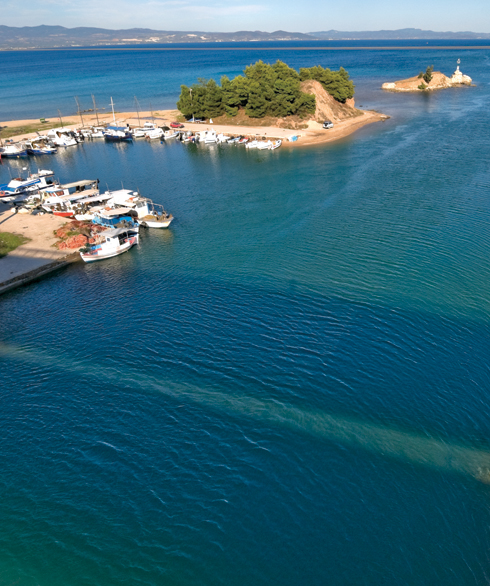 The first – not only here, but also in the world – was dug in 480 BC through the narrowest part of Athos on the orders of the Persian King Xerxes I. Twelve years before that his father, King Darius, had lost 300 ships in the treacherous waters around the tip of Athos. Today the canal, which was more than a kilometre long and about 250 metres wide, is only a moat filled with the detritus of centuries.

Chalkidiki's second canal was cut through Cassandra and is still there. It was built in the 2nd Century BC, probably after the Romans conquered this part of Greece, taking control of the rich trading city of Potidea. Due to lack of maintenance, the canal silted up in the Middle Ages. It was dug out again in the 19th Century.