You can take religion out of Jerusalem, but you cannot take Jerusalem out of religion. Even the name of the city, at least according to some scholars, derives from that of a god, the Semitic deity Shalim.

Of all the people in the world, the Roman Emperor Hadrian knew best that dividing everyday life from faith in Jerusalem was doomed to failure. In 130 CE, he announced his plans to rebuild the city, which had been in ruins since the bloody conflict between Romans and Jews resulted in the destruction of Jerusalem and the Second Temple in 70 CE. At the beginning, the Jews were happy with the emperor's plans. Their holiest city, where kings David and Solomon ruled and the Ark of the Covenant with the Ten Commandments was kept in the wondrous First and Second temples, was about to be resurrected from the ashes. However, Hadrian's plans soon gave rise to conflict. In spite of his respect for the Jews, the emperor wanted to turn the sacred site of the Second Temple into a shrine to another god, Jupiter Capitolinus. In addition, circumcision was to be banned as "barbaric mutilation" and the name of the city was to be changed to Aelia Capitolina.

In 132 CE, the Jews felt it was all too much and they joined the Bar Kokhba revolt. It lasted for four years and ended with victory for the Romans. Jews – including those who had adopted Christianity – were banned from entering Aelia Capitolina. The only exception was on Tisha B'Av, the day in the year when the destruction of the First and the Second temples and the Egyptian calamities were commemorated. 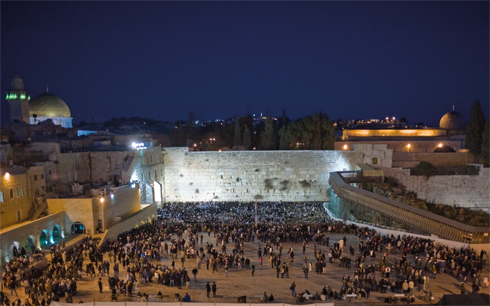 Hadrian wanted to turn religion-dominated Jerusalem into an ordinary city, where religion would be more of a ritual and less an ideal for which one would readily die. He got it wrong. The ban on Jews entering the city was indeed in force until the 7th Century, and the Second Temple never rose again, but the city never stopped being the focal point of Judaism. The Temple's Western Wall, the only remaining piece of the holy structure, became a substitute for the lost shrine and is still the holiest place on earth for Jews; a reason for pilgrimage and a site for prayer.

Meanwhile, with the ban against Jews still in force, another religion transformed Jerusalem into a major place of pilgrimage. This was Christianity, established by the followers of a certain Jew named Jesus, who claimed to be the Son of God. Jesus was sentenced to death, crucified and buried in Jerusalem where, according to the Gospels, he rose from the dead. In 326-328, while on a pilgrimage in Palestine, Empress Helena, mother of Emperor Constantine I, identified a location in Jerusalem as the spot where Jesus was crucified and buried. She built a church there and soon the Church of the Holy Sepulchre began attracting pilgrims. Throughout the centuries, and despite being destroyed and reconstructed several times, the church became the core of a net of monasteries and churches spreading all over Jerusalem on sites supposedly connected with events of Jesus's lifе.

In 621, another momentous religious event took place in Jerusalem. While standing on the ruins of the Second Temple, Muhammad, the founder of Islam, started his miraculous journey to heaven. Less than two decades later, Jerusalem fell into Muslim hands. By the end of the 7th Century a shrine called the Dome of the Rock was erected where Muhammad mounted his miraculous horse, and the Al-Aqsa, or Farthest, Mosque was built there. Jerusalem became the third holiest city in Islam, behind only Mecca and Medina. Up to 623 it was even the site of the Qibla, the direction in which Muslims face while praying. 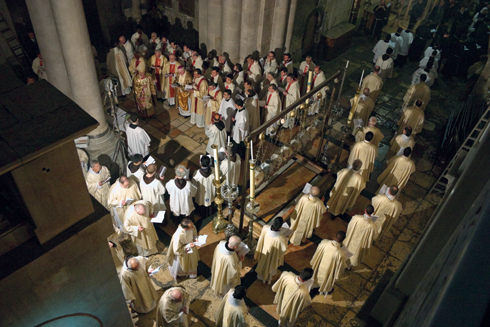 The Church of the Holy Sepulchre, built on the place where Jesus is believed to have been crucified and buried, is divided between several major and lesser Christian denominations

The juxtaposition of shrines and adherents of three major religions in the limited space of Jerusalem has resulted in conflicts in which religion was the casus belli. There were Jewish anti-Roman revolts, and the bloodshed of Christians, Jews and Muslims in the wars waged for the control of the city, from the Siege of Jerusalem in 614 up to 1517, when the Ottomans captured it. Ottoman rule ended in 1917 and the authorities even managed to contain fighting between different Christian denominations for control over the Church of the Holy Sepulchre. With the British Mandate over Palestine, however, hostilities between Jews and Palestinians, both Muslim and Christian, reignited, resulting in several conflicts and an ongoing dispute about Jerusalem's legal status.

Today, the religions in Jerusalem compete most often musically. On Friday afternoon, when Shabbat is about to begin, the square in front of the Western Wall echoes with the songs of joyous Orthodox Jews, celebrating the arrival of the holy day of the week. Another voice rises over their chants – the muezzin's call to prayer.

At the Church of the Holy Sepulchre, a cappella singing from the Greek Orthodox priests competes with the chants of their Armenian colleagues, and the Mass of the Franciscans mingles with the hymns of the Copts. Outside the church, another competition takes place, when the tolling of the bells in the belfry combine with the call to prayer of the muezzin in the Mosque of Omar directly across a courtyard.

The story of this mosque is an example – if a rare one – that the different religions in Jerusalem are capable of cohabiting in the limited space of the old city. 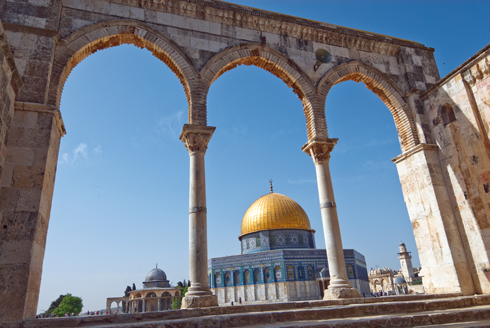 The Dome on the Rock marks the place where Muhammad's journey to heaven started, in 621. Built in 691, it is considered the oldest Islamic structure in the world. The shrine is currently off limits for non-Muslims. Some radical rabbis ban Jews from entering the Temple Mount compound altogether for fear they might accidentally step over what in Judaism is considered to be the Holy of Holies

In 636, the Rashidun Caliphate army was besieging then Byzantine Jerusalem. The city could not resist for long and defeat was imminent. The Patriarch of Jerusalem, Sophronius, refused to let the invaders inside until their caliph, or the spiritual leader thought to be a successor of Muhammad, come to the city. Caliph Omar obliged and gates of Jerusalem were opened to him in 637. The patriarch offered to show him the Church of the Holy Sepulchre, as Muslims believe in Jesus as the last prophet before Muhammad.

Omar refused to enter the church, afraid that after seeing him inside, his fellow Muslims would feel obliged to turn it into a mosque. Instead, he prayed outside, on a spot believed to be the place where the Jewish King David had prayed. In 1193, a mosque was built on the spot by Sultan Saladin, who fought against the Crusaders and won their respect with his chivalry towards non-Muslims.