"Then suddenly the sea appeared – immense quiet blue space, an abyss of water and sky united behind the tall silhouette of the island of Thassos, it, too, bathed in transparent blue. To the right, the barely visible outlines of Mount Athos were fading away. To the left were the swampy valleys of Sarıbaşan and the marshes of the Mesta River, absorbed by haze, and the dark spots of the Keramoti greenery. In the middle, at the foot of the hill, Kavala was spreading, a giant amphitheatre of white tightly-packed houses looming in a blinding contrast with the inky blue of the sea. Kavala, with the geometric outlines of its pier, with the ancient Roman aqueduct, with the jagged Venetian fortress; Kavala, with its huge tobacco warehouses, with the steep streets, with the beaches, the port, the quays and its boats; Kavala, a city of wealth and misery, where tobacco turned to gold and the workers' labour – to curses, a city without greenery, a city of white stones under a sky of fire and blue."

This was how writer Dimitar Dimov described Kavala in his seminal novel, Tobacco (1951). At the time, the city and Aegean Thrace were under Bulgarian administration and the population was swollen with Bulgarian clerks and soldiers, teachers and priests, and entrepreneurs. The latter were here because of the tobacco which was grown, processed and traded in Kavala and its environs. A lifetime later, Kavala is a different place. The city has grown. The tobacco warehouses, once on the outskirts and now incorporated into the central part, lie empty, the result of a mid-20th Century shift in the industry. Some of them have been turned into museums and exhibition spaces. If the Kavala inhabitants curse today, they do it because of unemployment, not because they toil under some ruthless tobacco manufacturer.

The Bulgarians crowding the streets of Kavala are different, too. Some arrived in the good old times when the words "Greece" and "crisis" were never used in the same sentence, and menial jobs were ten a penny. The majority of Bulgarians in Kavala now, however, are tourists.

The city was among the first Greek destinations to become popular with Bulgarians in the 1990s, with Thessaloniki, Alexandroupolis and Komotini in the same pack. Kavala is close to the border and cheap, as international tour agencies did not – and still do not – find it interesting enough for package tourism. 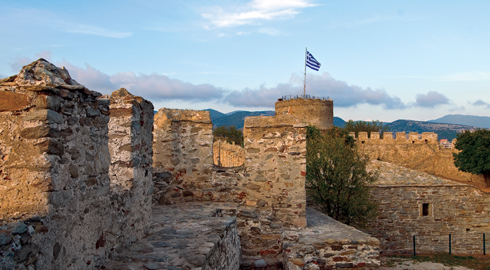 The Byzantine and Ottoman castle was built on the foundations of an Antiquity fortress. At a certain point of its existence it had even a prison. Today the Kastro is used as a tourist attraction and an open air concert venue

As Bulgarian interest in places like Alexandroupolis and Komotini faded away, eclipsed by opportunities to travel and have fun in more distant and more interesting Greek towns and islands, Kavala keeps its appeal.

There is nothing strange in this. In spite of being one of the busiest ports in Aegean Thrace, Kavala has some good beaches – four of them have Blue Flag certification – and decent hotels. The city is picturesque enough and, if you look at the steep streets, the aqueduct, the houses and the looming silhouettes of Thassos and Mount Athos with your nostalgia glasses on, you could easily decide that the city has indeed not changed that much since 1944.

Kavala is simultaneously an old and a young city, at least according to Balkan standards. Its earliest predecessor is probably a Neolithic period settlement in the Dikili Taş area. The city itself appeared on the peninsula in the Aegean Sea in the 6th Century BC. It was founded by settlers from Thassos and received the name Neapolis, or New City. For centuries it was nothing more than the harbour of the more important Philippi further inland. Being a harbour, however small, brought some important travellers to Neapolis. One of them was the Apostle Paul, who launched his first European preaching trip from Neapolis, in 49 or 50. 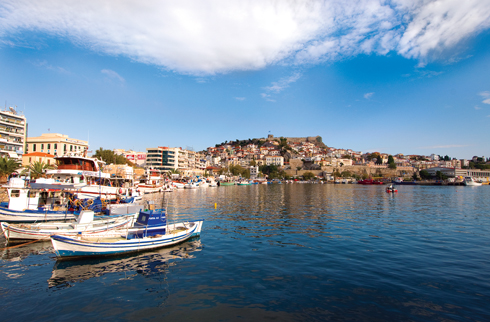 A city has been existing around the harbour for about 2,600 years

The Middle Ages saw the Byzantine city of Christoupolis, or the City of Christ, overtaking Philippi in importance. Bulgarians, Normans and Catalonians all fought for it, until the Ottomans got the upper hand in 1387. Some years later they ravaged the city.

This is why the features of Kavala are relatively new – at least compared to its great age. The arresting aqueduct, 25 metres high and with 60 arches, for example, does not date from Antiquity. It is the Ottoman descendent of a Byzantine structure, both built to bring water to the fortress on the hill of the old quarter. According to some, the great Ottoman architect Mimar Sinan designed the structure in the 16th Century. 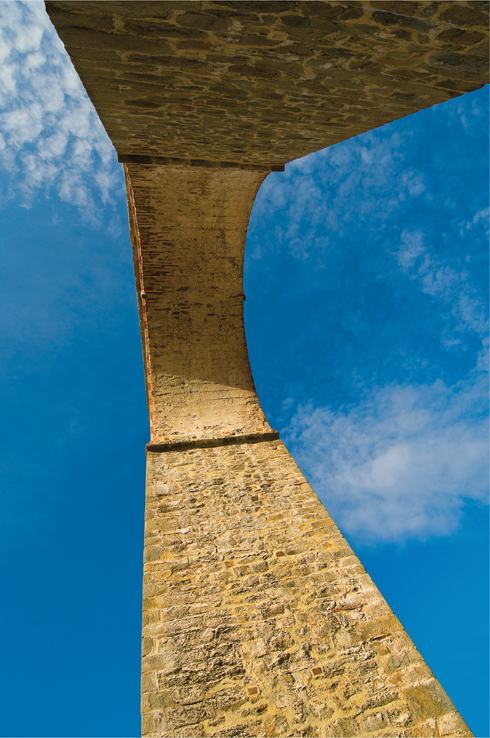 The Ottomans also reinforced and enlarged the old Byzantine fortress. The houses with projecting bay-windows that crowd on the steep peninsula are also from those times. The grandiose tobacco warehouses, built in the 19th Century in the European fashion, were the property of wealthy Greek, Albanian, Hungarian and German merchants.

Some of the monuments in the old quarter are connected with Kavala's most famous son. Muhammad Ali Pasha was born here in 1769, into the family of a rich Albanian tobacco and shipping merchant. After a brief and successful career as a tax collector, Muhammad Ali joined the Ottoman army and went to Egypt, which was recovering from the Napoleonic occupation, where he immersed himself in the local power struggles. By 1805, Egypt was effectively his own estate.

Muhammad Ali Pasha, however, did not openly dispute the power the sultan. It was his army which in 1822 overthrew and killed the rebellious Ali Pasha of Ioannina. Soon afterwards the grateful sultan presented Muhammad Ali with the island of Thassos. The pasha's greatest legacy, however, was in Egypt. Today, he is considered to be the father of the modern state of Egypt, modernising it and spawning its last dynasty. Its last monarch, the one-year-old King Fuad II, was deposed in 1953. 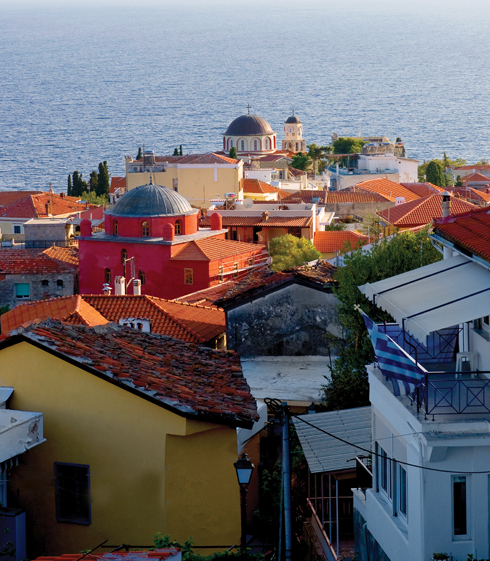 The red church in the Old Tows was built as a Muslim prayer house. In was converted into a Christian temple in the first half of the 20th Century, supposedly by the Bulgarians

Muhammad Ali never forgot his birthplace. In Kavala he built a sumptuous imaret, or soup kitchen, and school next to his father's house and paid for it himself. Both buildings have been preserved. The house is now a restaurant and the imaret is a luxurious hotel. The city has not forgotten him, either. The statue of Muhammad Ali on horseback is one of the sights in Kavala which tourists come across. 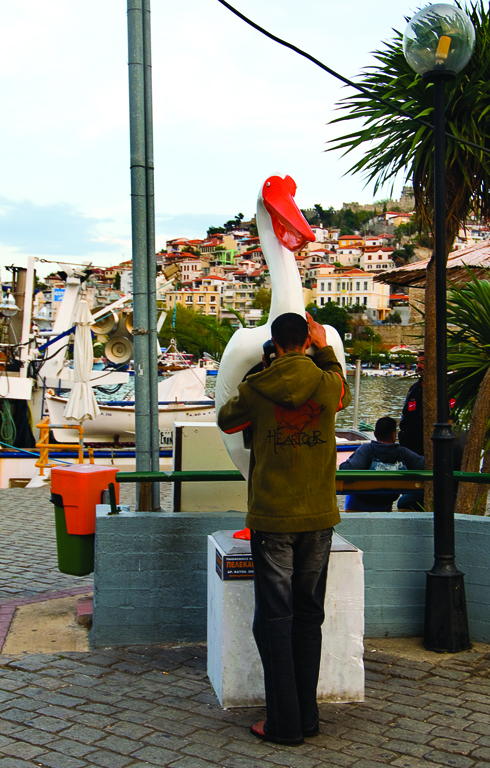 Once stinky and dirty, the promenade is now probably the best Kavala can offer

This story was repeated during the Second World War. Kavala was administered by Bulgarians in 1942-1944 as part of their agreement with the Third Reich. It was then that Dimitar Dimov visited it and experienced the odours of "packed tobacco, fish, fruits and miasma" on the pier, while mosquitoes spread deadly malaria.

Today, however, walking the promenade and gazing at the cityscape of neat houses, painted in white and pastel colours, is probably the most pleasant experience that Kavala has to offer. It is at its best at sunset.