The hotel guests the English writer Dame Rebecca West described in her 1941 classic Black Lamb and Grey Falcon, were of two kinds: they had seemed as though they had been on a honeymoon, or had been making up for the one they had never had.

But if Dame Rebecca visited Oia on the island of Santorini in 2012, she would regret that she had already used up her irony on the unsuspecting visitors of other Balkan states. The majority of tourists who gather to watch the sunset from Oia – supposedly the best sunset in the world – are in fact on a honeymoon or, at worst, on a romantic trip.

The Oia sunset has been reproduced in countless postcards, magazine covers, tour operator commercials and tourist photos. The island's guests are ready to give a lot to secure the best place for contemplating it. Those thinking strategically arrive in the early afternoon, occupy the most attractive spots at the ruins of the old Venetian fortress tower and never leave their positions until it's dark. Crowds keep gathering every minute till the beginning of the sunset when the mass of people reaches awesome proportions. Tourists seat on every railing and terrace, and block the steep stairs, which in this part of Oia serve as streets. Some enjoy in quiet the delicate change in the colours of the sky, transitioning from light blue to crimson and purple. Others are conversing with friends and relatives on their phones to boast that they are in the middle of watching how the sky is changing its colour, and flood Twitter and Facebook with enthusiastic feeds. A third group are trying to take every second of this daily, grandiose spectacle with cameras and smartphones of all brands, sizes and degrees of professionalism.

But the most enterprising sunset hunters are not in Oia. Some hours earlier they had hired boats, and after a journey across the huge bay of Santorini have stopped at the village's foot just in time for the sunset.

When the red sun touches the horizon of the daisy-blue maritime expanse, accentuating the translucent silhouette of the neighbouring islet of Aspronisi, everyone – in Oia and in the boats – falls silent for a second. Then they resume what they had been doing just a few winks ago: to talk, tweet and make pictures even more fiercely. 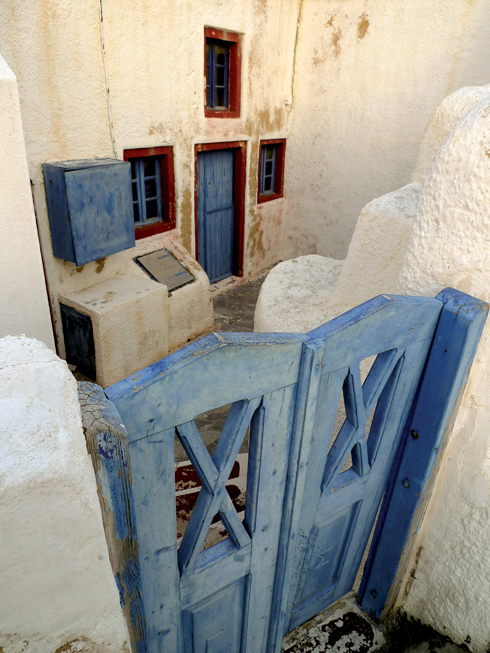 There were volcanoes where the current island of Santorini is situated, playing restlessly with the earth and the sea. Powerful and weak eruptions were modelling islands in various shapes, and then went on to destroy them only to begin their play anew. Some 30,000 years ago the next of this creation-destruction series started. The pre-historic volcano to which scientists have given the name of Skaros erupted. A ring of solid earth appeared encircling the water-filled surface of the former crater. In the middle of the nearly circular bay that was linked with the sea via a narrow strip of land there was an island.

During this time this picturesque piece of earth (one cannot but wonder what the sunsets looked like back then) was the home of a flourishing colony of the Minoans – a mysterious people whose civilisation was born on the neighbouring island of Crete. The volcano never failed to remind the people of its existence. That is why, when a series of powerful earthquakes began to shake the island, its residents lost no time leaving it. 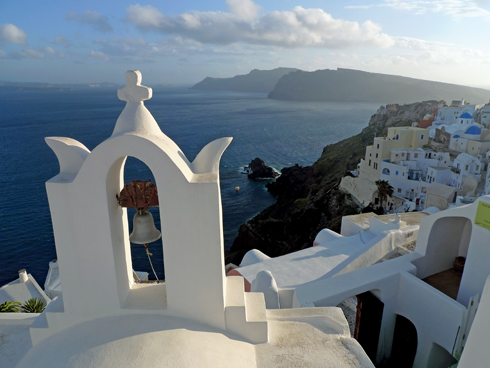 The volcano erupted with a long-pent-up ferocity. Its throat spewed 100 cubic metres of stone and ash, which buried the central town of Akrotiri with its three-storied houses, fine frescoes and the first-ever lavatories fitted with running water. The island and everything in a 50- to 60-kilometre radius was destroyed. A tsunami rose across the eastern Mediterranean. The effect of the eruption was monumental: Chinese chroniclers noted that around 1618 BC the change of the ruling dynasties went on amid unheard-of phenomena: a yellow fog, a muddy sun, July frost, famine; five crops of rice dried out.

The eruption left indelible traces not only in geology but also in the collective memory of the Mediterranean peoples. It is perhaps this story that underlies the Ancient Greek myth of the war between the Olympian gods and the giants, as well as that of the sinking of Atlantis. Five hundred years were necessary for the people to decide to return back on the island. They haven't left since. What's more, they have been using the fruitful volcanic soil on the island to grow cotton, fruits and grapes, which they used as material for an excellent wine.

The island got its current name, Santorini, in the 13th Century, when it was conquered by the crusaders of the Fourth Crusade. The name means St Irina.

During the Franks' rule Oia appeared, perched on the steep cliffs of the northern "horn" of the crescent-like island. In the first centuries of its existence it received protection from pirate attacks by means of mighty fortress walls. They hid the usual labyrinth, common for the Cyclades, of flat-roofed houses and blue-domed churches.

There are dozens such settlements in across the archipelago. And Oia can hardly claim any authenticity – in the 1950s a powerful earthquake destroyed half the place. Nevertheless, it is the most known and loved townlet of the entire archipelago. And sunsets are not the only reason.

Oia was carefully restored and became a symbol of all things one can associate with the name "Cycladеs" and ideas such as "cosiness" and "desire to stay here for ever." It is so photogenic that one must be a really lousy photograph to make a bad picture; but despite its popularity it keeps sustaining its atmosphere of a quiet provincial place in which you know the given names of the grandchildren of all your neighbours and can exchange with them salt and dried marjoram on a regular basis.

The settlement is small. But when you move your eyes from the crater of Santorini and from picturesque details such as window handles, blue-painted earthen jars and the seducing pillows in the cafes, you find that it has at least two faces. 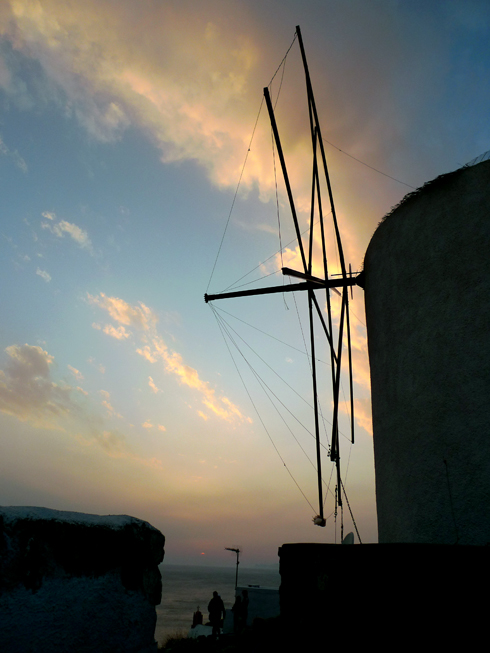 The central area is occupied by the tow-storied kapetanea. Built in the 19th and the early 20th centuries, when Santorini was getting rich from sea commerce, they were owned by the captains of the big ships. Today their first floors are a motley collection of souvenir shops and cheap art, clothing and rubber slippers, books and ice cream, diners.

Down the winding alleys and staircases that connect modest houses on the steep slope, Oia changes. The dwellings are known under the generic name υπόσκαφα, the reason being that they are dug into caves. Here each detail is exquisite to a degree that you might start rubbing your eyes suspecting that Greece has arranged a careful setup to fool tourists. Doors and windows are painted in incredible colours from dark violet to electric blue to cyclamen. The crackier the paint, the more picturesque they are. The bright-coloured waterfalls of the bougainvillea slide along every wall. The smell of fresh basil and sea wafts around, and from the open windows you can see unfurled white curtains and the broken sounds of half-overheard talks. 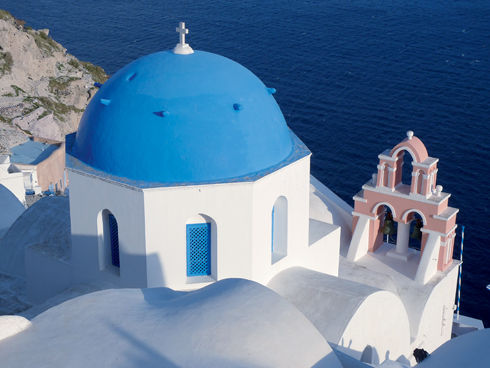 Is this for real? It is. Everything in Oia chants, "Stay."

Many choose to stay and storm the real estate agencies, probably in hopes that their future house will be near the one that Brad Pitt and Angelina Jolie bought here in 2010. Of course the majority of the tourists leave Oia with only the memories of the charm of the old houses, the stunning sunset, the strong Meltemi wind and the soft thrill they felt when they realised that the Santorini volcano is still alive and bound to erupt again one day.

But even this suffices to put down the trip to the island and Oia as "one of my life's most charming episodes."