Nero's Domus Aurea, Louis XIV's Versailles, Ludwig II's Neuschwanstein Castle, the Balchik Palace of the Romanian Queen Marie ‒ the world is full of palaces built on the whims of eccentric rulers. None of them, however, comes close to that of Roman Emperor Diocletian (285–305 AD), in Split, Croatia.

Construction work on the palace started in 293. Diocletian announced that he had started building a palace on the Dalmatian coast of the Adriatic Sea, near the Greek town of Aspalatum, in which... to retire. In the Roman Empire this was unheard of, as traditionally the squabbles for the throne were vicious, and very few emperors died a natural death, let alone went into retirement. Diocletian, however, was true to his word: in 305 he did retire to his newly erected palace. 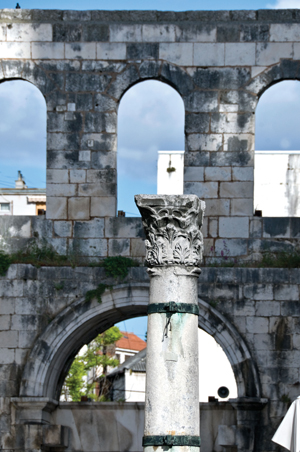 Diocletian's palace wasn't just a place for quiet rest. It was designed to resemble the layout of a Roman military camp

The building was more like a small town. Its external walls were ornamented with an elegant set of arches which rose to a height of 15 metres and skirted a 170x200 metre perimeter. Some 10,000 people were able to live in the royal compound and benefit from all the achievements of civilisation. The palace had its own quay, an aqueduct and even a mausoleum for the emperor. Like all Roman emperors since Augustus, Diocletian was considered a god, and the mausoleum was to be his temple. When in 311 he died (it is presumed he committed suicide), his body was laid in the vault in a sarcophagus made out of porphyry, a purple rock the use of which was reserved only for men of his status. 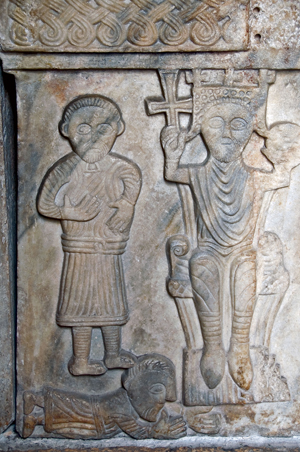 Christian propaganda against the pagan past of Split

But it was not until the 7th Century that the palace rose to prominence. Many years before, the Roman Empire had been torn asunder. The Goths had conquered Rome, and Dalmatia had been pillaged by the invasions of the so-called barbarians. The citizens of the old Roman towns lived in fear of their lives. Under attack from Slavs and Avars, the citizens of the Dalmatian town of Salona abandoned their homes in 639 and sought refuge behind the strong walls of Diocletian's palace. 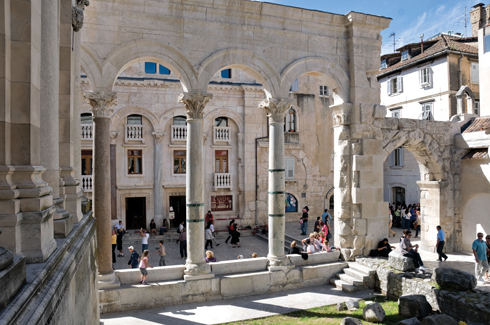 Tourists flock all day round in the Peristyle, in front of Diocletian's mausoleum

The building had been deserted. The new residents gave it a new lease of life by turning it into a proper city. They used the old Roman walls and foundations as construction material for their new dwellings. Later, during the Middle Ages and the Renaissance, wealthy Italian and Croat families used the external walls as the foundations upon which to build their own small palaces. Even a monastery was erected on the walls of the fortress, reached by a steep staircase. The palace's roomy basements, however, were turned into dumps, as the people living above simply dug holes in their floors into which they threw everything they did not need.

In time, the Roman and the subsequent buildings began increasingly to merge into one. After the First World War a decision was made that the buildings from the Middle Ages and the Renaissance should be torn down and that Diocletian's palace should be restored to its original glory. The plan proved unfeasible, however, as the majority of the Roman walls, architraves and arches had now been incorporated into the later buildings, which could not possibly be demolished. 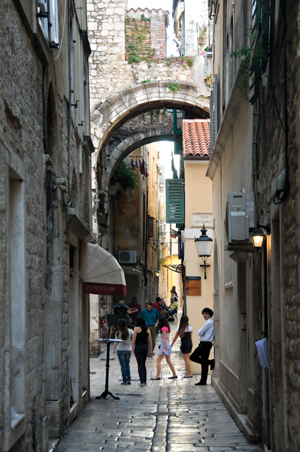 While the palace's medieval inhabitants only restored the original functions of the deserted Roman dwellings and streets, Diocletian's mausoleum underwent a more serious transformation.

Christians never forgot that, during his reign, scores of their co-religionists were martyred and their revenge was comprehensive. The sarcophagus was smashed, Diocletian's remains disappeared and the mausoleum became a church dedicated to St Duje, one of the numerous victims of the emperor's policies. In the 12th Century a Romanesque bell tower was added to the building but, besides a couple of additions such as the edifying reliefs, typical of the Middle Ages, the building remained as it had been during the time of Diocletian.

The nearby temple of Jupiter was also "tampered with." It was turned into a baptistery but its Egyptian sphinx, installed on the wish of Diocletian, remained. The only thing that was missing was its head, which was chopped off. 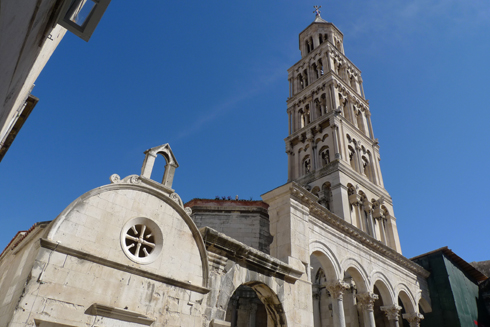 The changes that the city went through during the centuries affected not only its architecture, but also its name. The Greek name Aspalatum and the Roman Spalatum merged into Spalatro and Spalato. The current name, Split, took root in the 20th Century.

The Split citizens changed over the years. The invading Slavs set up their own settlements nearby, and in time some of them moved into the palace. In the Middle Ages ownership of the complex switched between the Croats, Venetians, Hungarians and Byzantines; it was a Venetian possession until the Napoleonic Wars of 1797, and later, between 1813 and 1918, the town was part of the Austrian and Austro-Hungarian Empire. 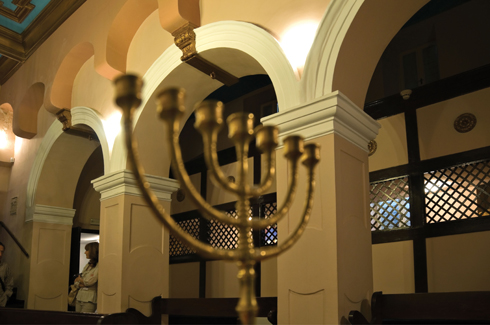 The Split synagogue. Jews lived in Split since the 7th Century and a lot of carved menorahs have been discovered on the palace walls. Now there are about 300 Jews in the city

Today Split has more than 220,000 inhabitants and is Croatia's second largest city. The rivalry between the inhabitants of Split and the people of Zagreb, the country's capital, has a habit of breaking out at football matches between Dinamo Zagreb and Hajduk Split.

There are still some 3,000 people living in Diocletian's palace and the streets of the former busy commercial centre are now filled with tourists instead of businessmen and clerks.

Split is on the UNESCO World Heritage List, and this explains the hoards of tourists that wander in the streets of the palace, and also why an espresso in one of the cafés combines Italian quality with Greek prices. This unique place seems far removed from the romantic desolation that one of the first Western visitors to Split encountered in 1764. 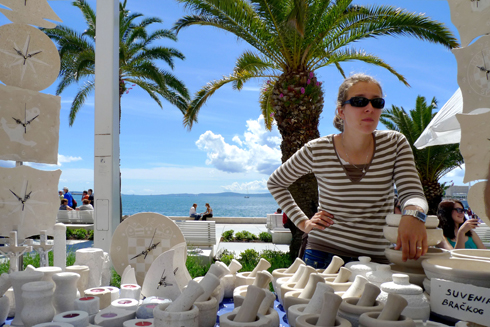 The Scottish architect Robert Adam visited the town as part of his Grand Mediterranean Tour. The Roman ruins incorporated into Venetian palaces, the time-ravaged but still working aqueduct, the semi-decrepit arches and various town dwellers inspired him to make sketches of the place. Adam went on to study the ruins and do a meticulous reconstruction of the palace, which he later published in a book.

Today you can find some of the atmosphere that once enchanted the Scotsman, even if it is not an exact replica. Just get away from the overcrowded central streets and the square in front of the mausoleum and head down the side streets. The centuries of haphazard building have turned them into a labyrinth, which today is adorned with lines of multicoloured washing and advertisements for cheap hostels. The buildings reveal unsuspected delights: the monastery perched atop the fortress wall, sphinxes' heads built into façades, a synagogue. 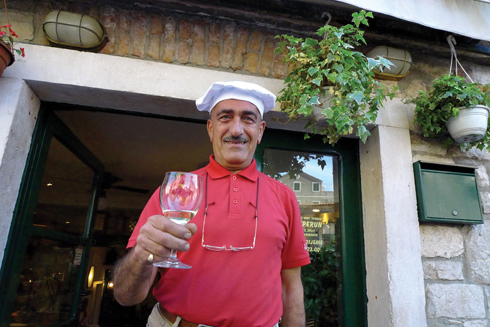 Several years ago Zdravko Banović opened Šperun restaurant in spite of his wife's scepticism. Now the eatery is one of the most popular in Split

Now go one step further, this time outside the palace. Its southern wall is separated from the sea by the Riva Promenade. The citizens of Split have been promenading there for decades, and recently one further pleasure has been offered them – that of complaining how the newly completed renovations have done away with all Riva's erstwhile charm. A park near the northern wall hosts an imposing statue of Croatian bishop Gregory of Nin, by the famous sculptor Ivan Meštrović (1883–1962). One of the statue's toes has been polished smooth by the thousands of people who believe that rubbing it will make their wish come true.

A most rewarding detour involves going beyond the palace's western walls. This area is so densely packed with medieval and Venetian buildings that you'll be hard pressed to notice exactly when you leave the palace. The streets wind frivolously around little shops selling Italian silk, cafés (prices are lower here) and quiet yards in which cats are sleeping and young people drink beer. Wherever your feet take you, however, do your best to find Sperun Street.

The eponymous restaurant, situated around the strategic crossroads, is a sight all of its own. With equal pleasure its owner welcomes guests, recommends local white wines and delicacies such as škripavac cheese and grilled orada, or bream, and reminisces about the Swinging Sixties, which he spent in London.

Unlike Diocletian, he has no intention of going into retirement.