THE LAST OF THE BOGOMILS

The altar in one of Jajce's catacombs depicts the dualist idea that the world was made of the conflicting forces: Darkness and Light © Anthony Georgieff
Bosnia and Herzegovina still bears traces of the time when a persecuted heresy became an official state religion

No matter where you are, be it in a city, a village or the middle of the countryside, the landscape of Bosnia and Herzegovina can be described in just four words: mountains, rivers, bridges, cemeteries.

The mountains and rivers have a wild splendour, the bridges an Ottoman grace and the newer cemeteries stand out for their sheer number and the recurring dates of death – between 1992 and 1995.

Some of the cemeteries in Bosnia are much older, however. The people buried in them lived in the 12th-15th centuries. Back then, the small yet stubbornly independent Bosnia managed to survive despite the constant attempts by both East and West to conquer it.

There is hardly a settlement in the country that lacks a mediaeval cemetery. Some are small, while others have over a hundred graves. Wherever you stumble across them, the scattered tombstones and stelae produced of the local grey stone, jointly referred to as stećci, are a sight you will never forget.

The surface of each stele is covered with strange reliefs. Decorative suns, moons and stars shine from the stone, while spirals and triangles merge into complex figures. Horsemen gallop by, while men and women dance the horo. Many feature the same motif; a man with a long moustache and long arms raises his hand in greeting. 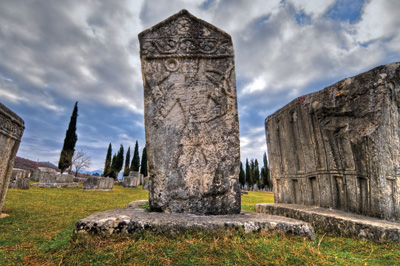 Sometimes the sculptors chiselled only a cross with or without grapes growing from it, but in other cases they covered the stelae with sumptuous images. Historians believe that a particularly ornate sarcophagus from Zgošća near Kakanj belonged to King Stjepan II Kotromanić of Bosnia, though it bears no inscription.

The crosses show that Bosnia's mediaeval cemeteries were Christian, though the inscriptions on the stećci might lead you to think otherwise. They bemoan the loss of life and only rarely express a faith in the soul's immortality. "I lived a peaceful life, I prayed to God and did no harm, but on this very spot where my tomb stands, I was struck by lightning. Why, oh God?" asks the stećak (singular of stećci) in Humsko, Foča on behalf of its owner. "May this hand make you think about yours," says a man buried near Radimlja, in the area of Stolac, one of the best-known Mediaeval cemeteries in Bosnia. "Mother, why did you bear me into this world?" a young man bemoans his untimely death in the same cemetery.

The people buried under and in the stećci were Christians and they called themselves krstjani, too. But they were neither Eastern Orthodox nor Roman Catholics. Their doctrine was so eccentric that the Orthodox denominations regarded it as heretical and the great powers of the age, from Byzantium to Rome, took on the task of uprooting it. There were even crusades organised against this heresy, but nobody managed to stamp out the Bosnian Church. The local rulers soon realised that their peculiar religion was a political instrument in their struggle for independence, and so what everyone else considered a heresy became the official state religion in Bosnia. 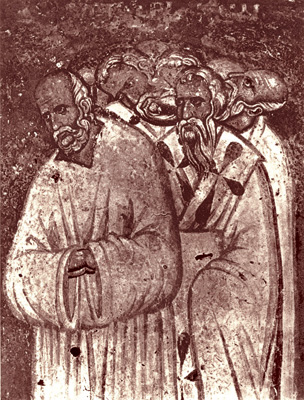 A strange decision. What is known about the Bosnian Church is limited mainly to what its enemies, amongst whom was the Inquisition, thought about it. According to the prevailing opinion, the church was the offspring of a teaching that rejected any form of earthly authority: Bogomilism.

The Bogomils appeared in the Bulgarian lands of the mid-10th Century. Christianity had been the country's official religion for about a hundred years, but in this short time the church had become so corrupt that many had lost faith in it and turned to other manifestations of religious devotion. One of them was eremitism. It became very popular and a hermit in the Rila Mountains became so famous that today the Bulgarians venerate him as their national saint: St Ivan Rilski of the eponymous Rila Monastery.

Others took the road of heresy. The Bogomils first appeared in the area around Plovdiv. This region had a long tradition of unorthodox beliefs. It was where a considerable number of Paulicians were transplanted to from Asia Minor. From them, the Bogomils borrowed an idea whose roots can be traced back to Zoroastrianism: that the world was created by two powers, good and evil. 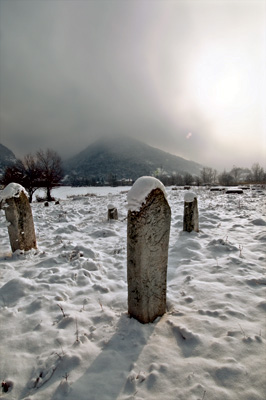 The devil, the Bogomils believed, was the creator of the visible world. All things material, such as food, wine, sex, the state, wars and the organised church, were his work. A believer had to do everything in his power to suppress the temptations of the flesh.

The authorities and the official church vehemently objected. The Bulgarian monarchs continuously tried to root out Bogomilism and its numerous offshoots. The Byzantine Empire had encountered similar problems and in the 12th Century even burnt a Bogomil leader, Vasiliy from Plovdiv, at the stake. These persecutions made some of the Bogomils head west. They reached northern Italy and southern France, where they became known as Cathars, Patarenes and Albigensians. There the Catholic Church persecuted them even more severely.

Some of the Bogomils settled in Bosnia. There, if the most popular theory is to be believed, they established the Bosnian Church, with its rather humble monasteries and simple hierarchy, at the head of which was a djed, or grandfather.

But whether the Bogomils actually founded the Bosnian Church is just a theory. The fact that a creed based on the denial of secular authority could become a state religion implies a contradiction in terms. The Bosnian Church conducted services in Slavic and the cross was a widely used symbol but, according to Presbyter Kozma, a Bulgarian writer from the mid-10th Century, the Bogomils rejected all prayers except the Lord's Prayer, implying that God hated the cross, because Christ had been crucified on it.

Bogomilism declared all institutions irredeemably evil, and thus thwarted any attempt to reform them. Because of its strictly introvert nature, it would soon become irrelevant, failing to spawn any creative intellectual revolution of the sort the questioning of the Catholic Church produced in the West.

Alternative theories about the origin of the Bosnian Church abound. Some claim that the stećci were made not only for its followers, but also for Catholics and Eastern Orthodox Christians, who continued living in the country throughout the Middle Ages. Others say that the Bosnian Church was the direct descendant of Christianity before the Great Schism of 1054. The most extravagant theory put forward is that it was established by Franciscan monks.

How the Bosnian Church was born and what its character was remains unclear, but its end is well-known. It came soon after Bosnia fell under Ottoman rule in 1463.

Children on the Balkans are still told stories about the religious intolerance of the Ottomans. However, the truth is that, especially in the first centuries after conquering the peninsula, the sultans were too busy strengthening their rule to risk the persecution of people of different religions. Non-Muslims also paid additional taxes, which made them useful subjects. 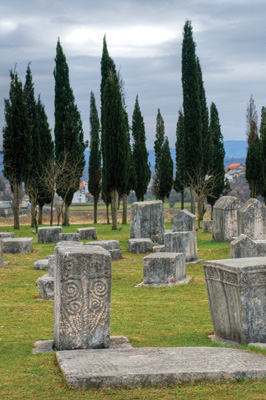 The Radimlja cemetery is the biggest in Bosnia-Herzegovina

The Ottomans did not destroy the Bosnian Church by force. They offered the Bosnians complete religious freedom and protection against their Christian neighbours, both east and west, on one condition: Bosnia had to obey the sultan. It did, though only after some armed resistance and the beheading of its last king, Stephen Tomašević.

Over the following decades, the Bosnian krstjani decided that it was more practical to convert to Islam, as this religion guaranteed their social elevation and allowed them to accumulate more wealth. Today, they are known as Bosnian Muslims or Bosniaks – one of the three constituent nations of modern Bosnia and Herzegovina.

The vestiges of the Bosnian Church are also to be found beyond the borders of present-day Bosnia and Herzegovina. In 2009, the country agreed with Serbia, Croatia and Montenegro to nominate the stećci in their territory as their cultural heritage to be included in the UNESCO World Heritage List.

Another no less impressive legacy of the early Bosnian Church, however, still lingers in relative obscurity. It is the catacombs in Jajce. 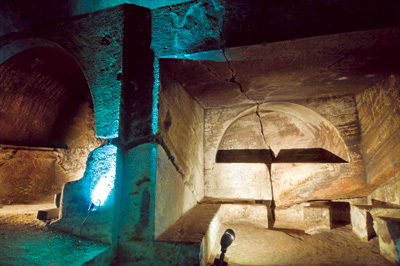 Some Bosnian aristocrats were buried in the Jajce catacombs

Situated in a very picturesque spot, even by Bosnian standards, the town is known for its waterfalls and mediaeval quarter surrounded by castle walls. Under the stone houses in the fortress, which still bear traces of bullets from the Bosnian War, there is a network of underground chambers.

You don't need a particularly vivid imagination to picture what the catacombs of the Bosnian krstjani looked like in the days when they acted as churches, and not as a tourist destination. There is the smell of mildew and it is very cold. The small steps carved in the stone take you to an underground chamber. Other staircases, with steps so narrow that you could easily fall, lead further down, to the most sacred part of the complex.

You will find there a stone altar with a cross, a moon and a sun carved on it. The light coming from behind silhouettes their forms into a suitable backdrop for a religious drama involving the struggle between the forces of light and darkness.

In former times, people lit candles behind the altar; today, there is a floodlight.

The only thing spoiling the mystical atmosphere of the place is the man who sells you the tickets. In the pragmatic style typical of the Balkans, he spends most of his time lurking in the shack that serves as ticket booth, tourist information centre and pub.

Stećci and Where To Find Them 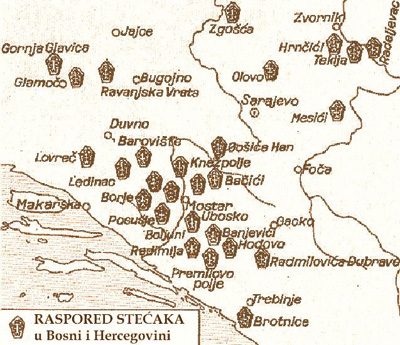 Bosnia and Herzegovina is believed to have about 60,000 stećci, among the best specimens in the area. Neighbouring Serbia, Croatia and Montenegro have about 10,000 more. Some of the stećci form part of the collection of local history museums, but if you are looking for the real experience, you should go and see them in situ. The necropolis near Radimlja, on the road to Stolac, is the perfect choice. Its 133 tombstones stand on both sides of the road.