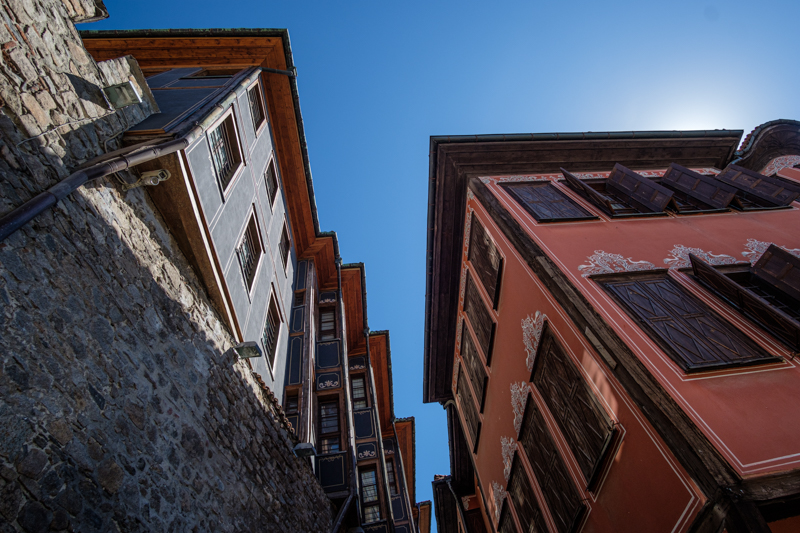 The colourful houses lining the cobblestone streets of Old Plovdiv are arguably the city's most recognisable sight. The only thing that can distract from marvelling at their painted façades, projecting bay windows and verdant gardens is the pavement. Polished by the feet of generations of passers-by, it is slippery even when dry, as traveller and historian Konstantin Jireček noted as far back as the late 19th century.

The mansions were built in the 18th and 19th centuries by wealthy Bulgarian, Greek and Armenian merchants, who traded and travelled far and wide within and beyond the vast Ottoman Empire. The architecture reflected the Ottoman fashion of the day: projecting bay windows, ornamental wood carving and overhanging eaves. However, they have their own idiosyncrasies that have led some Bulgarian researchers to label their style Plovdiv Baroque.

The design of the Plovdiv Revival Period houses reflects the society that created them. Built by men with significant disposable income, they provided luxurious living for their inhabitants. People in other cities and towns usually had ateliers and shops on the ground floor of their homes, but rich Plovdiv merchants were above the idea of combining business and pleasure. Their mansions served only one purpose: to impress the visitor while being comfortable for their families. 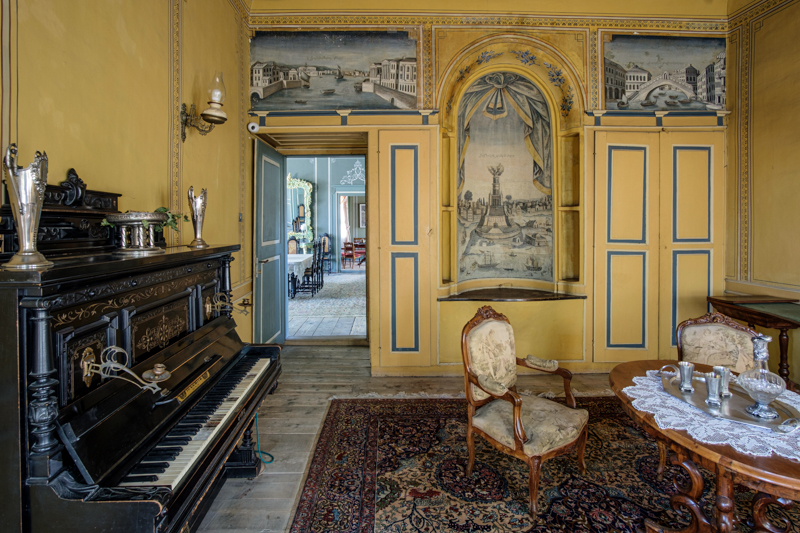 The house of the Armenian merchant Stepan Hindliyan is decorated with landscapes of faraway cities he used to trade with, including St Petersburg, Alexandria and Venice

This was how the distinctive façades of the Plovdiv houses came to be, with their curved bay windows and eaves, bold colours and frescoes of flowers, landscapes and geometrical ornaments. High stone walls surrounded the small gardens, but at least one side of the house opened onto the street, as the inhabitants obviously wanted to keep up with what was going on in the city.

This was particularly relevant for the womenfolk as, according to tradition, no reputable woman should be seen just walking in the streets, unattended by a male relative. A curious architectural invention, unique to Plovdiv, solved the problem. The Klyukarnik is a small projecting bay window at street level which allowed women to keep up with the latest news about town without leaving the comfort of their home. Curiously, Bulgarians all over the country still use the word Klyukarnik as a nickname for Facebook.

The interiors of Plovdiv's Revival Period houses matched their exteriors in grandeur. A large salon took up the best part of the living area, where guests were greeted and entertained in a environment that combined the old and the new. Fine traditional woodcarvings covered the ceilings, but the furniture and the cutlery were imported from the West, while murals of flowers and cities near and far adorned the walls. 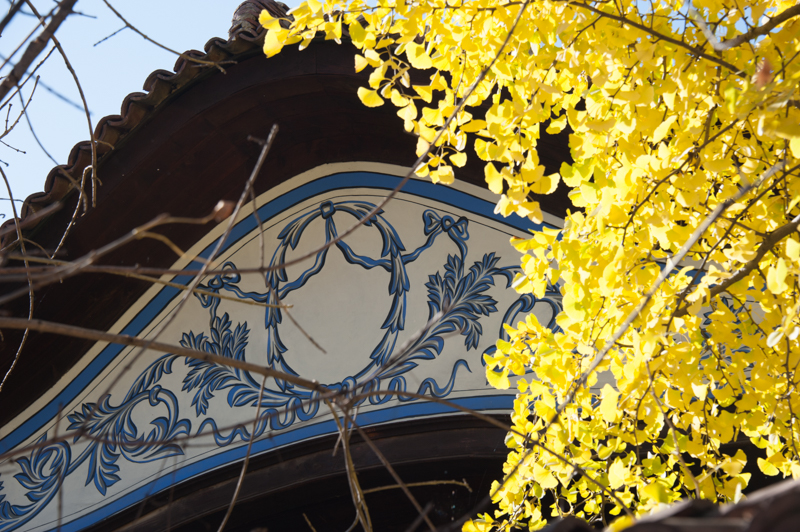 The splendid facades of the Plovdiv houses were designed to impress

The beauty of Revival Period Plovdiv enchants today, but it was not always this way. At the end of the 19th century, Bulgarians became fascinated with Westernisation. Suddenly, the houses of their fathers and grandfathers seemed obsolete, outdated and uncomfortable. Consequently, many houses were demolished or abandoned. By the middle of the 20th century the Old Town was a shadow of its former self, with houses in different stages of dereliction, inhabited only by elderly folk.

Luckily, just at that time the local council recognised the importance of the Old Town and its houses, and started to survey, document and restore them. According to some sources, in the following decades up to 80 percent of the houses in the neighbourhood were restored or built anew. Unfortunately, restoration works were often far from perfect. For example, instead of the original building materials, such as clay mixed with reeds, bricks were used for the walls. Some of the restored murals also have nothing to do with the original decorations.

In spite of these shortcomings, the Old Town of Plovdiv is now a place where the atmosphere of times long gone is still palpable and a significant number of its beautiful houses have become museums and galleries. 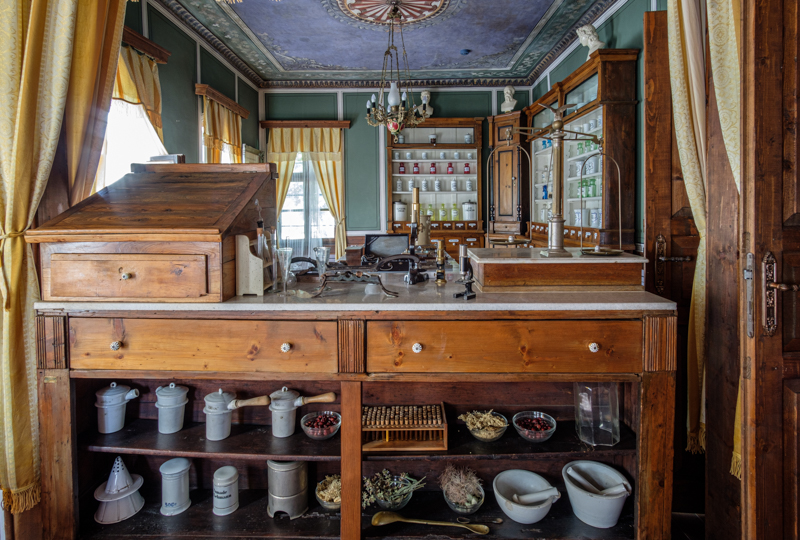 Between 1872 and 1947 the house of physician Sotir Antoniadi was a pharmacy. It is now a museum with vials, drawers, mortars, scales, anatomical dummies and dusty books from the times when pharmacists mixed medicines by hand 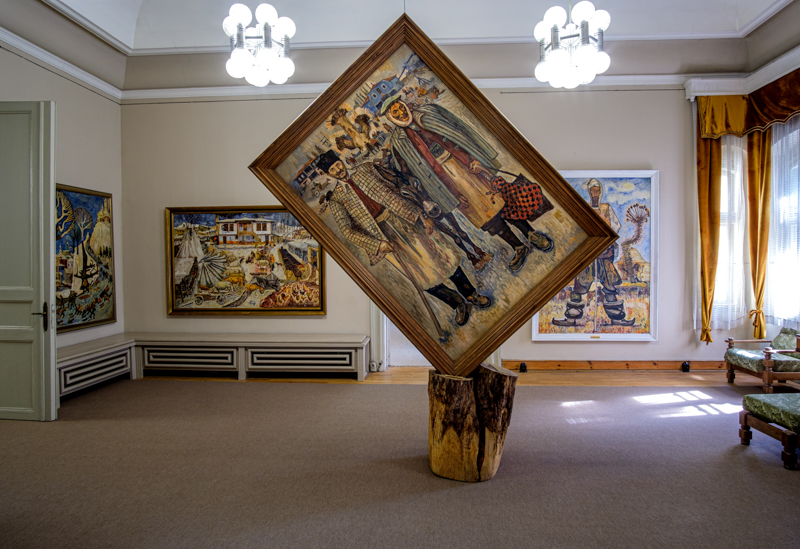 Combining primitivism with expressionism, Zlatyu Boyadzhiev (1903-1976) is one of the most interesting Bulgarian artists. Visiting his gallery in the Old Town, in the house of physician Stoyan Chomakov, is a must 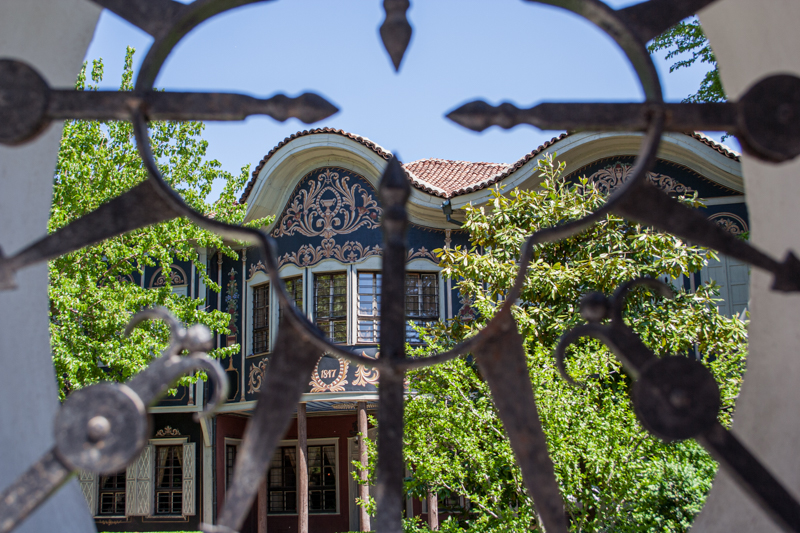