PROMS IN TIME OF CRISIS | VAGABOND Skip to main content

PROMS IN TIME OF CRISIS

Despite the clouds on the economic horizon this year, Bulgarians will still pull out all the stops to celebrate school graduation 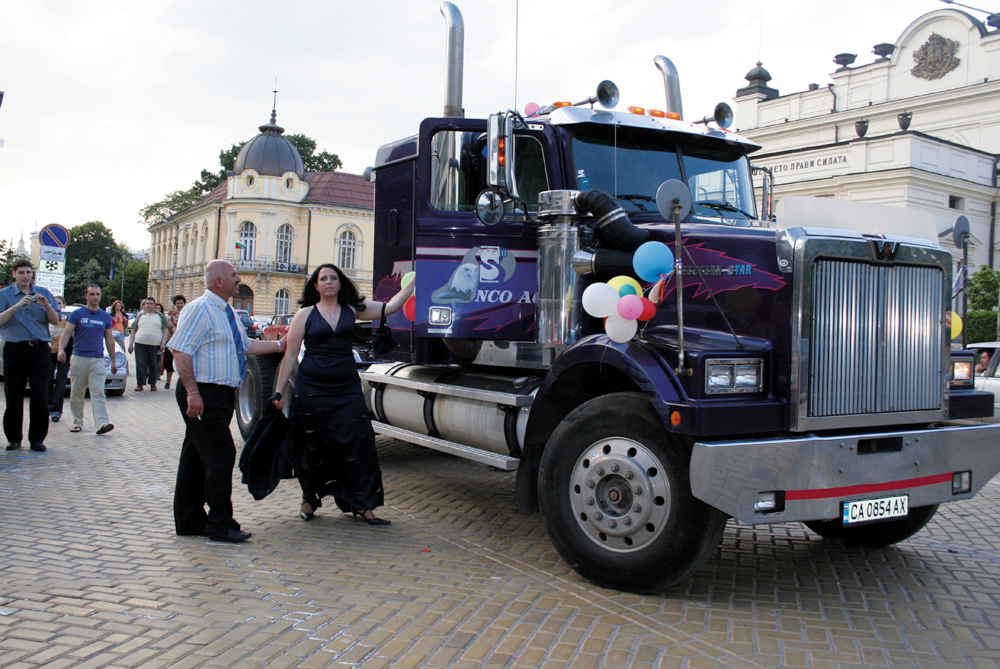 Unocredit Bulbank predicts that Bulgaria will experience a recession in 2009 and 2010, and predictions of an economic crunch similar to that in Asia in 1997 are becoming increasingly mainstream.

Nevertheless, during the last 10 days of May you would scarcely believe that you are in the poorest EU country. The streets of towns large and small alike are chock-a-block with stretch limousines, Audis and BMWs. Half sticking out of their windows are teenagers clad in sumptuous suits and expensive jewellery, or gowns that make the Oscars look like a provincial schoolteachers' get-together.

From time to time, the young folk will stop their cars and, oblivious to the traffic jams they cause, dance in the street. Then you notice that the girls are teetering on such expensive high heels that even Carrie Bradshaw would think twice about buying them.

These are abiturienti, or alumni, who are celebrating their graduation from secondary school. Widely considered to be the "happiest day of their lives," it is a celebration that costs their parents at least 1,000 leva per head.

The money goes on a dress or a suit for the prom and a second dress or suit for the so-called "farewell gathering," when the graduates go to their school for the last time. Then there are drinks and food for the party given at home for friends and relatives, and the rent of an expensive limousine or a friend's luxury car.

Personal grooming comes next: a manicure, plus hair do and makeup, not to mention a solarium suntan and hair extensions.

Daughters are obviously more expensive than sons. Jewellery is a must-have, as well as two handbags, two pairs of shoes and new underwear. Also included are a meal out and the pocket money needed for the round of bars and discos till daybreak. Often, the celebration concludes with a short holiday at the Black Sea or the mountains or, a cheaper alternative, a trip to Turkey or Greece.

The illusion is perfect. For 10 days Bulgaria seems like a prosperous country inhabited by wealthy, happy party-goers whose only problem is an excessive obsession with elaborate gowns and Swarovski crystals.

In fact, the major part of this excess is funded by borrowed money. Even in the heady days of 2007 and 2008, when the economy seemed stable, most Bulgarians relied on loans to prepare for their children's graduation party. It was not a burden. It was simply more important to keep up with the Joneses. Where proms are concerned and mass taste dictates extravagance, few parents – and students – will want to lag behind.

Nobody seems to be perturbed by the image of a girl getting into a limousine outside a shabby block of flats in a rundown suburb, wearing a 1,000-leva dress, and having spent as much again on shoes, make-up, hairdressers and jewellery.

But the economic crisis is here and it can't but affect the abiturienti market. Banks do not give loans so easily now. In January 2009 consumer credit fell by 84 percent compared to January 2008. This is the reason why some enterprising young girls have begun buying clothes on the Internet, availing themselves of substantial discounts in the UK, for example. Fashions are much cheaper than the exorbitantly priced garments and shoes in expensive outlets in Bulgaria – and not as kitschy.

Meanwhile, graduates from previous years have apparently realised that all that remains of the "happiest day of their lives" is an expensive gown taking up room in the wardrobe because it will never be worn again. Websites are full of advertisements for "an exquisite dress in perfect condition, worn only once." A dress by a well-known Bulgarian designer bought for 2,000 leva last year is now worth only 1,000. Mass market models range from 150 to 500 leva.

Sumptuous graduate proms are destined to fall victim to the crisis – either this year or the next. In 1996-1997, when Bulgaria also experienced an economic crisis, many secondary school graduates, or at least those who had no connections, adopted a more practical approach.

Instead of buying a suit that they would not wear more than once, the boys went to the prom wearing a new pair of jeans. The girls bought clothes they could wear afterwards, too. Most of them enjoyed themselves – without spending the equivalent of three months of their parents' income overnight.