interview and photography by Anthony Georgieff
Rate this item
(1 Vote)

From Greece, with optimism

We have meant to sit down and talk for several months now, but events usually overtook us. They did it this time around, too. Just as we were preparing for the long-overdue interview with Greece's Ambassador to Bulgaria, Terry Stamatopoulos... the Boyko Borisov government collapsed, the prime minister stepped down, and Bulgaria was plunged into the most serious moral, political and possibly constitutional crisis since the middle of the 1990s. So, our planned discussion of Greece's hidden gems, which Terry Stamatopoulos knows a lot about, of ancient history and modern pleasures along the shores of the Aegean, and of the 10 best places to visit in Greece this summer was sidetracked by the grim realities of the poor, unstable and increasingly radicalised Bulgaria post-Boyko Borisov.

Despite the current gloom, democracy, as the Greek saying goes, has no deadends, and Terry Stamatopoulos is quick to point out the silver lining of the very dark cloud.

I think that the general crisis of the European and world economy to a large extent accounts for the difficult position many governments in the European countries find themselves in. Many of them have had to take harsh measures to cope with the crisis, which made them unpopular to their citizens and thus prompted reactions by the civil society. We, in Greece, went through a turbulent period with the collapse of the government elected in 2009, followed by the establishment of a caretaker government, which paved the way for a government to be formed after two consecutive electoral procedures. Currently this government is supported by three political parties with different political orientation, but it is functioning effectively. 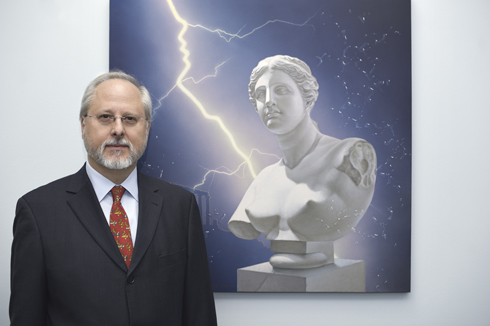 All these events developed in accordance with our Constitution and general democratic values. I believe that it is of the highest importance for any government to have the necessary legitimacy, in order to be able to cope with the pressing problems. In Greece much remains to be done, but the situation has changed for the better and is much more stable now than it was a year ago. Emerging from 2012 with renewed commitment and enjoying significant backing from its partners and its international lenders, Greece shows strong signs of improvement, while confidence in the Greek economy is returning.

We believe that by following the rules and democratic procedures foreseen by the Constitution and with a display of proper maturity by the entire spectrum of the political and social system, solutions, even at the most difficult moments of the political course of a country, can be devised and implemented. Provided that these rules are followed strictly and through the will of the majority of the citizens, events in democratic systems, such as the recent ones in Bulgaria, can be overcome and lead to a workable and even a productive outcome.

With the Greek experience in mind, what should Bulgaria avoid?

I believe that Bulgaria in the past has found solutions about the functioning of its political system and has always managed to overcome periodic crises. Bulgaria is also a member of the EU with an appropriate constitutional framework and general democratic values. As in all political crises, it is of paramount importance that all necessary procedures be in accordance with the rule of law and justice. This is the most important factor, one which provides the political framework. The second important aspect is the timeframe. It will be much better if the procedures concerning the pre-election period until the establishment of the new government are swift, not allowing the urgent (mostly economic) problems of this turbulent period, to remain unanswered, to grow, and to threaten the stability and prosperity of Bulgaria and its citizens.

Finally, proper understanding of what is at stake and an appropriate display of political maturity will be essential to securing a positive outcome to the current situation.

Again – against the background of the political crisis in mind, does Bulgaria remain a good partner for Greece?

The difficult period is not expected to change relations that have been forged between two countries and its peoples during the past several decades. Of course we will remain good partners because, as I have said on other occasions, friends are not only for the good times but also for hardship. There is a high-level strategic relationship between Greece and Bulgaria that goes beyond the limits of the mandate of a specific government. It is deeper and it is founded on the will of our political systems, the positive feelings of our neighbouring people for each other, and on common, long term, interest.

The 2013 tourist season is beginning. Should we expect any inconvenience to Bulgarian visitors and holidaymakers in Greece?

Greece, as every year, is preparing to host millions of visitors from all over the world. Greece is not a destination unknown to the Bulgarian public. Nevertheless, we want to increase the number of visitors from Bulgaria, help them discover new destinations and beauties of Greece and guarantee that they will feel welcome with the traditional Greek hospitality, and spent an enjoyable time in our numerous resorts. Our Bulgarian friends are welcome to spent their holidays in Greece and have nothing to worry about. Protests and inconvenient situations were isolated incidents that took place mostly in limited specific areas in Athens. They did not reflect the real situation in most parts of the city, or in other tourist locations. In any case, they did not concern foreign visitors and can be considered a thing of the past.

Greece remains a safe and hospitable country for all its visitors, and of course, for our Bulgarian friends. According to preliminary data emerging from the Association of GReek Tourism Enterprises, in the season Greece is going to host more than 17 million visitors, compared to the approximately 16 million of 2012. There is data indicating a 20 percent increase of arrivals from the Britain and a 15 percent rise from the Germany, France and Scandinavia. Furthermore, rising demand from Russia, Ukraine, Israel and Turkey has led to a more than 20 percent increase in charter flights.

It is obvious that Greece’s image is changing for the better, but in addition we managed to combine the country’s natural and cultural spots of interest with prime services offered at competitive prices.

What would be your personal suggestion for a trip to Greece? Archaeology? Ethnic tourism? Islands? Modern culture? Food and wine?

I would add the religious and cruise tourism also. Greece has a lot to offer to the visitor in all kinds of tourism and definitely can cover any taste. The choice of course is very personal and depends on what somebody is looking for, or what one considers to be prevalent at a specific point in time. I believe that the majority of the tourist destinations in Greece can combine most of the abovementioned categories of tourism. At a place with long history, diversity of landscape and great gastronomic surprises, coupled with good transportation network, it is not difficult to explore and to combine many different kinds of sights and experiences.

What major developments in Greece in 2013 that may affect Bulgarian tourists do you anticipate?

What is going to affect positively all tourists, not only the Bulgarians, is that all those dark and pessimistic scenarios of 2012 about the course of the Greek economy, like a Greek exit from euro or bankruptcy and uncontrolled riots, turned out to be imaginary. Greece is regaining its self-confidence with huge efforts from its people. Through a successful forthcoming tourism season, we want to signal the ending, slowly but steadily, of the recession. Therefore, prices will remain reasonable and the motivation to provide visitors with the best possible service and experience will remain high.