interview and photography by Anthony Georgieff
Rate this item
(0 votes)

Bulgaria's media need a 'balanced mix' of regulation and self-regulation

In recent years German ambassadors to Bulgaria like to come and go by... water.

As we sit down for a chat in his office in the German Embassy in Sofia (for those not in the know, this is an architectural oddity erected by the former GDR and still preserving some of the lights known as the "Honecker Lamps" – ubiquitous in the East bloc 30 years ago), I cannot help remembering my first meeting with Matthias Hoepfner back in 2009.

He came to Vagabond's offices one early morning – it must have been his first or second week in Bulgaria, and he announced he had arrived on the Balkan peninsula on a ferry from Italy. This happened shortly after his predecessor, Michael Geier – now a retiree in Berlin, but still an avid reader of this journal – had departed from... the Danube port of Vidin, upriver all the way to Germany. Two years later, ambassador Hoepfner sailed all the way through the Bosporus to arrive in Sozopol. 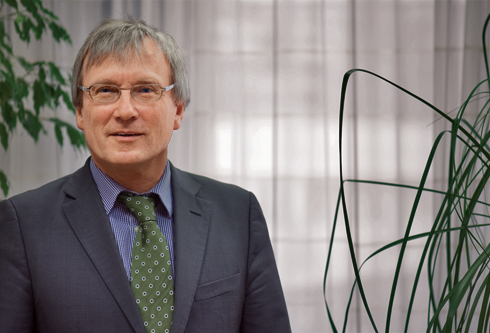 A lot of water has flown under the bridges since then. Bulgaria in 2009 was quite a different country from what it is now. Then, the economic crisis was just beginning, the housing market bubble had not yet burst, foreign investment was still flowing in, expats were vying to buy properties near the Black Sea or in the mountains, and the post-Communist country seemed to be pretty secure on its way to a Western-style democracy.

Obviously, some things have gone very wrong in Bulgaria during Matthias Hoepfner's sojourn here. Because I know that he is a man who measures his words with German precision but at the same time is not scared of running the risk of being billed too outspoken for an ambassador, I go forthwith by hitting the nail on the head.

What would you advise a German prospective businessman to do in Bulgaria in 2013?

My first and most important advice would be: Get to know the country well before you invest your money here.

With only 10 percent corporate tax, a strong macroeconomic performance, a well-qualified work-force and an improving infrastructure the Bulgarian business environment has some obvious advantages.

Yet, there are a number of pitfalls an investor should be aware of. The law enforcement system has a number of weaknesses, especially regarding its predictability and reliability in commercial disputes. Risk assessment and risk management in this country are not always easy.

Therefore, get to know the people you work with and get acquainted with the general conditions of your investment. Look for qualified advice and consult with experts of long-standing experience and personal integrity to avoid bad surprises. The German-Bulgarian Chamber of Industry and Commerce is more than willing to help you.

Second, be prepared to respond flexibly to changes in the business environment. Your future competitors might have some surprises in store. They do not always see competition as a necessary and helpful market economy instrument. Be prepared for sudden administrative requirements you did not expect, and do not exclude sudden changes in the legal framework.

On the positive side, I observe a massive improvement of the Bulgarian infrastructure and a lot of interesting plans and and projects in this field. This means major investment opportunities. They are partly driven by the EU structural funds and other multilateral institutions such as the World Bank and the European Investment Bank, partly they are driven by private investors.

Bulgaria will receive under the new multiannual financial framework more than 12 billion euro net between 2014 and 2020 and is among the four EU countries set to receive more money during the next EU programming period. This is the result of the agreement reached by the heads of government during their last European Council meeting. The increase of over 50 per cent is the largest for an EU country, making Bulgaria the largest net beneficiary in the EU.

Last but not least: Read tenders carefully and be strictly compliant. There is no use in doing business with intermediaries who promise to be friends of certain helpful friends. Do it "the German way": Deliver high quality, be reliable and treat everybody the way you want them to treat yourself.

Whilst they are preparing for a new business venture, what would you advise a German visitor to do in Bulgaria?

Eat "Shopska" with some locals in a "Mehana", go hiking or skiing in one of Bulgaria's wonderful mountain ranges, do not skip the Seven Rila Lakes and the Rila Monastery, and go swimming or sailing in the Black Sea.

One of the major problems facing Bulgaria's democracy at the moment is the plummeting press freedoms. You have personally been singled out for a "treat" by a Bulgarian newspaper which twisted an interview you gave them to censor out some critical remarks, and you responded in an unusual manner by posting a clarification on the embassy's web site.

I find it alarming that, according to the Press Freedoms Index published by Reporters Without Borders, Bulgaria's ranking has dropped from No. 35 before accession to the EU in 2007 to its current No. 87, rock bottom of all EU member states.

These concerns are shared by many of my colleagues in Sofia and other international observers.

In my view, the Bulgarian media are facing three challenges. First of all, concentration of media ownership should be avoided, and full transparency of ownership structures should be guaranteed. Second, there are reports of self-censorship. Third, there seems to be a widespread practice of covert advertising and paid-for media coverage.

These challenges are probably just as dangerous as direct political censorship, because they are less obvious and more subtle. A recent survey published by the Helsinki Committee in their monthly magazine “Obektiv” gives interesting food for thought.

How can journalists be empowered to tackle such "inconvenient" topics?

As a foreign ambassador, I can point to the problem, but in the end it is up to the Bulgarian society and the Bulgarian journalists to find a solution. I believe more solidarity among journalists and more civil society support for independent media are needed.

In today's media-democracy all governments – including the German and the Bulgarian ones – have an obligation and a legitimate interest to explain their policies to the public through the media. On the other hand, they have a duty to guarantee and defend critical and pluralistic journalism. It is in their own interest to strike a fair balance between the two, even if sometimes independent media might turn against them. This is not always an easy task, especially in an election year.

All the more important is a solid set of institutional and civil society-based checks and balances to defend the freedom of journalism. Bulgaria has not yet left its transition-to-democracy phase behind. In my view, there are a number of ways to strengthen regulation and self-regulation of the media. There are also a number of options to improve the necessary instruments to guarantee free and fair competition in the media business.

This alternative is too simple. The government is an important actor in a complex game, an actor who can exert his influence but not decide the game on his own. I am confident that the government understands that the current situation poses risks for Bulgaria’s development.

Is there anything that Germany can do?

Our German political foundations, which are represented in Sofia, as well as the German Embassy are trying to help, for example by informing Bulgarian politicians and relevant actors of the Bulgarian society about the legal and ethical framework of the media in Germany.

We have established in Germany a balanced mix of cautious regulation, limited to just a few key aspects and combined with a strong system of self-regulation.

We have invited Bulgarian media experts and members of Parliament to Germany to acquaint themselves with this approach.

What do you expect from these exchanges?

I expect that such exchanges support the necessary debate on what can be done in the field of media. No more, no less.

There is no doubt that the media situation in Bulgaria is for the Bulgarians to clarify, but can – and should – the West help?

It is of course primarily a responsibility of the Bulgarian society and the Bulgarian authorities to act. But there is also a common European interest. Media pluralism is among the core values of the EU. My impression is that the EU and its member states have become quite sensitive to these issues.

What concrete steps can we expect if the situation does not improve?

I would generally expect an attentive monitoring. But again: It is primarily the responsibility of the Bulgarian society to follow up and pave the way for positive steps. In this context, I found it very encouraging to see that on 7 February the European Initiative for Media Pluralism was founded with the support of the Bulgarian Media Development Center.