A pleasant-looking Londoner who has lived in Sofia for 10 years presents the capital city's ancient and modern history in an unusually catchy and sexy way, all in the span of just 27 minutes: Sofia – The History of Europe is a documentary that was almost bound to succeed. Its screening on YouTube prompted huge interest from both foreigners and Bulgarians, and generated over 200,000 clicks. Suddenly many in Bulgaria with Internet access started wondering who that well-read and enthusiastic Terry Randall was.

But is this video really a documentary? Terry Randall is still in Sofia, but the truth about him – and Sofia – is somewhat different from what the film's producers claim. To start with, he didn't make the video, as everyone who's seen it thinks. It was made by a group of Bulgarians with access to public funds provided by Sofia Council through the "Programme Europe-Civil Projects and European Practices", in partnership with the Bulgarian Literature Foundation and Five Star Media Producer’s House. Terry's job was to impersonate a historian falling in love with Sofia.

In the documentary I say that I was born in London, which is propaganda. I am originally from Ellesmere Port, which is near Liverpool. Also I have lived in Bulgaria for three years. They thought it would sound better if I said 10. I lived in Ellesmere Port till I was 14 or 15 and then I moved to what was then Rhodesia and next to Zambia, because my father was working in the copper mines. Back in Britain I went to university in Cardiff. Once I graduated with a zoology degree, I became an actor straight away. With other actors we founded a theatre company in Wales and we did shows for three years. After that I moved to London. I was spotted and invited to write and perform in a children's television series which was on Saturday morning in the summer. Then I got married. Had two children. I wrote and performed for some series of the BBC, had a couple of years at Sky Television, and did a soap opera, Brookside, which was set in Liverpool. But apart from that it was mostly voiceover.

How did you end up in Bulgaria?

When I got divorced I thought: What I want to do? Maybe travel. A friend of mine was working in Bulgaria as an English teacher. He said that there was good training here. And I told him: OK, I'll come to Bulgaria if you hold my hand and help me read the Cyrillic. So I did and I was offered two teaching jobs. Acting is very sporadic work so I am very glad I've got teaching too.

How did you become the presenter of Sofia – The History of Europe?

It was most of all social networking in Irish pubs. A friend of mine was asked if he knew someone who could do that. Presenting is very different from acting. I used to think that presenters were talentless and actors were doing a harder job because they were hiding their own personality. So this documentary made me appreciate the presenter's art. There is a skill to it and I have to acknowledge that now.

What surprised you most when you arrived in Bulgaria?

Sofia was a complete culture shock: the noise from the traffic, names I couldn't even pronounce properly. The architecture surprised me too. I'd never seen architecture like that. It's so Eastern European.

Oh, the Communist monuments! There is one statue behind the former King's Palace. It's like the cloak of death with barbed wire. I brought my children to see it and they were laughing so much. You couldn't get permission to display something so negative in public anywhere in England. It has to be beautiful or modern but not in any way like that. I still think that was a joke. And the monument in front of the National Palace of Culture is extraordinarily ugly. You can see the Communist influence in the art – there is no soul, no spirit, so away from any religion, no inspiration. I saw a couple of sculptures which were so nihilistic. But a very good friend of mine is a sculptor so she pointed out the better ones. There are some fabulous ones. There's one near Alexandr Nevskiy Cathedral which is amazing.

How about the traffic?

I wouldn't drive in Sofia. I have driven here, but only cross country to Varna and Dobrich. I wouldn't say it was easy when you hit the roads with a lot of dupki, or potholes. And also people sound their horns, which is not allowed in England. It's noise pollution. So that was also surprising – listening to people sounding their horns in the streets. It's another way of communicating. Everybody is so polite in the streets.

To me at least. That's what other people say, that Bulgarians are rude. But I've never been treated rudely. Maybe an occasional taxi driver but that's it. Maybe because I am a foreigner and they have so much fun laughing at my accent. 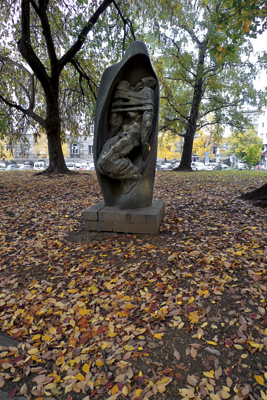 What had you heard about Bulgaria before coming here?

I had heard that the Eastern bloc women were all weight-lifters and looked like men. But sitting out in Varna and watching the catwalk... It was unbelievable! Seven out of 10 women were head-turners. Sitting in Cardiff – I am afraid the percentage is much less. And they do with so little money so well. They have a style of their own. So that was my information about Bulgaria. And football, of course. I was shouting for Bulgaria in 1994 when Stoytchkov was playing, especially against Germany. Because when it comes to football we hate the Germans. I was a complete Bulgarian supporter when your team played against Germany. I was so happy! The whole of England was happy! And around that time as well I was drinking Bulgarian wine. Cabernet Sauvignon was undercutting the prices of lots of wines in England and it was delicious.

Are there any differences in the way people have fun in Bulgaria?

I found it very difficult to break in when I first came here. Everybody sits in groups around tables, then stands up and dances and then sits again. And I was trying to meet people! How? Nobody is meeting anybody in this situation. But I found a few good pubs, some of them Bulgarian, where people mingle. Once that happened, things went fine. People are friendly but a little shy and when they meet a foreigner there is a little bit of suspicion. They need to know a little bit more. And the body language is different. Not only the nodding of the head when you mean "no". Bulgarians are much more tactile. In England that kind of hugging doesn't happen, even when you are married. That was confusing at first.

If you were a copywriter how would you sell Bulgaria? What is its best product – history, football players, easy women?

Oh, no, they are not easy! Trust me, they are not! If they were easy I would be a lot happier. Cheap alcohol and easy women! OK, one of Bulgaria's top resources is the countryside. The rock formations and everything here are spectacular. But Bulgaria needs better roads. If I were a copywriter I would sell the beauty of the country. Really naturally beautiful countryside.