HAIL TO THE SUN | VAGABOND Skip to main content

HAIL TO THE SUN

Bulgarians love to boast the real or imaginary uniqueness of their feasts, from the Kukeri dances to the Nestinari firewalking, and from vine pruning during St Trifon Zarezan's feast to picking of oil bearing roses. What unites these is their long history, spanning centuries and probably millennia. 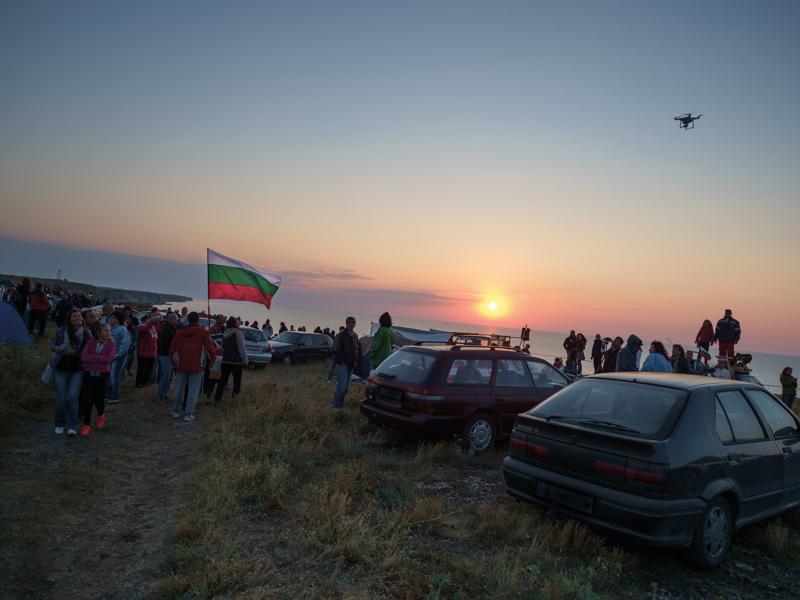 Bulgaria, however, is also the home of a feast that is unique to it yet in the best case scenario is no older than 35 years.

On the night of 30 June and 1 July, people gather by the sea. They spend the night drinking and listening to music, and when the sun begins to rise, they play Uriah Heep's song July Morning. Everyone is happy.

Due to some serious lagging behind in pop culture under Communism and the nostalgia of those who were young back then, Bulgaria is probably the last place in the world where the names of the band Uriah Heep and their 1971 track July Morning still ring some bells.

The feast in question is actually called after that song: its Bulgarian name Dzhulay or Dzhulaya is the shortened and Bulgarianised version.

Dzhulay is the feast of what in Bulgaria goes for hippies, and symbolises freedom, spirituality and the beginning of summer.

Who and when celebrated Dzhulay first is open to speculation and at least two theories, told and retold by self-proclaimed participants in the original event, circulate around. What unites them is the location: the waterfront of Varna. According to one of the accounts, the first Dzhulay was celebrated in 1980 by a bunch of friends who were about to begin their two-year-long compulsory military service. Hippies to the bottom of their souls, they combined the symbolical beginning of their last "summer of freedom" with a song that looked quite topical. In the following years no celebrations were made, as most of the involved were in the army. The tradition was renewed in 1984.

The second account is also connected with the Bulgarian army. During his military service, a hippie from Varna was on fatigue duty on the night of 30 June. While he watched the sunrise on the morning of 1 July, Uriah Heep's song was in his head. Overwhelmed with his loneliness, both physical and spiritual, the man promised himself that from now on nobody will be alone on the sunrise of 1 July. After he was discharged, back in Varna, he introduced the idea to some friends.

They were delighted. The year was 1985. On the following 1 July, they replayed the event; soon the rumour of the Dzhulay spread and dozens of similar-minded people started flocking to Varna.

In both cases Dzhulay appeared as a subtle protest against the Communist regime. How subtle a protest it was is evident by the fact that the authorities didn't ban it.

As the popularity of the event grew, the sun revellers diversified and other subcultures joined the hippies. Inevitably, the hippies felt disillusioned. In the early 1990s they moved to an alternative place on the southern Black Sea coast, near the Varvara village, on the rocks by the so-called Iron Tree, an abandoned movie prop. 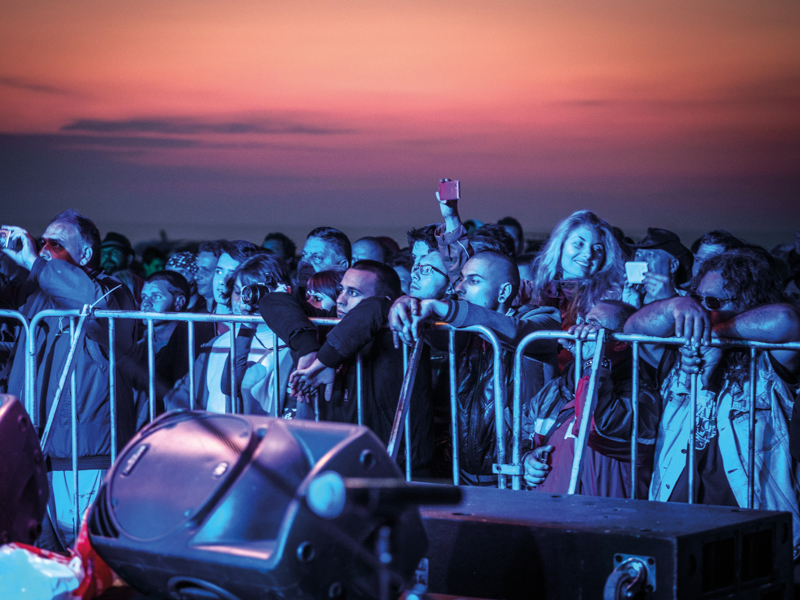 This didn't stop the mainstream-isation of the Dzhulay. The feast attracted more and more people and it gradually moved from Varna to a more picturesque place: the rocks at Kamen Bryag. In 2004, the rock music-loving, young and ambitious mayor of the nearby town of Kavarna, Tsonko Tsonev, invited John Lawton, Uriah Heep's frontman, to perform the band's emblematic (at least in Bulgaria) song during the sunrise. People were ecstatic. Lawton is now a fixture in the "official" celebrations of Dzhulay at Kamen Bryag. His name and the growing popularity of the event turned it into a kind of music festival, attracting a motley crew of rock and hard rock fans, hipsters and people who cannot tell Led Zeppelin from Creedence Clearwater Revival.

As all new traditions, Dzhulay still morphs, searching for its true self (the hippies claim that it has already lost that, sometime around 1992). A dedicated group of people, for example, celebrate not only July Morning on 1 July, but also July Evening on the sunset on 31 July. This tradition is yet to become popular, probably because it lacks a catchy song, or probably because drinking and waiting for a sunset is less fascinating than drinking the night until the sun comes.

Due to frictions between former mayor of Kavarna and his successor, in 2016 the "official" celebration of the Dzhulay will not be at Kamen Bryag. Instead, the event – John Lawton, mosquitoes and all – will be in Tutrakan, on the Danube.

For a number of people, the true spirit of the Dzhulay is not in the particular place. The sunrise, they claim, can be celebrated everywhere in the open, if the eastern horizon is clearly visible. You only need stamina, some booze and plenty of good company to go through the wee hours, until the sun rises. Playing July Morning is recommendable, but not obligatory.

Participants take shelter by Ogancheto, or The Fire, a small natural gas leak at Kamen Bryag 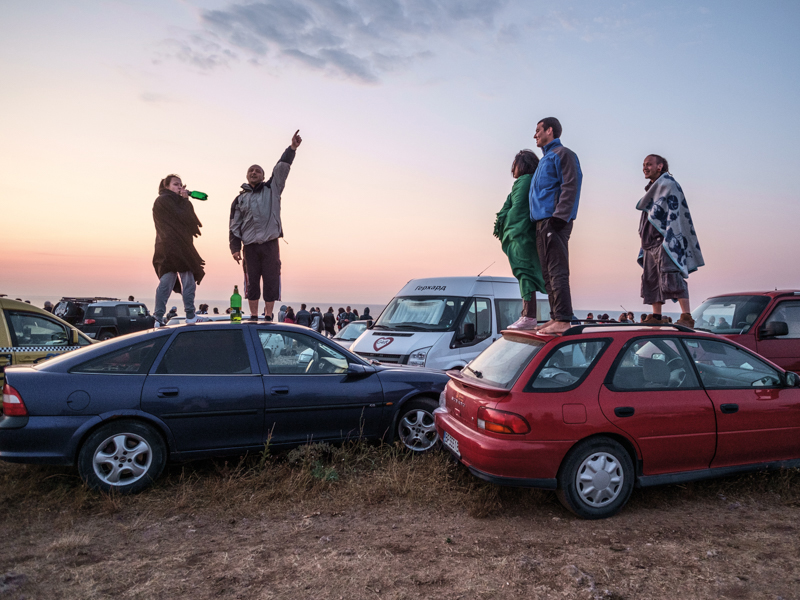 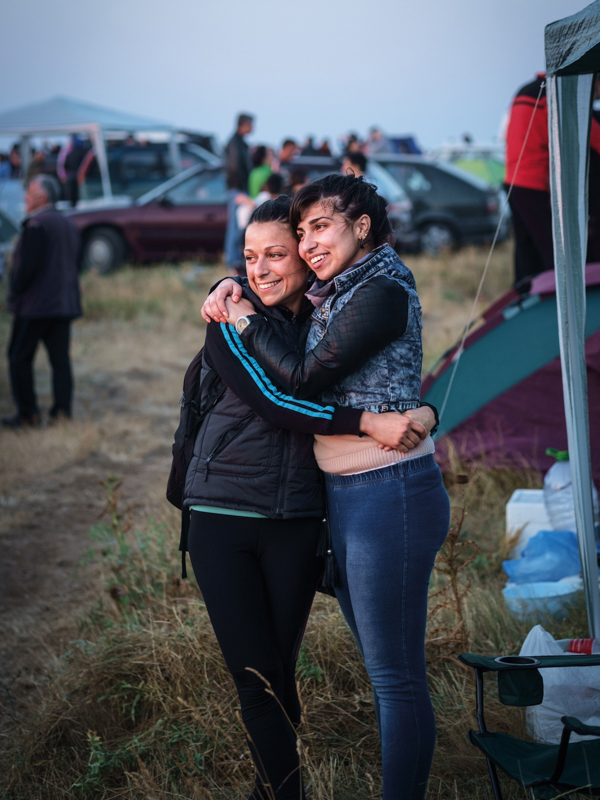 July Morning is being Instagrammed. The modern festival is now far from its hippy origins