"Is there no carnival in Bulgaria?" you may ask yourself on 17 February while watching TV reports about the start of the carnival season in Venice, Rio de Janeiro and New Orleans. The answer to your question will come on the following day, the first Sunday before Lent. In Bulgaria it is called Sirni Zagovezni and is the last day Christians are allowed to eat meat before the 40-day period of fasting. On this day, in a gesture long-forgotten in our everyday lives, people ask forgiveness from their relatives and friends for any wrong they may have done by kissing their hand.

But you will hardly have time to think about this, as early on Sunday morning you wake up to the deafening sound of dozens of cowbells, clappers and rattles coming from the street. Though it does not have a fixed date and can happen any time in late winter or early spring, Sirni Zagovezni is the day that Bulgarians usually choose for their carnival.

The first thing you will realise while watching the procession and the figure at it's head, the kuker, hopping in the lead wearing a huge headdress made of fur, horns and plumage, cowbells, a realistically crafted phallus around his waist and brandishing a wooden sword, is that the Bulgarian festival has nothing to do with that in Venice. 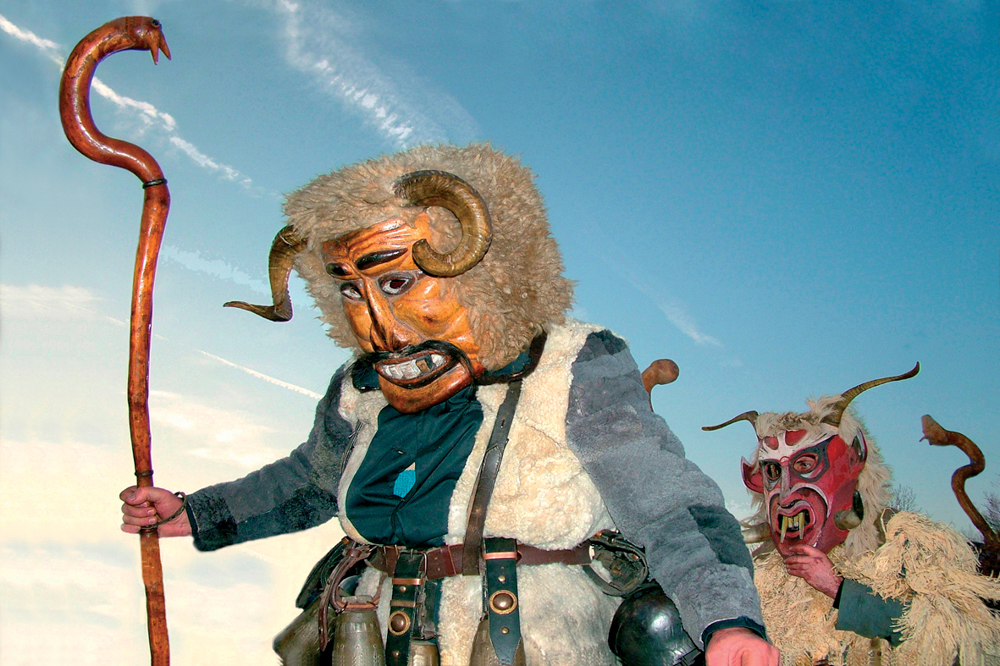 While watching the audience poking fun at the granny (a man dressed like an old, ugly woman, who is the kuker's wife), you realize something else too. Bulgarian mummers' games have nothing to do with the carnival in Rio either. They last only one day and women are not allowed to take part.

This does not mean, however, that the fairer sex is neglected on Sirni Zagovezni. All day long, the kuker chases women around with his wooden sword to bring them health and children, and uses such colourful language that more timid spectators blush with embarrassment. Like others around the world, this Bulgarian carnival comes from an ancient holiday celebrating the revival of nature. The Sixth Ecumenical Council in Constantinople tried - and failed - to ban it in 680. 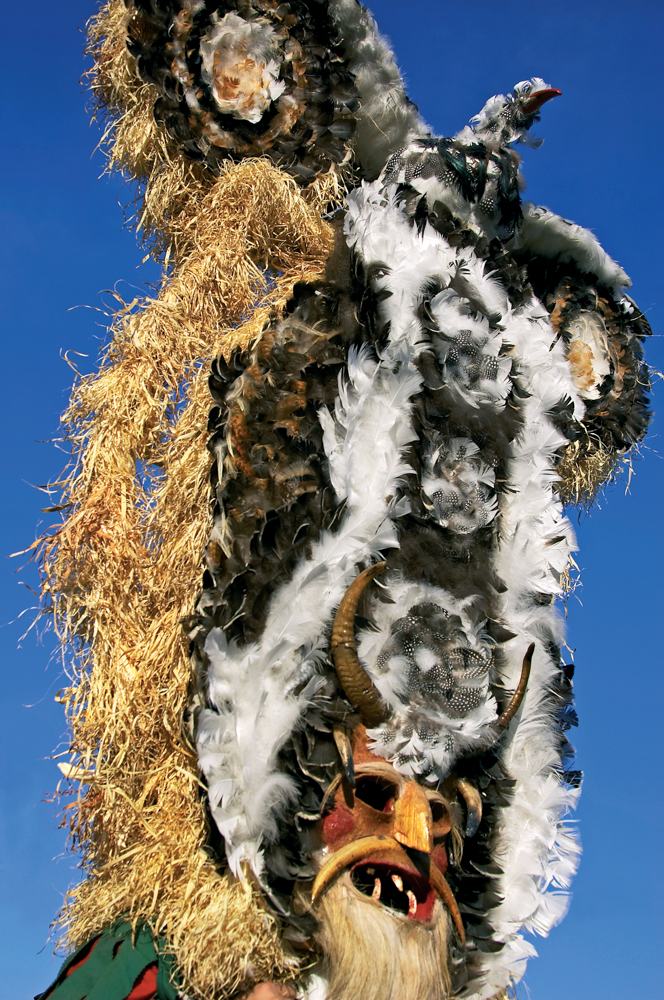 Nobody knows why the most important figure in the Bulgarian carnival is the comical, yet frightening kuker: kuk means "a funny person who makes faces and jumps". Some say that the games are a descendant of an old traditionwhich was a popular sort of entertainment in Europe in the 13th-16th Century, and was superceded by the carnivals and now preserved only in some parts of Britain, Northern Ireland and Sardinia. The kuker looks like a vulgarised version of ancient Greek monsters, such as the chimera and the griffin, which were made up of parts of different animals. The other participants in the masquerade are real-life characters. The turbulent history of the Bulgarians, who, with an astonishing democracy, liked neither their own rulers nor those coming from other nationalities (Greek and Turkish), has provided the mummers with a wide range of personalities to mock.

The kuker's entourage includes the Orthodox "priest" and the Muslim "dervish", who wed everybody they can lay their hands on throughout the day. The Turkish cadi (judge) passes judgements and the hrachars (Turkish tax collectors) pursue their imaginary debtors, who get let off only if they buy them a drink in the pub. Meanwhile the "gypsies" walk around carrying their "babies" made of rags, "read palms" and try to "steal" anything they can; the "bear-ward" makes his "bear" dance; and the "Arab", a word used in the past to denote anybody with dark skin, "scares off" the children. Enough about the notorious Bulgarian tolerance towards otherness.

The pageant often includes personages who are closer to contemporary happenings than to tradition. For example, you could see the character of "bird flu" among the mummers in Lesnovo in 2006. 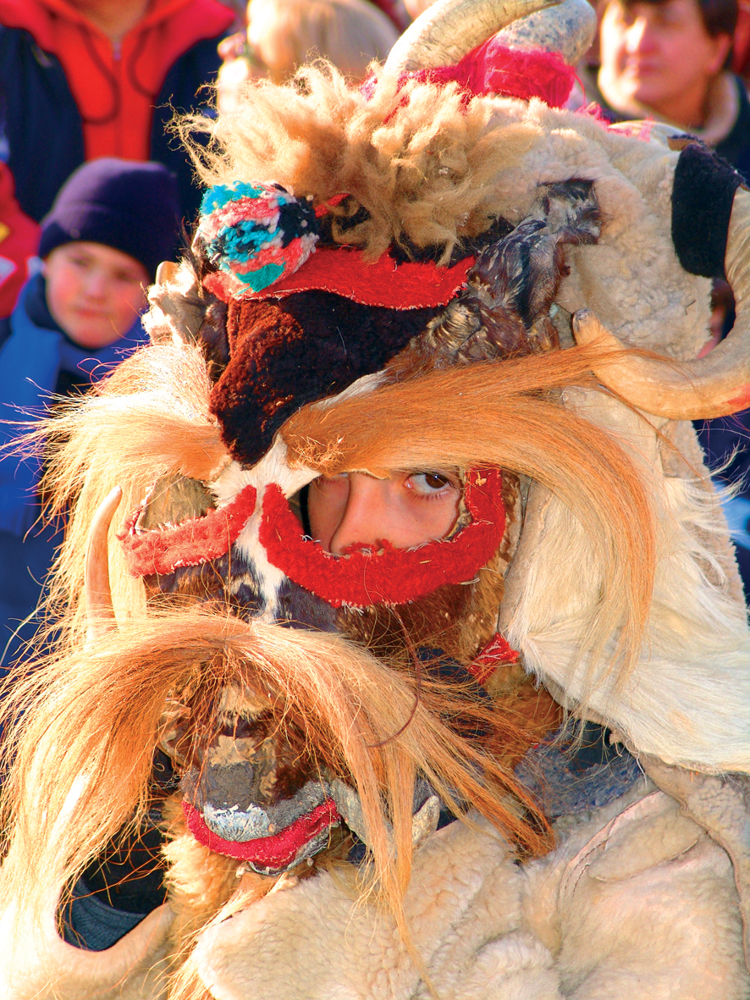 The only one to whom the participants in the masquerade and the spectators seem to pay any trace of respect is the "king". As befits a true monarch, he and his retinue of "bodyguards" are almost invisible throughout the day while the others are cavorting. The "royal" time comes when the rest of the mummers get tired and gather in the square, where a large table is laid. The "king" sits in the most prominent place and when he finishes eating (traditionally, he shouldn't take the food himself; his "bodyguards" feed him), he blesses the crops, the people, the livestock and the fields. Then he begins symbolically ploughing and sowing, putting all the masquerade's players in a harness.

The Bulgarian festival can't compare with the splendour of the Venetian carnival or the opulence of that in Rio. But the hullabaloo of dancing kukeri, who clang their cowbells simultaneously, will probably take those of a more romantic mind back to the dawn of mankind, when the idea of a holiday for fertility was still unadulterated.

Unfortunately, in the majority of places in Bulgaria, you will probably not hear the festive clatter in the street on the morning of Sirni Zagovezni. Common throughout the country a hundred years ago, today mummers' games take place in only about 70 settlements, some of which, like Pernik and Yambol, organise them as festivals.

*The photographs are from the national photographic exhibition and competition Kukerlandia 2006. Kukerlandia 2007 is being held from 17 February until 3 March in the George Papazov Art Gallery in Yambol