While the denizens of Sofia are pondering over whether the name of Sofia's airport should be changed from Vrazhdebna, which means "Hostile," to something friendlier, the airport itself is becoming increasingly hostile to both its customers and its long-standing partners.

No, it's not about delays, lost luggage, the collapsed and still unrepaired awning in front of the new terminal building, the lack of benches in the park next to the airport, the mente taxi cabs charging London-plus fares to get you into town, the most expensive coffee in Europe or the December fog. No, it is none of that. It is Bulgaria's Airport Magazine, Highflights, known through the years to hundreds of thousands of both domestic and international passengers, which was distributed free at all Bulgaria's airports and which informed and entertained you during your long waits in the airport buildings. Plamen Stanchev, the airport's chief steward, decided with a stroke of a pen that the airport no longer needed an airport magazine – and thus deprived his customers and staff of the only piece of printed information they could get hold of for free inside what, from an European perspective, is a rather uncosy terminal. 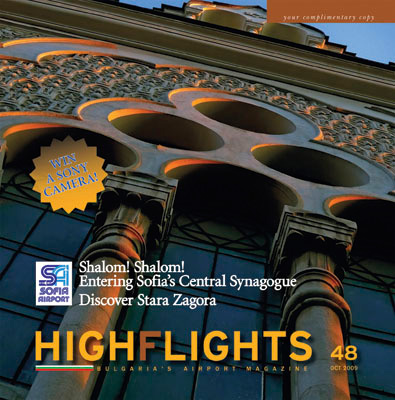 How did he do that? He decided to charge Vagabond Media, the publishers of Highflights, to distribute the magazine at the airport. To put it another way, he decided to demand money from the people who were doing him a service.

Typical Bulgarian way of doing things? Unfortunately, whenever there is any interaction between a private business and any branch of Bulgaria's state administration (unlike Burgas and Varna, where the airports are run by Fraport, Sofia's airport is owned by the state and supervised by the Ministry of Transportation) things may go that way. Unless, of course, you are willing to resort to "unsound" trade practices.

So, as of 1 January 2010 Sofia Airport will no longer have a magazine. Bring your own reading material because the only bookshop in the airport, a very useful outlet run by Ciela, has also closed down – the airport management was demanding exorbitant rental fees.