Comfort and security for pets are paramount for Dave
When the holiday feeling fades, harsh reality steps in for many Britons

Truck Driver Turned Kennel Owner Dave Smith, 68, moved to Bulgaria from Grimsby in May 2005. Although he had visited over 80 different countries as a continental truck driver, the lure of cheap property in Bulgaria was his deciding factor for settling in Klimentevo, a quiet village populated by pensioners.

Dave's venture “Varna Kennels and Cattery” is relatively new, set up in December 2007 in the garden of his home. Living alone, he decided it would be an ideal way to supplement his UK pension and further his passion for animals. He spied a gap in the market, allowing him to combine a pleasure with earning money. He says, “The English love their pets and when they go to the UK, they need somewhere to leave them.” He believes that expats prefer to place them with a fellow Englishman rather than a Bulgarian because many of the Bulgarians' animals “either die in the winter because of weather conditions and their short length of chain or in the summer due to dehydration or lack of care”.

The kennels are purpose built, designed for comfort and security, and include an insulated roof to protect pets from freezing winter temperatures. Dave's business ethic is to provide complete care for each individual pet. He stresses, “I'm not doing this just to pay the bills, but also to provide somewhere safe for the animals to stay whilst their owners are away.”

A dog owner himself, Dave says, “My only qualification for running the kennels is that I love animals and want the best for each one.” He has strong beliefs on the stray dog situation in Bulgaria and although he respects the work of a few charities, which pick up stray dogs and castrate them, he believes it would be much kinder to put them down humanely.

Dave's marketing strategy has involved widespread advertising in the Varna area. His car is emblazoned with his company logo, he has printed and distributed leaflets, and he has erected distinctive yellow signposts directing prospective clients to the kennels. His long-term goal is to run the business profitably and to gain the reputation for being the best place to leave pets, whilst away. He's not looking to make millions, just to keep himself and his own pets comfortable and happy. 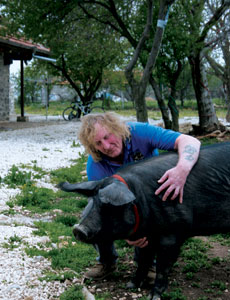 One of Stuart and Mandy's pets

From Care Home to Guest House

In March 2005, Stuart Giberson, 57, and Mandy Jean Cole, 45, moved to the village of General Kantardzhievo from South London. At the beginning of 2007, the couple turned their enormous traditional Bulgarian home into a Bed and Breakfast business called The Old Winery.In the UK, Stuart was a heavy goods driver and Mandy a care assistant. Whilst their previous employment provided them with no experience in their chosen business, they recognised a distinct gap in the market. “There is a lack of B&Bs in Bulgaria and we saw the potential in the property we owned.” Stuart adds, “There are too many package holidays available. Personally, I would prefer to stay in a country house in a rural village and overlook the Black Sea, using Albena and Varna for entertainment purposes when I wanted.” Realising that there would be plenty of other people who wanted the same holiday experience, Mandy and Stuart decided to open up their home to paying guests. Their target clientele at the moment are the British holidaymakers, although all guests are given a warm welcome from this fun loving couple.

The Old Winery is a beautiful traditional country house with five spacious bedrooms, three bathrooms, a lounge area and amenities such as air conditioning, televisions in every room and a swimming pool. Stuart says that their aim is to make everyone feel welcome and to make their experience in Bulgaria a good one. Mandy adds, “We're happy to run our visitors to the beach when they want and whilst we don't offer a full board service, if somebody walked through the door at 9 o'clock at night starving, we would not send them to bed hungry.” 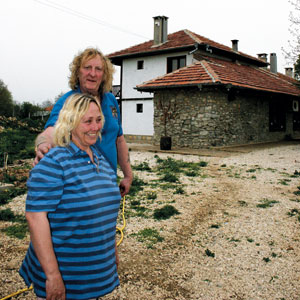 In the first year of opening, the B&B attracted 11 families and couples with no advertising whatsoever. Stuart recognises that the business is in its infancy, however, and doesn't yet make a profit. They are now actively advertising with leaflet drops, their own website, advertisements with two tour firms and a series of PR interviews predominantly with satellite TV companies. Future plans include renovating the barns to make extra rooms and putting a barbecue and bar area in the neatly manicured garden.

Even if the B&B does not pay its way, Stuart and Mandy are very happy living in Bulgaria. Stuart sums up the feeling well, “Bulgaria is like an old pair of slippers, it's comfortable even if it doesn't look its best.” 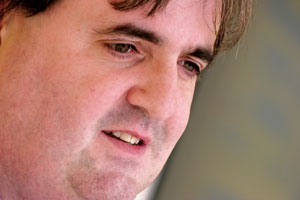 Darrin Best, 41, moved from Essex to Obrochishte three and a half years ago. He chose the village because of its close proximity to the northern Black Sea beach resorts and because its infrastructure and friendly community made him feel at home.

Darrin has a wealth of experience in the UK housing market having spent 15 years as a manager for a housing association and a councillor for his London borough. Unfazed by the fiercely competitive market, he Darrin brings british expertise to real estate and constructioncame to Bulgaria with the notion of setting up his own estate agency and started GOBG. “When I first moved to Varna there were around 500 estate agents. I reckon about five percent of the Bulgarian population works in real estate, which is absurd.” Darrin believes that the key to his success and indeed the success of any business is advertising. “I used Yahoo and Google search marketing in the first year, but now I have roadside ads, leaflet drops and business cards.” His business premises are located in the Hotel Bulgaria in Dobrich and he markets property and land from Varna and its environs to Shabla and the Romanian border. He also manages renovation projects and building work for his clients. Darrin chose Dobrich because he could see interest in the town mounting as the prices on the coast increased.

Initially, he experienced a few technical hitches starting his business, in particular getting a fully-functioning website. “If your website is not working properly then neither are you.” He also found Bulgarian builders extremely frustrating. “Every Bulgarian thinks they are a master at building when they are not. They have no concept of deadlines.” Darrin solved this problem by having British builders work alongside the Bulgarians and this has lead to his reputation for high quality results.

GOBG's primary market comes from the UK. He has put a lot of effort into satisfying his clients' needs by offering a complete service: from collecting clients from the airport to building their houses. This attention to detail has lead to GOBG's success and the business provides Darrin with enough money to pay the bills. He has some exciting plans for the future with a possible expansion into Romania: “There are similar laws in Romania to Bulgaria, the only issue is the lack of flights to the Romanian coast. However, this will change in time.”

Tony Buckhold, 45, moved to Bulgaria from Peterborough in March 2004 to open a hotel in the small seaside resort of Kranevo. He decided to move to Bulgaria because, “it wasn't like Spain where property values were falling. Bulgaria was a nice cheap option.” Tony's background is in haulage, but he always harboured a dream of running his own bar or hotel abroad.

On his initial viewing trip to Bulgaria he was looking to buy a house, but shared his business ambitions with a local man who like most Bulgarians, had a friend selling a hotel. Tony viewed the hotel, The Kres, that day and the rest is history. “I hadn't anticipated owning my own hotel business quite so soon, but I took one look at The Kres and knew it was the right move.” The hotel's location in Kranevo proved ideal. “It still has its charm, as well as restaurants, shops, nightclubs and one of the best beaches in Bulgaria. It's perfect because it is close to the larger resorts, Albena and Golden Sands but not as noisy.”

The Kres is also the only British hotel and bar in the town, which has the added benefit of attracting local expats to regular weekend events like pool, darts and bingo. The expat business sustains Tony through the winter months, although business has steadily grown over the last three years. In the first year of operation it attracted friends and family. By year two, Tony had obtained all the necessary paperwork to operate a hotel under Bulgarian law and he started to attract a wider clientele. The hotel is fully booked throughout the summer season. Tony travels to the UK regularly and finds that his frequent visits drum up even more business.

Tony enjoys his new occupation, but wishes that he could have a little more of the summer for his own enjoyment. He also finds the mountains of Bulgarian bureaucracy and inspections associated with running a hospitality business here very frustrating.

Each year, Tony has made improvements to the design and layout of the hotel and what was once “a typical Bulgarian building, cheap and unfinished” is now a comfortable and stylish concern, which offers guests more facilities including a swimming pool. In the future, Tony is planning to extend the hotel, although admits that he has yet to decide exactly how. His ideas range from a sound proof open-air bar to rental apartments, but when you own your own business, the sky's the limit.

Leaving the rat race and earning your daily bread is not as easy as some people may think. British expats lured over to Bulgaria by cheap property and low costs have found that the reality of making a living and occupying their time becomes of paramount importance once the holiday feeling fades. Many have been able to realise business dreams or combine work and pleasure. Setting up a small business in Bulgaria is not a get rich quick formula. Generally, expat businesses provide a small income, which pays the bills and puts food on the table whilst allowing people to enjoy their idyllic life on Bulgarian soil.