In a country with the cheapest booze in Europe, many Brits stand out as heavy drinkers. But are not the Bulgarians to blame?

Is the expat community full of certified alcoholics who, instead of spending their time in Bulgaria visiting cultural sites and learning the language, sit in English bars watching satellite TV and hitting the bottle? Equally, is the indigenous male population full of alcoholics who on waking at 6 am reach for the nearest rakiya bottle?

Bulgarians would have us believe that expats are the ones with serious drinking problems, whilst my experience here would rather suggest otherwise: the Bulgarians are the real heavy drinkers. Rakiya, the national tipple, is at the root of Bulgarians' love of alcohol. I have yet to come across a household where there is no rakiya to welcome guests with. Indeed, to refuse a glass is frowned upon, and to introduce yourself as a teetotaller is equally odd. Nevertheless, I keep coming across numerous Bulgarians who tell me, "We thought the Russians were heavy drinkers until we met the British."

Bulgaria has the cheapest alcohol in the EU, costing around 30 percent of the EU average. This, coupled with the tobacco products that are at least 50 percent cheaper than in the rest of the EU, makes the country a party animals paradise. Pavlin Naydenov, chairman of the Association of Producers, Importers and Traders of Alcoholic Drinks, maintains that a great deal of the alcohol sold in Bulgaria is illegal and that this largely explains the low prices. It's easy to see why visitors to Bulgaria may increase their alcohol intake the minute they see a bottle of vodka for 6 leva. However, for the local population these prices are not necessarily low, which is why many turn to home brews.

According to a nationwide survey among 1,550 adults in Bulgaria, 50.7 percent of men and 13.6 percent of women drink on a weekly basis. Such statistics have led medical experts worldwide to acknowledge that alcohol is among the key causes of the majority of diseases and untimely deaths in Eastern Europe. The survey showed also that drinking was least common among the elderly, people living in villages and people describing themselves as poor – a somewhat shocking discovery, as my own experience of village life would have suggested that the male population of all ages and income groups were all serious drinkers. Yet the data prove that these people are mere amateurs compared with city dwellers with higher education and incomes who were classed as heavy drinkers imbibing at least 80 g of alcohol a day. 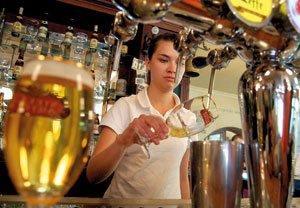 With such beautiful scenery and an enticing climate why would people need to seek solace in a bottle of alcohol? The fact is that many young Bulgarians are disillusioned with their prospects here regardless of the kind of job they hold. Elderly people have little to live on, are similarly disillusioned, and many hark back to the fact that life under Communism was at least life with low prices.

So how then can the Bulgarians label the British as heavy drinkers? It would seem that the answer lies in the holiday mentality.

Typically, British tourists visiting Bulgaria save all year for their two weeks of freedom from the shackles of the rat race. They descend on the beach and ski resorts and, amazed by the low prices, quaff excessive amounts of alcohol, giving the impression that this is a perfectly normal behaviour in the UK. The fact that back home consuming alcohol whilst working or during lunch breaks is banned by most employers is irrelevant – most Bulgarians are oblivious to this. In Bulgaria drinking during the course of the working day is considered perfectly acceptable. Construction workers regularly down beer and rakiya with their lunch, and then return to potentially hazardous work. And prolonged "wet" lunches are de rigeur amongst the qualified labour force in the large cities.

To compound the belief that British are confirmed alcoholics is the fact that Bulgarians observe expat communities living in permanent holiday mode; without work to fill their time they start to drink more and for longer periods, and many have developed serious drinking problems whilst living in Bulgaria. Another phenomenon in Bulgaria is that so few women drink, whereas in the expat and tourist populations the girls are sometimes matching the boys, pint for pint. Whereas younger Bulgarian women are changing the general male attitude here, middle-aged and older women were relegated to positions of cook and cleaner the minute they got married, and are not expected to drink excessively. In the West, the I-Hate-To-See-Women-Who-Are-Drunk-but-It-Is-OK-for-Me-To-Drink-'til-I-Pass-Out attitude went out with the Dark Ages.

Alcohol is responsible for many accidents and deaths, particularly on the roads. In Bulgaria there appears to be no stigma attached to losing your driving license or indeed being on probation due to alcohol-related incidents. In the West such punishment goes with massive stigma, can make headlines in local papers, and lead to the loss of work and social status. Yet in Bulgaria, being arrested with an unbelievably high blood-alcohol level is reported with some glorification; a recent article in the Bulgarian press told of a 25-year-old man who admitted to drinking 20 litres of beer before getting in his car.

The man was arrested with a blood alcohol reading of 8.15 per thousand! The legal limit in Bulgaria is 0.5 per thousand, and readings of 4.0 per thousand can be life threatening if not fatal... The media reported police at the crime scene as saying, "This man has actually set a kind of national record among drunk drivers for 2008." Three years previously, a man from Plovdiv registered a blood alcohol level of an astounding 9.14 per thousand.

He had just knocked over a pedestrian, but was totally conscious and chatted with the police as he took a breath test. Due to the exceptionally high reading, the police began to worry that their equipment was malfunctioning. In the end five separate lab tests confirmed the initial reading.

An American friend from the US Peace Corps once told me that whilst partying with some Bulgarian student friends, one of their middle-aged teachers arrived and started buying his students, aged between 18 and 20, tequila shots. Indeed he drank with them, and when the bar closed in the small hours he invited everyone back to his apartment for more merrymaking. One drunken student severely cut his hand when he tried to open a bottle of wine, but this was not seen as a problem. The now drunk teacher drove the boy to a hospital where he received a number of stitches. Back at school on Monday, everyone, including the teacher, was recounting tales of the great night out.

Yet my friend pointed out that if this occurred in America, the teacher would be arrested and indicted, as well as fired. Parents would be outraged that their children, even though they were over the age of consent, were put at risk by someone in a respected position. The national media would further smear the man's name by descending on the town to cover the story. The thing that amazed my friend the most was that in Bulgaria such behaviour was considered normal and acceptable.

There can be no doubt that alcohol is responsible for violent and irresponsible behaviour – it wrecks lives, breaks up marriages, causes injury and insult, as well as unnecessary hurt and anguish. With expat drinking on the rise it will not be long before the media start to pick up on stories about bar brawling Brits with record alcohol readings, and the legendary reputation as being the world's biggest set of alcoholics will continue to our detriment. However, as the EU and foreign investors pump money into Bulgaria's economy rapidly improving the infrastructure as well as fighting corruption and instigating improvements to many public agencies, for the Bulgarians the real question is whether these will be enough to change their national attitude, behaviour and mindset.