Urbanisation may eradicate the Islamic community of Bulgaria's Alians

You can almost feel the sap rising in the grass, flowers and foliage in the meadow. Spring is at its height and summer is just around the corner. The crust of the spit-roasted lamb is brown. The fat dripping onto the flames returns to the air as aromatic smoke, which mixes with the hubbub produced by the crowd who have gathered in the open to celebrate 6 May in the same way as their ancestors did – with songs, dancing and roast lamb.

These people are not celebrating Gergyovden, or the Day of St George, the patron saint of shepherds and the Bulgarian Army, revered by all Bulgarian Christians. Few Bulgarians know that 6 May is also a holiday for the Roma and Muslims in their country. For the former, it is Ederlez, the day on which they begin their nomadic way of life. The latter call it Hıdırellez, Hedrelez, Hadırlez or Adırles. For them, it is the festival of spring.

Among the religious communities for which 6 May is a holiday, this is one that stands out from all the rest. Its members, numbering slightly over 50,000, are Muslim. They have lived in the area of Razgrad and some parts of the Eastern Rhodope Mountains since the 15th and 16th Centuries, when they settled there during the first years of Ottoman rule. They are a fraction of a larger diaspora, which is concentrated mainly in central and southern Turkey and has between 15 and 25 million adherents.

The Bulgarian group is close knit and prefers to keep a low profile, having existed for centuries in isolation. The most famous of their saints' tekkes, or tombs, are Demir Baba Tekke near Isperih and Ak Yazılı Baba Tekke in the village of Obrochishte. Sunni Muslims regard the people from this Shi'a sect as heretics. As for Christians, they do not even know of its existence and label it with the general term "Muslim."

In Bulgaria alone the sect is so little known that it goes by four different names.
Meet the Bulgarian Aliani, Alevii, Kazalbashi or Bektashi.

Hıdırellez is the only day in the year when they abandon their self-imposed isolation and appear in the limelight. For them 6 May marks the beginning of their New Year. Alians believe that on the eve of the holiday two wandering prophets, the guardian of the land, Hızır (as written in Turkish, or Al-Khidr, as it is known in Arabic) and the guardian of the seas, Ilyas (the Muslim name of the Prophet Elijah), met by a flowering rose bush. They remained there all night, telling each other of their experiences.

A rose does not appear by coincidence in this legend; in fact, nothing is coincidental in the rare legends and stories that the secretive Alians let slip. The rose is one of the main symbols of their faith. There is a good reason for this secretiveness. For centuries after dervish Hajji Bektash Wali founded this religious movement in the 13th Century, the Alians were persecuted as heretics.

Their faith has Shi'a roots. The Alians believe that Ali, a cousin and son-in-law of the Prophet Muhammad, was his true heir. They also believe in the existence of the Twelve Imams, the infallible successors of the Prophet of Islam, the last of whom is the awaited Messiah.

To define the tenets of their religion as Shi'a would be an oversimplification. Alianism is only about 800 years old, but it seems like a concise encyclopaedia of the religious ideas and movements that have appeared in the Near East and Asia Minor over the past 3,000 years. From the sparse information available, it seems the Alians borrowed some of their beliefs from a now nearly extinct religion, Zoroastrianism. Their beliefs also show traces of Byzantine Manichaeism, which taught that the world is ruled by twoforces, those of light and darkness. Last but not least, the Alians are Sufi. They believe that the union that man can achieve with God is entirely personal and based on personal experience.

One of the direct consequences of this belief is that the Alians in Bulgaria do not have mosques and their principles are the ultimate in religious tolerance. "The differences between Christians and Muslims are as thick as an onion skin," Bulgarian Alians say. Their beliefs also include such ideas as "The important thing is not religion, but to be a good human being" and "If you hurt another person, the ritual prayers you have done are counted as worthless."

As for their women, they have never worn veils or headscarves, because true faith is shown with the heart, not with clothes. They do not observe Ramadan fasting and drink alcohol. 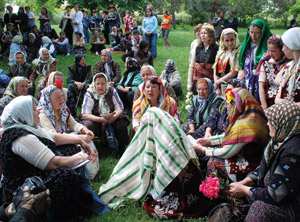 The Alians shroud their rites and beliefs with a dense veil of secrecy and, as they were based on an oral tradition, only began writing religious texts relatively recently. They do not seem to mind the influx of pilgrims and curious visitors from many other denominations to the tekkes of their saints. At Demir Baba Tekke, you will meet any number of Sunnis, Roma and Orthodox Christians who believe that the "Iron Father" will cure their illnesses. The tomb of Hassan Baba near the village of Bashtino in the area of Kardzhali has recently become popular with members of all religions as a spot that can heal and protect you from danger.

A tabloid newspaper even recorded that Bulgarian soldiers from the country's now disbanded contingent in Iraq had gone on a pilgrimage there before the start of their mission.

This combination of openness and secrecy surrounding the Alians has made them the subject of urban myths. One story claims that during their evening service, which they call cem, men and women will exchange their shalwars and engage in extramarital sex. This is probably one of the oldest – and still unconfirmed – rumours in the world. As far back as the Middle Ages, the church authorities in Christian Europe used to tell similar cock-and-bull stories about any unorthodox movement that sprang up in their midst.

There is some verified information about the cem, however. Its finale is a ritual dance called sema and while performing it, the Alians establish a direct connection with God.

In 1952 an ethnographic expedition discovered an Alian manuscript in the village of Sevar, near Razgrad. It described the life of the greatest saint of the Bulgarian community, Demir Baba, or the Iron Father.

The one hundred pages of the manuscript are full of stories where the complex symbolism with which the Alians enshroud their faith blends with the dashing narrative about the adventures of Demir Baba. He was a strange kind of saint. So great was his strength that he was dubbed Demir, or Iron. He never hesitated to use his power to the glory of Muhammad and Ali. The young saint went to the kingdoms of the Tartars and the Moscovites, where he vanquished two terrifying dragons in impressive style.

Afterwards, he joined the Ottoman forces on their march to Austria and Central Europe and his appearance on the battlefield always caused consternation among the Christian forces. Demir Baba's victories persuaded many people to convert to Islam.

Then, to the relief of his opponents, the hero called a halt to his career as a fighter. This happened when he received a letter from his mother. "I thought I'd given birth to a saint and it turned out he was a rascal," she wrote. Demir returned home immediately.

The feats of Demir Baba are very similar to those of St George, who also killed a dragon.

There are other marked similarities. Worshippers at Alian tekkes light candles. On the day before Hıdırellez, Alian girls and women put small personal belongings into a pot full of water. On the holiday, they gather together and one of them takes out the hand mirrors, hair slides or rings with her eyes closed and prophesies what the coming year will be like for their owners. Before urbanisation caused many Orthodox Bulgarians to leave their villages, Christian girls would do the same, but on Enyovden, or Midsummer Day.

Same rituals, different religions. The Alians in Bulgaria remember the centuries-old lesson of their ancestors that everybody is equal before roast lamb and bugeoning nature. But this simple, yet important knowledge is in danger of being lost. An increasing number of young Alians are choosing to seek a better life in the cities, where, under the pressures of materialism and MTV culture, they gradually forget the traditions of their forefathers.