Three years ago, in New York, distinguished Bulgarian photographer Ivo Hadjimishev was having dinner with Nellie and Robert Gipson, a Bulgarian- American family, who had sponsored educational and museum projects in Bulgaria for years (see Vagabond No. 23, August 2008).

Filov visited Lozengrad, now Kırklareli in Turkey, and made a drawing of the tomb near the village of Raklitsa

Their conversation moved on to the organisation and preservation of photographic collections and A History of the First Bulgarian Empire, Sir Steven Runciman's 1930 book. Then Ivo Hadjimishev told the Gipsons something that he had just learnt – a collection of old glass photographic plates of cultural monuments taken during the 1912–1913 Balkan Wars had been put up for sale, and was already attracting the interest of international collectors.

The Gipsons began to dream. If they were lucky enough to buy the negatives before they were sold to anybody else and probably taken out of Bulgaria, they could make an exhibition and an album with the most interesting images. The collection of photographs could then be donated to the Bulgarian state. 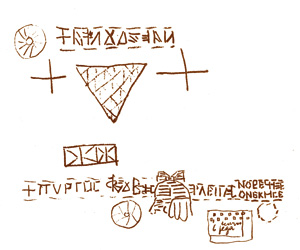 Detailed drawing of the big tower in Serres

Their dream came true. The archive, comprising 290 photographic plates, was purchased by the Gipson's foundation, with the support of the American Foundation for Bulgaria. The photos were transferred onto a digital medium so that they could easily be accessed by museums in this country and abroad. After being displayed in the Gipson Archive 1912–1913 Return to Bulgaria 2009 exhibition at the Ethnographic Museum, the collection is now kept in the General Department of Archives, in accordance with the donors' wishes. 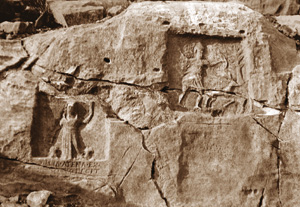 After the negatives were purchased, specialists tried to identify the images on them. The 17 boxes of glass plates dated 1912–1913 turned out to be an intriguing journey back in time to a lost Bulgaria. What Hadjimishev saw in the photographs of Eastern and Aegean Thrace and the Vardar area of Macedonia was the old towns of Odrin, Lozengrad, Strumitsa, Salonika, Philippi, Drama, Bunar Hisar and Serres. There were Bulgarian soldiers and officers and the people they met, tombs, churches and fortresses. However, even the scientists from the Ethnographic Institute who were part of the identification team could not recognise the less-known buildings and those settlements that were not specifically identified.

The key to deciphering all the photographs seemed lost for ever. As for the photographer, the mystery deepened. Who was the man who had travelled around the area during the Balkan War and took, developed and inscribed the negatives? 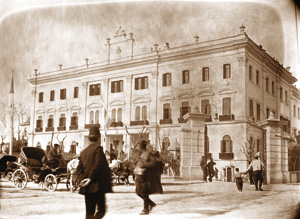 A building in Central Salonika, 1912

A few days before the exhibition opened, a strange coincidence provided the solution to the mystery. Following a recommendation, Ivo Hadjimishev read Travels in Thrace, the Rhodope and Macedonia, 1912–1916, by Dr Bogdan Filov, an archaeologist and founder and director of the Archaeological Institute in Sofia at the time. The 1993 edition also included A Diary of Travels in Macedonia and the Area of Odrin, 22 October – 23 November 1912 and 16 December – 26 April 1913. Amazed, Hadjimishev discovered that the detailed descriptions in the diary were the same as the notes under the photographs and inscriptions on the plates and boxes, or fitted some of the people in the images.

"A consultation in the Archaeological Museum revealed that there is an album about the last stage of Filov's expeditions, in 1916, and that the glass plates were thought to have been broken. The travel permits signed by the then Education Minister Ivan Peev did not mention a photographer for these expeditions. But in his diary, Filov had often written 'I took' or 'we took' when referring to the pictures described." For these reasons, Hadjimishev is certain that he has discovered photographs taken by Filov himself. 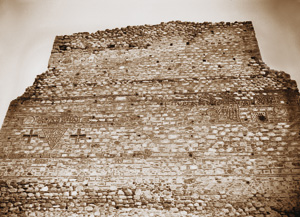 Bogdan Filov is at least controversial in modern Bulgarian history. He graduated in classical philology in Germany and then studied archaeology in Bonn, Paris and Rome. He had a brilliant scientific career in Bulgaria and was the first to start professional archaeological excavations in this country. He studied some of the most significant architectural monuments, wrote treatises on Roman and Thracian history and history of art and worked as the director of the National Museum and the Archaeological Institute. He was also a university lecturer, rector of Sofia University and head of the Bulgarian Academy of Sciences. 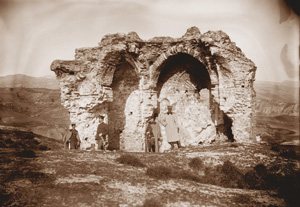 Serres, 1912 - the ruins of a cross-shaped Byzantine church remain in addition to the big tower

But science was not the only field in which Dr Filov was active. He became minister of education in 1938 and prime minister two years later. While heading the government, Filov supported the Law for the Defence of the Nation, a Nazi-style racial purity act designed to target the Jews. He was the one to sign the pact by which Bulgaria joined Nazi Germany in the Second World War and deported over 11,000 Jews from parts of Macedonia and Western Thrace, then under Bulgarian administration. After the death of King Boris III, he was a regent of the young King Simeon II until the 1944 coup, when he was arrested. He was shot in the back of the head and buried in a bomb crater in Sofia's cemetery on 2 February 1945, after being sentenced to death by the Communist People's Court, together with the other regents and most government ministers. His name was deleted from all publications about Bulgarian archaeology. 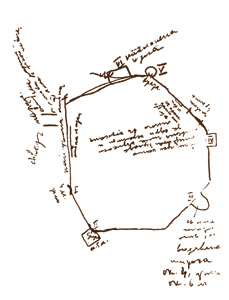 Serres, the fortress's big tower, a drawing by Bogdan Filov

The controversies surrounding Filov's personality support the hypothesis that the recently discovered photographic archive is part of a secret stash of the scientist's possessions. After the series of coincidences that led to the discovery, preservation and deciphering of the glass plates, they are now available to a wide circle of historians. Hadjimishev invites anyone who recognises a place or a face in these photos to help him write this chapter of history which began with the dinner in New York.