What should a Bulgarian do? Believe his or her eyes and common sense, or take in whatever is fed to them by omnipotent Civil Service officials, who can be maddeningly rigid in their attempts to stick to the letter of the law, while sometimes completely ignoring its spirit?

The case of Veselie, until a few years ago one of the last development-free sites on the Bulgarian southern Black Sea coast, provides an excellent, if completely absurd illustration.

As can be seen from the three photographs accompanying this article, taken from approximately the same vantage point in 2004, 2007 and 2010 respectively, one of the results of the construction of a new hotel in Veselie has been the destruction of a stretch of sandy beach in front of the hotel. The former beach appears to have been covered by stones, possibly in order to protect the hotel grounds from being washed away by the sea.

No? According to the Bulgarian Ministry of the Environment and Waters, nothing illegal has taken place. The destruction of this beach is the result of... natural processes. Nature, and not some unscrupulous construction entrepreneur, is to blame.

To understand how manipulative Bulgarian officialdom can be one needs a bit of background.

The Kavatsite-Smokinya-Veselie beach is the first major Black Sea bay south of Sozopol. To the north it borders a once pristine rocky promontory, currently a housing estate where construction debris is still lying around and roads remain unpaved. To the south, it extends all the way to Cape Agalina, an official nature reserve. In total, there is about a mile of fine sand with many dunes, home to the sand lily, a wild flower common enough in the Mediterranean but in Bulgaria found only on this beach.

For several decades under Communism, the whole bay was reserved for holidaying working-class Bulgarians, as well as campers from fraternal Socialist states such as Czechoslovakia, East Germany and Poland. Caravans were in short supply at that time, so people used tents. In fact, erecting your tent at Veselie or Smokinya indicated that you subscribed to a certain, slightly alternative, lifestyle (as much as anything alternative could thrive under a Communist government). The southernmost reaches of the bay gradually evolved into Bulgaria's equivalent of Gilkicker Point: a paradise for East bloc naturists who were banned from every Bulgarian Socialist beach, but were unofficially tolerated here. 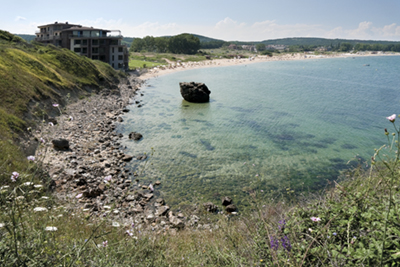 With the fall of Communism in 1989 it emerged, according to various restitution of property laws, that the land of Kavatsite-Veselie bay had been private property nationalised by the Communists in the late 1940s. That property was returned to its rightful owners or to their heirs.

In reality, however, this meant the destruction of whatever tourism facilities had been erected along the bay. The sandy mile south of Sozopol was divided into small plots and allotments, with some owners quick to put up barbed-wire fences around their little properties. In the 1990s and early 2000s the bay looked abandoned, with no one attempting any large-scale construction work owing to the various ongoing court cases between the state and the smallholders, and among the smallholders themselves.

Justice in Bulgaria is slow, but it does bring things to an end in the long run. From the middle of the 2000s, construction work started in Kavatsite-Veselie bay. By 2011, the outcome of this is obvious to anyone passing through: ugly, empty hotels, some of them put up for sale as the economic crisis struck before their owners could pay off their mortgages. There are tons of construction rubbish, the sand dunes are being used as car parks and numerous makeshift bars front directly onto the beach...

It is difficult to assess all the damage done to the environment or to calculate what part of it might be reversible. What matters in this case, however, is the very concrete example of the small, stone covered beach in front of the new Veselie hotel.

According to Bulgarian law, all of this 378-kilometre long coastline is the exclusive property of the state, and cannot be altered without getting a series of complicated approvals. But if it had already happened, how would the state react?

Bulgarian officials rarely answer letters from ordinary citizens, so one good way to start is to invoke the Access to Information Act. A major NGO, the Access to Information Programme (www.aip-bg.org), can help if you need assistance. The authorities are obliged by this law to give you an answer within 14 days. If they don't, their silence is interpreted as "tacit refusal" to grant you the right to information. You can sue, and the courts will order the authorities to give you all the information you seek.

We invoked this law and contacted various state offices in both Burgas and Sofia. These included the above- mentioned Ministry of the Environment and Waters.

Their answers came after a long wait, and various letters and threats of legal action. The Environment and Waters Ministry officials and their subordinates in Burgas simply agreed that nature, and not the human hand, was to blame. We were referred to the Bulgarian Institute of Maritime Sciences and Oceanology for further explanation.

What is black and what is white?