text and photography by Dimana Trankova
Rate this item
(0 votes)

In a country littered with Soviet-era monstrosities, a tiny war memorial for US WW2 pilots causes outrage

Bulgarians are very sensitive to all kinds of monuments. Monuments are OK if they celebrate some kind of a glorious if rather imaginary past – the more distant, the better. The past is safe as there is no one alive to get offended, but monuments can also generate considerable acrimony if they relate to not-so-distant events, especially in the case where Bulgaria's sometimes odd sense of "national honour" is concerned.

A small monument erected near the American Embassy in Sofia has become the latest bone of contention in a country that is very proud of its mediaeval history and kings but that is possibly the only kingdom in Europe that doesn't know where any of its former rulers are actually buried.

The piece in question, funded by the Ancient and Honorable Artillery Company of Massachusetts, is supposed to commemorate American airmen who died over Bulgaria during the Second World War. At a small but emotional inauguration ceremony, James Warlick, the American ambassador, emphasised that this is a monument to everyone who perished in the Bulgarian skies: both Allied and Axis forces deserve their due because both were valiantly fulfilling their wartime duties.

A Bulgarian, Veselin Stoyanov, whose father was an acclaimed Bulgarian pilot who had shot down US aircraft, quoted his father's personal diaries, where the flying ace ruminated on the meaninglessness of war. "Today we stand together under the same flag," Stoyanov reiterated.

About 120 Americans perished in Bulgaria during the Second World War.

Few people in Bulgaria, and ever fewer in the West, are aware of this fact, so a bit of background is needed to understand it better. Seen from Europe and the United States, Bulgaria's 20th Century history is mainly associated with its subservient alliance to the Soviet Union. Bulgaria was the Kremlin's closest satellite in Eastern Europe and it carefully toed the Soviet line to such an extent that at one point the Bulgarian leadership wanted to physically join the USSR as a constituent republic. Before the Red Army invaded in 1944, however, Bulgaria had been an ally of Nazi Germany.

The reasons why a tiny Balkan country would ally itself with Hitler are, of course, many and complex. Some historians surmise that in this way Bulgaria's King Boris wanted to prevent the country from being occupied by the Germans, as Greece and Yugoslavia had been, while others contend that Sofia favoured Berlin for the promise of land, notably Macedonia, Aegean Thrace and Dobrudzha, that it considered its own.

Bulgaria was not a very active member of the Nazi Axis, however, but as early as December 1941 it did declare war on Britain and the United States. The Bulgarian politicians called that war "symbolic," but in 1943-1944 it became quite real as RAF and USAF pilots bombed the cities of Sofia, Dupnitsa, Karlovo, Gorna Oryahovitsa and Kazanlak. Some 1,200 Bulgarians died in Sofia, 1,350 were injured, and 5,300 buildings, mainly in Central Sofia, were destroyed. 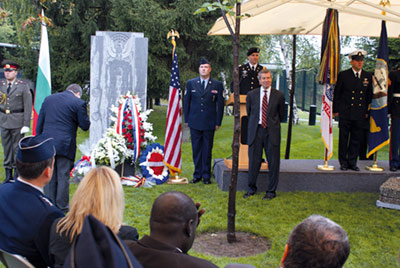 The Americans who perished over Bulgaria were not necessarily attacking the country, however. The thrust of the Allied air campaign was directed at the oil refineries in Ploesti, Romania, a source of fuel for the Nazi war machine. Many of the Allied airmen were shot down while they were overflying Bulgaria en route to Romania. The relatively small number of Bulgarian casualties is usually explained by the effectiveness and heroism of the Bulgarian air defence forces. One of its aces, Dimitar Spisarevski, died on 20 December 1943 in a kamikaze attack on an USAF fighter plane.

Over the next 45 years the United States, Britain and NATO were obviously Cold War enemies.

War is, of course, meaningless and this is what the new memorial near the American Embassy is about. But how did the Bulgarian media and the general public react to it?

The larger media that are usually supportive of whoever is in power at the moment ran their news stories on the memorial tucked away somewhere at the back, as if not offend either the government, which says it is pro-Western, or their readers, whose sentiments are usually not.

The alternative media, however, went hysterical. News24.bg wrote: "A monument to the US pilots who bombed us in the Second World War gets erected." Bg.altermedia.info asked: "Next, a monument to Ottoman heros to be erected in front of the Turkish Embassy?" And the VMRO, or Internal Macedonian Revolutionary Organisation, a political party that consider itself a mouthpiece of "patriotism," officially demanded that a new monument be erected next to the American one to commemorate the victims of the USAF.

Facebook hosted two anti-monument groups, with a membership of over 5,000. "I expect the Bulgarian pilots and air defence artillery to be charged with war crimes because they shot at the good Americans," one member posted. Another retorted angrily: "Get someone to tell the omniscient American ambassador to offer Japan to erect a monument to the Japanese kamikaze in Pearl Harbart (sic). How would the fucked-up Americans react?" And a third summed it up: "Germany did not choose its allies just like that. The Bulgarian Army was a great power at the time. I am proud that we were chosen for a military partner to a great army."

The real insult, however, came from bTV's "Slavi's Show," Bulgaria's most popular latenight TV variety programme. Ivo Siromahov, a senior scriptwriter, said that the monument in question commemorated the US pilots who bombed Sofia. He went on: "If you don't know your history, 2,500 Sofianites died, over 5,000 were injured, over 10,000 buildings were destroyed." Siromahov suggested that the Sofia City Council had initiated the erection of the monument and stated that the Bulgarian pilots who had died in Sofia had just one monument of their own.

In fact, there are two, both near the National Assembly, and Spisarevski is commemorated with a boulevard bearing his name in Sofia, as well as with memorial plaques in Pasarel, and Dobrich.

Tweaked in this way, the news about the new American memorial in Sofia caused justifiable offence ‒ and fuelled the conviction of many Bulgarians that the policies of their country are being hammered out in Washington, just like they used to be hammered out in Moscow under Communism. This is not a new attitude. Since at least the Berlin Congress of 1878, the majority of Bulgarians tend to consider that their country is the victim of some game by the Great Powers who, as a rule, hate it and want to destroy it.

At the same time, Bulgaria is still studded with monuments to the Red Army that hail it as a liberator. The history books keep quiet about some lesser known events: that before Stalin "liberated" Bulgaria in 1944 by declaring war on it and occupying it, the Red Army had conducted air and maritime attacks in 1941-1942. The number of casualties and the details remain unknown.

For the US officials who inaugurated the monument in Sofia, it was supposed to serve as a unifying point between what are now allies in NATO. But as far as many ordinary Bulgarians are concerned, consensus about the past is not only impossible, it is unwanted.