ALL UNDER THE PRESIDENT'S CONTROL

Instead of asking the Did-He-Cheat-Again question, many Bulgarian media fight rumours about a presidential fling

A propaganda machine made up of the media, the secret services and certain business circles appears to have been launched into action to stifle a rumour about a relationship between President Georgi Parvanov and 30-year-old pop singer Mariana Popova.

At the end of July, the Weekend, Bulgaria's best-selling tabloid, hinted that the singer, who had taken part in Parvanov's presidential campaign, had had a fling with him. The rumour resurfaced in other publications as well. Weekend's readership includes many who until recently used to buy "serious" newspapers. 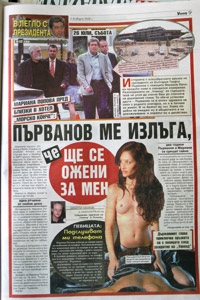 In early August the Weekend came with the juicy details of the alleged love affair. In it, Mariana Popova was reported to be in a state of depression after being rejected by the head of state, who got scared that news of the relationship might leak out. She was quoted as saying that Parvanov had indicated he would be divorcing his wife to marry her, like Nicolas Sarkozy did in France. In the same issue the newspaper portrayed Parvanov as a skirt chaser, listing several Bulgarian female journalists with whom he allegedly had had relationships with through the years. To add injury to the insult, the paper related the affair to Zorka Parvanova, the president's wife, who had undergone cancer surgery at a Sofia hospital.

Obviously, it is impossible to say how much truth there is in the story of Parvanov's extramarital exploits.

What is important, however, is that the Bulgarian mainstream media have done everything in their power not to discover whether this rumour has any truth in it at all. In Western countries journalists struggle to unearth the tiniest detail about a head of state's possible relationships. Clinton was pressed to acknowledge his affair, faced questions in Congress, and was made to testify under oath. The result? We now know all the lurid details of his sexual adventures in the Oval Office.

In Bulgaria, the "serious" newspapers, among them the German-owned Trud and 24 Chasa, remained silent. Instead of sending out the paparazzi, which is what they usually do in far less juicy circumstances, they began publishing articles that showed how healthy and happy the president's family was.

The day before Weekend's article was published, the national television stations broadcast a report showing a blissful presidential couple. Was this a pre-emptive move to parry the rumour?

In the following days Trud and 24 Chasa front-paged the president and his wife under trivial pretexts. An article depicting the Bulgarian president's healthy family life even appeared in Rossiyskaya Gazeta in Moscow.

Next Trud published an extensive interview with Popova entitled "I'm Not the Bulgarian Marilyn Monroe." The newspaper, which until that time had written nothing about the allegations, printed an interview that refutedhem. The interview did not contain a single direct question whether or not Popova had in fact had an affair with Parvanov.

Trud's front pages would again feature the Parvanovs, this time on a visit to a wild birds vet. One photograph showed Zorka Parvanova freeing a young falcon.

The situation evokes an incident several months ago, when some newspapers reported that President Parvanov went hunting in Simitli the day after a tragic train fire near Cherven Bryag.

At that time, Trud, 24 Chasa and other newspapers had no comment on the president's trip to Simitli, yet a few days later published an Office of the President statement which explained precisely what Parvanov did in Simitli.

Shortly thereafter Sega carried a report from Simitli that made it clear that Parvanov had arrived there at six in the morning and together with his retinue had gone into the nearby woods. There were no details about what they did there. A question seems natural - is the head of state lying? The "serious" newspapers, however, didn't ask.

A representative of the State Agency for National Security, or DANS, allegedly met with Weekend's publishers to find out who instigated the article and whether any money had been paid for it. One of the publishers, Martin Radoslavov, denied that any such meeting had occurred. However, the fact remains that the newspaper dropped the story.

In response to a question about whether secret service people had met with Weekend's publishers, DANS spokeswoman Zoya Dimitrova said that no such information was available. "The singer Mariana Popova is not within DANS's competence," she said. In Sofia, rumours circulate in the media circles that leaders of business associations close to the president are attempting to put pressure on certain media to kill the story of Parvanov's alleged love affair. The pressure includes paying money for unrelated ads and PR articles.

Perhaps this is what DANS should be investigating - whether certain business people are trying to buy the silence of the media. Attempts to control the media are a much graver threat to national security than any rumour of the head of state's getting frisky.

Cases like this expose the amalgamation between the media and politics in Bulgaria. In Bulgaria, many members of the so-called journalistic elite consider it quite normal for the president to hand out journalism awards on behalf of the Bulgarian Publishing Association. They also see no conflict of interest with some media receiving presidential "honours" and their bosses travelling on Bulgaria's equivalent of Air Force One at the personal invitation of Parvanov.

Sadly, the Bulgarian media continue to uphold the totalitarian model of Communist Bulgaria, when every order came from a single command centre - the Central Committee of the Bulgarian Communist Party. Now a plutocratic political media establishment seems to decide what is news and what isn't. There are no unexpected guests on TV shows, just as there are no unexpected interviews or scandals.

Without any bow to the tabloid standards of accuracy, it turns out that... the tabloids are the only remaining sources of independent information - and clearly they are under pressure as well.

The case is curious from a legal standpoint too. Anyone who feels insulted by a media report can sue for libel. The tricky thing in Parvanov's alleged fling is to prove whether it was untrue. And this would be a matter for the courts.

In Bulgaria, however, disputes like this are not solved in the courts, especially when politicians are concerned. They are solved behind closed doors. So much for Bulgaria's press freedoms.