Bulgaria has become the last former Warsaw Pact country to open up its secret Communist-era files. Will it do any good?

Have you ever feared that your best friend is reading your mail and snitching on you? Or that you should steer clear of political jokes? It may sound like a chapter from George Orwell's 1984 but it was a reality in Bulgaria just 18 years ago. The state had a huge repressive apparatus called State Security (DS), which monitored “ideologically incorrect” dissidents.

There were similar agencies throughout the Eastern bloc, the Stasi in the former GDR and the Securitate in Ceausescu's Romania being just two examples. However, unlike all other former Communist countries, Bulgaria has resisted, during the last 17 years, opening all its State Security archives. As a consequence, “The Files” – compromising information about former agents and stooges – have become a way to control the country's establishment and blackmail political opponents. In fact, the unopened files have in many ways predetermined the delayed reforms.

After three unsuccessful attempts since 1990, parliament has passed a new law allowing an independent commission to handle archives from all DS departments. The commission is entitled to disclose the identities of the former regime's agents. Among the names concerned – embracing politics, economics, the judiciary and the media – are several public figures.

The activities of State Security were all-pervasive. The following memo illustrates the strict surveillance citizens were subject to under Communism. Written in the Sixth Department of the DS, otherwise known as the political police, it encompasses the period from 1970 to 1972: “The DS used agents and carried out operations to reveal and neutralise subversive activities among the Bulgarian artistic and academic intelligentsia: about 9,500 people in the art unions and culture institutions; 5,300 people in television, radio and other propaganda agencies; 6,700 people in the Bulgarian Academy of Sciences and its branches; and 4,250 people in the health care system.”

Under Communism, the entire intelligentsia was censored. The DS collected information on every writer, artist, actor, scientist, doctor, engineer or journalist whose opinions deviated from the party line. In fact, Bulgaria resembled the totalitarian state of 1984 long before that year.

The process started in 1954 when the Kremlin appointed Todor Zhivkov as leader of the Bulgarian Communist Party (BKP). Zhivkov gave the DS unlimited powers to spy, eavesdrop and conduct searches without a legal warrant. These prerogatives, underpinning his 35- year rule, involved the accumulation of voluminous files.

These were compiled by different DS departments. All “political unreliables” were carefully assessed to decide an appropriate level of surveillance. The “operational observation” files dealt with people (called simply “objects”) who carried out “hostile” activities against the Communist system. All émigrés automatically became “objects”. An operative – a full-time employee of the DS – controlled the bugging and tailing of such people and there were also a number of “agents” (unofficial informers) depending on the potential danger posed by an object. 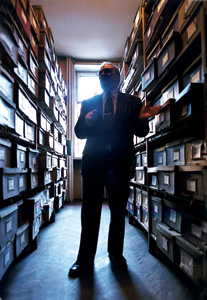 Friends and relatives of people regarded as “dangerous” also became objects of operational observation. This group included hundreds of thousands of Bulgarians either linked to the pre-War democratic establishment or those who had in some way resisted Communism. Relatively less serious was the “operational check” on those suspected of disapproving of the established system.

Each object was given a descriptive nickname. Dissident writer Georgi Markov, for example, assassinated by the DS in London in 1978, was known as “Tramp” because he travelled widely and sometimes chaotically after fleeing Bulgaria. Satirist Radoy Ralin, perhaps the greatest dissident in Bulgaria, was codenamed “Goat,” for his distinctive beard. The nickname ascribed to philosopher Zhelyu Zhelev, who would later become the country's first democratically elected president, was not so inventive. To the secret services he was simply “Philosopher”. However, a more imaginative term described the exiled royal family, including former monarch (and later prime minister) Simeon Saxe- Coburg. Their file was entitled “Parasites”.

The agents, however, were given real names as pseudonyms. Unlike the descriptive nicknames for the objects they spied on, those had no special meaning. Journalist Vladimir Kostov, for example, had worked for the DS as “Krastev”. His escape to Paris in 1977 turned him into an object that had to be neutralised, so Krastev became “Judas”. We now know several more informers' nicknames: Movement for Rights and Freedoms leader Ahmed Dogan was “Sava,” President Georgi Parvanov was “Gotse” and European MP Evgeni Kirilov from the Bulgarian Socialist Party was “Manchev”.

Many files will never be made known because they no longer exist. At the beginning of 1990 the BKP ran a secret operation to destroy compromising material. According to Interior Ministry information, about 40 percent of key data disappeared at that time. Material from the 1985-1989 period never even made it to the archives. It was destroyed in the respective departments.

However, the DS has a much larger legacy. A substantial part of it is the so-called office archives, which contain memos, reports, analyses, information sheets, plans and various documents about the secret service. These papers, almost intact, can shed light on innumerable DS activities – including information about an agent whose file has been destroyed.

Partial research of the office archives has revealed unknown facts about the activities of the resistance movement known as Goryani. It existed until 1952 and was the longest-standing armed opposition to the Communists in the Eastern bloc. They also keep proof of killings in labour camps near Lovech and Skravena, which functioned between 1959 and 1962, long after the Soviet gulags were closed. The office archives hold information about the kidnapping of Bulgarian émigré Boris Arsov from Århus, Denmark, in 1974, and his subsequent murder in a Pazardzhik prison. Evidence linking the DS to Georgi Markov's assassination and the forcible name changing of Bulgaria's Turkish population in 1985 can also be found in these vaults.

Famous dissidents were not the only people subjected to state monitoring. Thousands of ordinary Bulgarians also felt the long arm of the DS. Even those with BKP membership were not exempt. Some were barred from higher education or expelled from university. Others lost their jobs on account of informers' reports. The Passport Department of the People's Militia still keeps 800,000 rejection records relating to foreign travel applications. The DS also monitored cultural life, including the printing of books. Poet Kostantin Pavlov, for example, was only allowed to publish a single volume of verse in his 30 years of writings.

But the heirs to the DS continue to store the most valuable information. It will be accessible only at the end of August, when the independent commission examines it. Importantly, we may never learn all the contents. Different secret services controlled the archives at a time when public accountability was as realistic an option as a public demonstration against Todor Zhivkov. History shows that those who control information have little compunction in abusing their powers.

There was talk of opening the DS archives as early as 1990. But the parliamentary commission, headed by BKP MP Georgi Tambuev, never even wrote a report. Seven years later the Access to the Documents of the Former DS Act was passed. A commission from members of the special services, headed by then Interior Minister Bogomil Bonev, announced the names of 23 MPs. The third attempt was in 2001, when other agents among MPs and government ministers in office after 1989 were revealed. A year later, however, the Simeon II National Movement (NDSV), later renamed the National Movement for Stability and Progress; the Movement for Rights and Freedoms (DPS); and the Bulgarian Socialist Party (BSP) repealed the law. At the very end of 2006, just ahead of Bulgaria's accession to the EU, the same parties passed another law. In the spring of 2007 a new commission was elected and it revealed some names of agents among politicians, judges, diplomats, journalists, media owners and public figures in banking and business.

WHERE IS THE INFORMATION?

But some of the files have been sifted, partially destroyed or altered a number of times over the years. The question of the accuracy of the information has never been broached publicly.

Sadly for Bulgaria, Big Brother was, and in some ways still is, no Orwellian fantasy.