EU BOOST TO GREENS IN BULGARIA AND ROMANIA

by Albena Shkodrova in Sofia and Marian Chiriac in Bucharest, BIRN; photography by BTA
Rate this item
(0 votes)

Environmentalists have become serious opponents to business interests over the European Natura 2000 Programme, leaving local governments helpless in the crossfire

Gathering little public support, ignored, and often under pressure, environmentalists in Bulgaria and Romania had very limited opportunities for influencing their countries' decisionmaking before 2007. But EU membership changed everything, and did it overnight.

The outcome of a bitter fight over the EU's nature preservation programme, Natura 2000, may emerge as the first proof of the new balance of power.

Last month Bulgarian ecologists marked an important point in their battle with developers, as an independent body of experts – the National Biodiversity Council – rejected a government plan to exclude 29 important nature reserves from the protection of the programme. Out of the 29 zones that were reviewed, 27 were found important enough to become part of the Natura 2000 sites. Ministers were hesitant to list all of Bulgaria's nature reserves as protected sites as such a decision – officials have admitted – would block numerous plans for construction work and urban development, and might provoke massive protests from entrepreneurs and local government.

But the Council of Ministers had to accept the National Biodiversity Council's conclusions – it had no way around it. The EU requires that the only criteria applied to this decision are the scientific evaluations of each area's environmental value.

To ensure this stipulation is observed, the European Commission insists that all countries' lists receive the approval of the biogeographic seminars – Europe's forums of environmental experts. This gives a clear signal that in Bulgaria, and also in Romania, which at the moment is undergoing similar problems with Natura 2000, the environmentalists' position has substantially changed for the better.

Organisations protecting nature, green movements and parties only started to emerge in these two former Communist countries in the late 1980s and early 1990s. For over 15 years, they were hardly visible on the political landscape, and had no broad public support. Although local laws were gradually giving them the means to infl uence decisionmaking, little of that was put into practice. In Bulgaria environmentalist organisations only managed to amend decisions occasionally, rather than as a rule. “We were able to influence approximately one in 10 specific decisions relating to ecological issues, and had no chance to infl uence strategies,” explains Petko Kovachev, head of the Information and Training Centre for Ecology.

The situation was even worse in Romania. The first victory of environmentalists there only came in December 2006, when local NGOs, with the Romanian branch of Greenpeace among them, succeeded in halting the construction of the controversial Highway 66, thereby saving the pristine nature reserves of Retezat Park and Domogled Park. Unwilling to cooperate with green movements and organisations because of various economic pressures, the Bulgarian and Romanian governments were postponing any changes to their usual practices until the last possible moment. They even managed to delay their commitments under Natura 2000: neither Bucharest nor Sofia submitted their final lists of protected areas on time – by 31 December 2006.

But now that Bulgaria and Romania have become EU members, their governments must put an end to their practices of ignoring environmental organisations, and will have to involve them in the decisionmaking process instead. The main reason lies in the local environmentalists' newly acquired powers at European level. Having signifi cant weight before the European Commission, their arguments can no longer be brushed aside at home.

Participating in the biogeographic seminars, and having the right to request EU investigations into specific issues where they see violations of EU laws, Bulgarian and Romanian environmentalists have now gained the kind of influence they never enjoyed before. 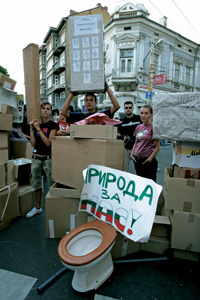 “One of the examples is the problem with the Gorge of Kresna, one of the zones already listed under Natura 2000,” Petko Kovachev said. Government plans to build a highway through this protected area depend on the EU's Cohesion Funds. But to access them, the project needs to prove it is not a threat to the gorge.

“The last two governments tried to ignore our opinion at any cost, but now they will have to take it into account, or they are not going to receive any money,” Petko Kovachev said, adding that this is just one of the many recent examples of the changing conditions.

While the government still seems to treat environmentalists as a threat or an irritant at times, it is also asking for their opinions more and more, according to the conclusions of the international green organisation, WWF, in its report for 2006. It makes the point that while NGOs tend to be neglected by the Bulgarian state, and the information flow to them is slow and scarce, a number of government programmes are now being developed with the participation of environmentalists.

“If any changes come, it will be due to EU influence and pressure,” says Andrey Kovachev of the Balkani Wildlife Society. He says the majority of state institutions are still unwilling to communicate, and only a handful of government bodies set an example by their openness. Yet change is perceptible even at the Bulgarian Ministry of Environment and Waters, which used to be viewed as showing little interest in genuine contacts with green organisations.

“Following one of the latest decisions of Minister Dzhevdet Chakarov in August, representatives of these organisations have started sitting as full members on various committees, evaluating the environmental impact of investment projects along the Black Sea coast and at other ecologically important places,” said the ministry's spokeswoman, Vanya Ivanova. However, she insisted that the initiative for this had come from Chakarov himself, and not as a result of any pressure from the EU.

Romania seems to be moving slowly in the same direction. Its ecoorganisations are fewer in number, and enjoy less public support. Nevertheless they were involved in the preparation of Natura 2000 zones for Romania.

“Romania started to identify and evaluate the sites to be included in the Natura 2000 programme too late. Fortunately, the cooperation between government and local NGOs was good enough, as long as officials took into consideration all our proposals and ideas,” says Emil Burdusel, president of the UNESCO-ProNature ecological NGO. 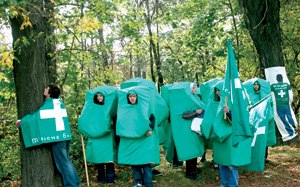 As a result, about 12 percent of Romania's territory was proposed as Nature 2000 sites, starting with most of the alpine zones from the Carpathian Mountains and ending with part of the Black Sea shore and the entire Danube Delta. Burdusel's organisation is part of the Romanian Coalition for Natura 2000, which comprises some 50 local NGOs. It was the public desire to protect nature from overdevelopment and business interests that brought them together for the first time ever.

Similarly, in Bulgaria the EU programme has helped consolidate the environmental movement, whose various groups previously worked chiefly in their own specific areas and only came together occasionally for individual campaigns.

Another positive development, expected by the green organisations, is that Brussels will force the new member states to develop long-term policies.

“The government will have to build its own strategies, and develop them in compliance with the EU's common line,” Petko Kovachev said. “This will put an end to acting upon a whim on each occasion.” These trends will certainly not put an end to the battle for nature protection in Bulgaria and Romania. Just the opposite, they only mark the beginning of a more fierce stage in it.

In Bulgaria, the environmentalists' latest victory means that 28 percent of the country's territory is protected. Only one more dispute for another 44 zones remains, and if decided in the same way, it will expand the protected area to 35 percent – a prospect that has already triggered protests not only among industrialists, but also among the population in many regions, who prefer to see their area grow wealthier, even at the expense of harming the countryside.

The mood is similar in Romania. “Certainly, it is positive that local NGOs have had a say in the process of designating special areas in Natura 2000, but many problems have yet to come, and they are related to lack of money, lack of information, the specific interests of some investors or even people living in those areas,” Burdusel said.

The card the environmentalists have up their sleeve against business and private interests is their power to bring down punishment through the EU. Bulgarian NGOs have already launched proceedings seeking the imposition of fines on local governments that have failed to comply with Natura 2000 commitments.

“If the government does not act responsibly, does not submit a full list of protected areas, or allows some of them to be damaged, Bulgaria may face the most rapid punishment in the history of the EU,” Andrey Kovachev warns.

“Environmental movements in Romania are still at the beginning of the road. But I am optimistic and hope their importance will rise significantly. Hopefully, Romania will not become a heavily industrialised country and we will be able to preserve its numerous natural beauties,” says Ana Maria Stoian of the Romania Fara Cianuri environmentalist organisation.