by Milena Hristova; photography by BTA
Rate this item
(0 votes)

What invaders failed to accomplish through the centuries, the Bulgarian Army managed in a day

”How are you doing in Sofia? Boombastic, thanks for asking!”

This quip has been doing the rounds since a series of powerful blasts at an ammo storage rocked the capital and turned the state upside down. Let's refresh our memories of that 3 July morning when two million Sofianites and citizens from the surrounding areas had a truly rude awakening. The alarm clock was set near the village of Chelopechene, on the eastern edge of the capital, and had nearly 1,500 tons of ageing artillery shells, depth charges, grenades and other explosives attached to it.

Even before the dust settled, the truth had become crystal clear. The blast had blown any remnants of trust in the government of a country claiming to be a proud and diligent NATO member. Not that anyone ever suspected otherwise, but the embarrassing impotence that officials showed in coping with the emergency was something even Bulgaria's biggest challengers couldn't dream up. In a joke-worthy display, the defence minister appeared as confused as a teenager on his first date. President Parvanov, very eloquent when it comes to rattling off statistics from charity campaigns, kept silent. The mayor of Sofia, Boyko Borisov, was the first to roll up his sleeves and fly to the rescue of the people just 10 minutes after the first blast. Oh, and we learnt a valuable lesson – we should post a “wanted” announcement for Natural Disasters Minister Emel Etem next time an emergency hits. 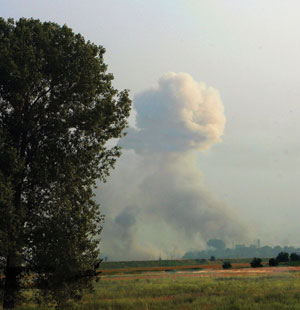 This opinion wasn't shared by the upbeat head of the government, Socialist leader Sergey Stanishev, who once again said it all boiled down to poor communication with the people. “The officials and the institutions in charge had done a pretty good job, you see,” the prime minister said – forgetting that these same officials couldn't make head nor tail of the situation for about an hour.

Now army experts will have a tough time justifying the lack of care in proper storage of the Communist-era antiquated, useless and dangerous ammunitions and the delay in their scheduled disposal. Over the last few years the Defence Ministry and the Bulgarian Army General Staff gave no indications that the delay was an issue. It was thanks to the disaster that it was made known Bulgaria had several similar depots across the country, storing large quantities of useless munitions left over since its military switched from Warsaw Pact to NATO specifications.

The reduction in the army troops actually meant that the country was stocking up on dangerous ammunition as if it was rice or wheat. The official reason for the delay in disposal? Lack of funds, as usual.

Meanwhile, Bulgaria's army ingeniously discovered how to make alignment with NATO lucrative in more than one way. The Chelopechene ammunition depository was set up in 1959 and is one of the oldest of its kind – endearingly dubbed “the small workshop” by Bulgarian Army General Staff. The chain reaction that the blasts set off unveiled a disturbing discovery – the abandoned and wretched ammunition depots are geese that lay golden eggs for insiders, who either pilfer or semi-officially sell ammunitions to companies for metal extraction. 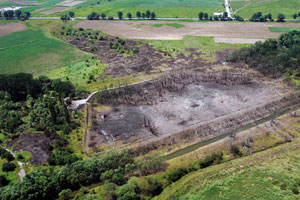 Is it any wonder nobody is ruling out deliberate action in the blasts? Could it be a jammy way to cover up losses?

If we zoom out and put the issue in a broader perspective, the ironic fades as quickly as the wide range of pressing questions loom large. These questions have a lot to do with the fireworks that accompanied Bulgaria's entry into NATO, the tears in the eyes of then Foreign Minister Solomon Pasi, and the five years of army experts' infertile efforts in producing a workable plan to empty numerous arms depots sprawled across Bulgaria.

NATO top brass would hardly be happy with Bulgaria's mounting list of misdeeds since it joined in 2004. Its membership was expected to bring credibility, responsibilities and serious reform measures to upgrade its military to NATO standards, as well as responsibilities, like participation in NATO-led peacekeeping missions in Afghanistan and Iraq.

Bulgaria has had a bumpy ride ever since. For starters, it was a public secret that the old Communist apparatchiks and State Security stooges were still around in this former Warsaw Pact country. After the expansion, military attachés from the Bulgarian delegation did not receive access to a certain level of intelligence material. To top it all off and amidst allegations that Bulgaria is Russia's Trojan horse in the EU, the country was blamed for sharing all the information inside NATO straight with Moscow. 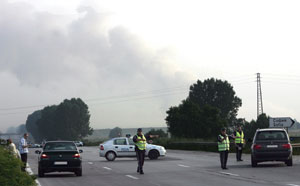 “Who needs a government that leaves you in the lurch when the going gets tough?” Sofia Mayor Borisov – seen as Bulgaria's next prime minister – asked rhetorically, banking on his approach to win over wavering voters.

True, the blast threw the work of the parliament and government into mass confusion. It was only because of the scary prospect of more grumpy Brussels officials coming to Sofia that we saw two resignations tabled – by Rumen Tsokov, deputy chief of the Army General Staff, and Miroslav Toshev, head of the local army unit.

Isn't it indicative that nearly 20 years after the fall of the Communist regime, Bulgarians still need a slap or an emergency to make some – albeit patchy – progress?

One thing is certain – when disaster strikes, forget about the Natural Disasters Ministry. Do not be fooled by its name, because as its head Emel Etem eloquently explained it is the law that stops her from playing a much more active role in such emergencies. Or maybe it's her doubled budget that threw a spanner in the works!

Business interests are believed to stand behind the series of blasts at Chelopechene arms dump, according to military prosecutors. The blasts allegedly aimed to cover up shady deals resulting in 200 tonnes of arms ammunitions going missing or speed up the privatisation of the terrain. Days after the blast, the Defence Ministry said it would put the army unit at Chelopechene up for sale, turning private about 50 acres of its terrain. The government decided to shut 12 arms disposal depots, keeping only four depots to store obsolete ammunitions.

IN GOD THE GOVERNMENT TRUST

“God save Bulgaria from its officials!” exclaimed a local journalist after the institutions left the good people of Sofia wondering for an hour whether it was terrorists – or maybe aliens – attacking.

On the same day and in a totally unrelated development, three supposedly miracle-working Orthodox icons representing the Virgin Mary were brought together from the Rila, Bachkovski and Troyan monasteries to the pilgrims in Sofia. Some hacks surmised they had prevented a grander disaster from happening.

People of more down-to-earth inclinations, however, still thanked God, saying Bulgaria's politicians had obviously rendered everything into his hands.