WHAT'S IN A HORO?

Village dance gets put to political use to boost 'patriotism'

In August, at approximately the same time when the Trade Register went dead and commercial transactions, including property sales, ground to a standstill for about a week, a group of folk dance enthusiasts identifying themselves as "patriots" made an attempt to enter the Guinness Book of Records. They climbed up the Rila Mountain Range and danced what they thought would go down in history as the "longest highland Horo in the world." Some of them got so excited that they stepped into one of the Seven Rila Lakes and danced in the water. A snapshot of the event with unclear authorship was quick to spread on social media, prompting the usual flurry of love-hate statements. Predictably, the supporters felt proud that something so quintessentially Bulgarian would perhaps be inscribed in the all-important world encyclopaedia of trivia. The critics, for their part, insisted the Horo dancers had waded into a protected lake, seriously jeopardising its fragile ecology. Both parties traded accusations and counteraccusations. Some implied that the Horo was an innocuous yet powerful antidote to this nation's "cultural identity" being "threatened" by a liberal and multicultural EU. Others countered that the Horo, like the square dance in some parts of the United States, was meant to assert as "official" just one part of the culture, depreciating and denigrating non-mainstream customs and traditions. The debate receded only when an insurance company, where as many as 190,000 Bulgarians had their cars signed up, went bust.

Indeed, what is in a Horo? Is it just the dance and the music, odd as it may be to Western ears, or does this peasant rite mean more than the colourful human circle that meets the eye?

One of the first things that a visitor to this country will notice, either at a traditional restaurant with live entertainment or at one of the  village festivals that have mushroomed in recent years, is the Horo, Bulgaria's telltale circle dance. It is usually performed by both young and old, sometimes dressed up in 19th century folk costumes. Increasingly, in recent years a Bulgarian flag gets waved by the leader of the Horo. In the past, the flag used to be a white kerchief. 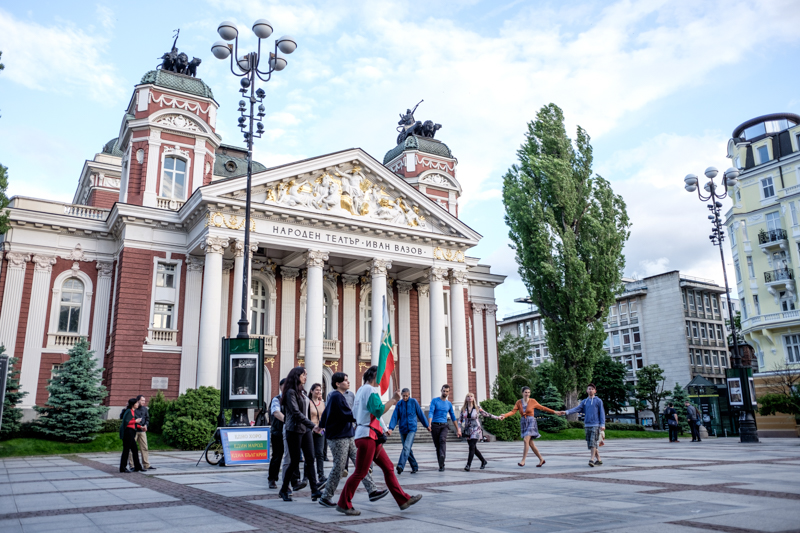 Central Sofia has not seen a massive Horo since the fall of Communism, when peasant traditions were actively encouraged by the state. The sign in the lower left corner reads:
"One Horo, One Nation, One Bulgaria" © Anthony Georgieff

Of course, there is nothing wrong with the Horo or with men wearing coarse baggy trousers, like there is nothing wrong with Germans wearing Lederhosen or Dirndl, but it might be interesting to consider that what was essentially a 19th century village tradition gets unscrupulously used by the extreme nationalist parties currently in government to boost their version of "patriotism." Significantly, they use a dance to impose what they consider to be this nation's cultural identity onto modern Bulgarians many of who can hardly move their feet in the intricate Horo steps.

The origins of the Horo are unclear, but like most other things in the Balkans the dance is probably an amalgamation of rites and customs common to Turks, Greeks, Armenians, Bulgars and all others who happened to pass through. The Bulgarian version is in fact quite complex to learn, especially to outsiders unfamiliar with its uneven beats.

To start off with, there are several dozen different variants of the Horo. Historically, they originated in different parts of the Bulgarian lands. The region around Sofia, for example, has its Shopska Rachenitsa, its Kopanitsa, its Petrunino Horo and several others. In Dobrudzha, in the northeast, both the music and the dance are quite different. In the north there is the Daychovo Horo and the Dunavsko Horo, the latter being the standard dance everyone gets involved in when the clock strikes midnight on New Year's. Tunes, melodies, beats, rhythms and steps are very different in the Rhodope and in Macedonia.

The music the Horo gets danced to is as varied. Sometimes it is slow and heavy. Other times it is joyous and lively. Traditional instruments include drums, bagpipes, flutes and a kind of primitive violin, but clarinets, accordions and even the double bass are also used. 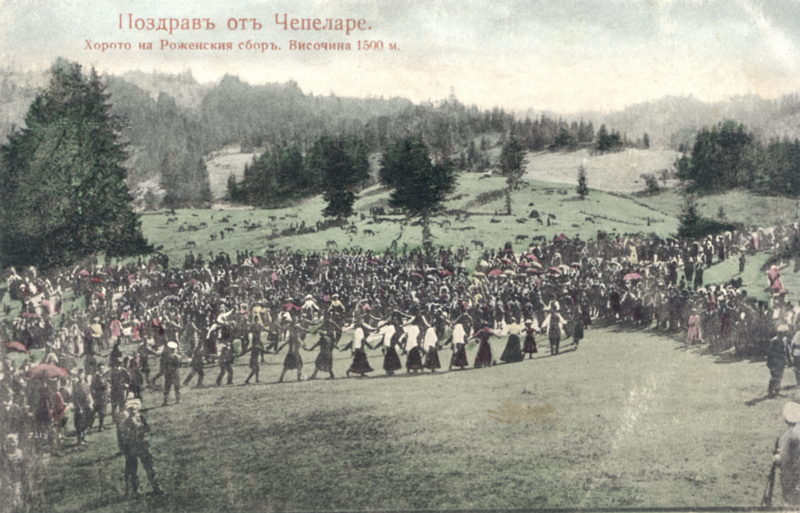 Dancing the Horo at high altitudes in nothing new in Bulgaria. Pictured here is a 1,500-metres-above-sea-level Horo at Chepelare, in the Rhodope, at the beginning of the 20th century

Some basic Horo dances are taught in Bulgarian schools, a rather useful subject in gyms as sooner or later pupils tend to grow up and get married whereupon a wedding Horo will be called for.

The trouble with the current outpour of Horo dancing is that it is used almost exclusively to assert some kind of a largely imaginary identity that belonged mostly to the peasants of the 19th century. While it is true that the majority of 19th century Bulgarians lived in villages and had the unmistakable Weltanschauung of people living in villages, as Bulgaria strove for its independence from the Ottoman Empire a significant number of people chose to modernise themselves. They sent their children to study in Vienna, Paris and London, and the grown-up kids returned home as doctors, lawyers and scientists to build the new Bulgaria. Those were the people who never wore baggy trousers and fur hats. They dressed in suits and wore bow ties. They had flushing toilets and imported architects from  Austro-Hungary and Italy to build Sofia, the new capital. They wrote law books and textbooks. They ran the country in spite of the fierce internal and external troubles. It is thanks to them that Bulgaria slowly started to assume a more European face.

Now, when Bulgaria is finally a formal part of the EU, the peasants are coming back with their baggy trousers, fur hats and the Horo. Whether any of the young Bulgarians who study in Vienna, Paris and London will ever return to their baggy trousers "origins" is doubtful. Yet, the policy of the state, intentionally or not, is to assert this type of "folk culture" as an "antidote" to Western influences. 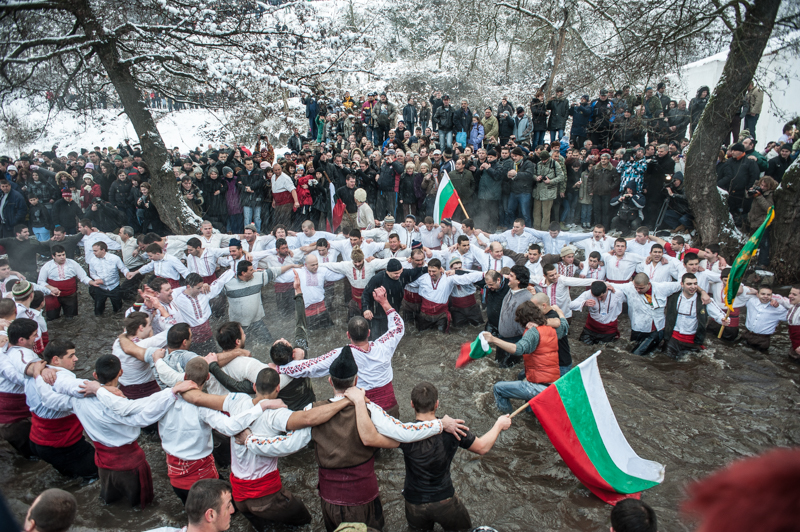 A men-only Horo in the icy waters of the River Tundzha in Kalofer, performed on 6 January, the Orthodox holiday of Epiphany © Anthony Georgieff