THE LONG HANDS OF CORRUPTION

© Ivan Kutuzov
Everyone knows that graft is a way of life in Bulgaria. But can anything be done about it?

During the week in which The New York Times carried its "Mob Muscles Its Way Into Politics in Bulgaria" article, Bulgaria witnessed yet another series of interesting events that most Bulgarians have become used to during the Transition years but that most foreigners in and outside the country still have difficulties to come to terms with.

Pernik's district prosecutor's home door was stolen in broad daylight. At the time of the theft (tempting to call it "burglary"), the prosecutor, Lidiya Manolova, was at a pretrial hearing of an individual accused of mugging an Ataka party leader.

Then, the State Agency for National Security, or DANS, and the police staged a massive raid against organised crime in the southwestern town of Dupnitsa. Local businessmen Plamen Galev and Angel Hristov, collectively known as the "Galevi Brothers" and dubbed by the media the local underworld barons, had disappeared from their homes, their whereabouts reported as "unknown." On the following day the two arrived at the National Intelligence Service in Sofia to inquire why they were being investigated. At a press conference they denied having any prior knowledge of the raid. Hristov, however, did concede that he had "moved his family from the house because he knew that the special operation units would be coming that night."

Later, two corpses turned up in Sofia. One morning the body of forensic expert Professor Hristo Radanov was found hanging on a swing set in a playground. In 2005 a group of policemen in Blagoevgrad beat Angel "Chorata" Dimitrov to death while in custody, following which Radanov publicly stated the police had used excessive force. The same evening, at the Boyana residence of the DPS, or Movement for Rights and Freedoms, the Ahmed Dogan chief of office, Ahmed Emin, was found shot in the head. Both cases are being officially investigated as suicides.

Then the Sega newspaper reported that the European Commission had permanently withdrawn 560 million euros of funds for Bulgaria under the PHARE programme earmarked for international cooperation and road construction. The funding had been suspended over the summer due to wrongdoing and conflicts of interests in the Road Infrastructure Fund. During that period a European Commission report accused Bulgaria of failing to make clear progress in its fight against organised crime and corruption.

All of this is happening against a backdrop of unprecedented investment in Bulgaria's legal system. "According to a World Bank report this summer on the judiciary's resources in Bulgaria, public spending on the country's justice system rose by 223 percent between 2001 and 2007," says Ivanka Ivanova of the Open Society Institute, a liberal think tank.

"The average salary in the sector increased by 169 percent, the number of judges by 15 percent, and 513 new prosecutor positions were created between 2004 and 2006. In October, the Council of Europe's Commission for the Efficiency of Justice said Bulgaria was spending 0.26 percent of its per capita GDP on courts and 0.12 percent on prosecutor's offices, outdoing countries such as Switzerland, the UK and the Czech Republic," Ivanova says.

Contrary to Marxist theory, quantitative accumulation does not always lead to qualitative changes, and corruption and organised crime remain probably the single biggest problem in Bulgaria. In October, a research on private businesses by the Governance Monitoring Association, a public-sector policy NGO, showed that 80 percent of them have run up against corruption and that 60 percent of them consider it "a widespread practice." In some cases bribes can amount to as much as 20 percent of a contract's value. According to the Centre for the Study of Democracy, a public policy institute, in 2007 corruption in awarding public procurement orders cost the country 1.6 billion leva.

Looking for a scapegoat, the government has discreetly pointed to the judicial system. "One possible answer is that the courts and the prosecutors are doing their jobs ineffectively – just like the entire state administration. No matter how much funding they have, they still won't be able to do their job," Ivanova says. She believes, however, that the problem lies elsewhere. "Even if we assumed that we live in a world in which the courts and prosecutors work perfectly, it would still be doubtful if they would be able to limit corruption and organised crime," Ivanova adds.

Why? "Neither corruption nor organised crime is a standard legal concept. There's no such thing in the Penal Code. Organised crime and corruption are far more complicated than standard crimes, which makes the penal policy resources insufficient to keep them in check," Ivanova explains. The absence of a clear legal definition oforganised crime is not an entirely Bulgarian oversight. "The Bulgarian Penal Code is an almost word-for-word reproduction of the Palermo Convention, the main international legal instrument in that area," says Ivanova.

"If you want to put someone on trial, you can accuse them either of 'participation in an organised crime group' or of 'committing serious premeditated crimes under the terms of a prior agreement.' And both are nearly impossible to prove in court. It is extremely difficult to establish a single group of individuals' intent to jointly commit multiple crimes. Besides, the legal definition is so imprecise that the term 'organised criminal group' can apply to a group of 2+1 common criminals who carry out a planned robbery or a series of robberies. This explains why every year the Interior Ministry announces that it has 'uncovered' or 'neutralised' 200 or 300 criminal groups. But that doesn't change the big picture of organised crime and corruption in the country," Ivanova points out.

"Actual organised crime has two very important characteristics: It owns and operates a fully legal business, and it develops and implements strategies to safeguard its invulnerability to criminal investigation. It receives access to information about the work of law enforcement agencies or directly draws police and justice system employees into criminal structures," says Ivanova.

All of this makes the justice system and the police unable to deal with the problem on their own. They need administrative support from the government. "Political involvement in administrative appointments must be reduced. A body of professionals must be set up within the administration, and political parties need to have an internal mechanism for avoiding potentially unethical ties to business," notes Ivanova.

The same holds for corruption. "In the Penal Code there is a crime called 'bribery,' but this doesn't reflect the complex system of patronage under which political parties take over top administrative positions and divert state resources toward private companies which, in turn, sponsor the parties' political activities. Even putting a few individuals in jail for bribery won't solve this problem," Ivanova says.

For example, in October some MPs alerted the chief prosecutor that three companies which OLAF, EU's anti-fraud office, was investigating for misuse of SAPARD funds had sponsored the Bulgarian Socialist Party's, or BSP's, election campaign in 2005. Later the media discovered that employees of one of the businessmen under investigation, Mario Nikolov – a sponsor also of President Parvanov's re-election campaign – received bonuses of 10,000 leva shortly before the election. Soon thereafter they deposited the same amounts into the BSP's bank accounts. The case against Mario Nikolov is only now reaching the court of first instance. 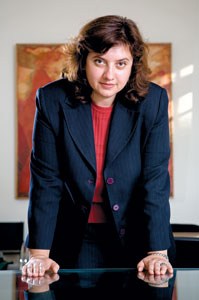 Prime Minister Sergey Stanishev promised full transparency on all campaign sponsors – and fought back against the accusations. He announced that GERB, founded by Sofia Mayor Boyko Borisov, was financed by construction firms that work on city property.

Is there any way out of this mess? "There is a whole series of measures that the government is doing its best not to implement," says Ivanova. "It has to guarantee transparency in the distribution of public funds, to limit the possibilities for skirting the Public Procurement Act and to introduce specialised investigations into violations of this law." At the moment, the law is regularly violated using the following well-oiled system: "When a firm wins a concession, the contract's terms are renegotiated, and the funds for its financing are increased."

Responsibility to honour contracts could be a very powerful weapon in the fight against misappropriation of funds – but the government seems blind to this. "The full texts of public procurement contracts are rarely accessible. However, it's unlikely that they contain working clauses concerning nonfulfilment and payment of damages. There are no publicly known cases of a contract being cancelled due to non-fulfilment or cases in which the state has collected damages from such contracts," says Ivanova. Currently the only way of punishing a noncompliant party to a public procurement contract is to bring them to court and to prove that they committed criminal fraud – a task usually doomed to failure.

The government doesn't have to reinvent the wheel to solve the problem. "In the United States if a company fails to fulfil its contractual obligations, it must pay the government two or three dollars for every dollar it has spent illegally. This happens without the involvement of the criminal courts and without the necessity to prove the intent to commit a crime," says Ivanova.

Another way to prevent such abuse is to bar any firm that has already violated such a contract – without necessarily a court ruling – from accessing public concessions. "The Bulgarian government, however, remains very undecided on this measure as well," notes Ivanova. "In May the European Commission demanded that Bulgaria provide a 'blacklist' of all the companies for which it has evidence of abuse of public funds. For a long time the government refused to draw it up, arguing that it could include only companies that had been convicted. However, there are no such convictions – and again the courts served as an excuse. In the end the government gave Brussels a list of 50 minor companies suspected of abuses," says Ivanova.

"The courts and the prosecutors alone cannot deal with organised crime and corruption. By constantly turning attention towards them, the government simply shifts the political responsibility," Ivanova explains. "At the same time the government has at its disposal many other means of solving the problem. Transparent governance, rational selection and management of employees within the state administration, financial policies, and party discipline could be much more effective in limiting corruption and organised crime. For this reason political pressure to continue reforms – both from Brussels and from Bulgarian public opinion – must be focused on the government and parliament, not only on the judicial system."

So far, however, this remains wishful thinking as any expat – and Bulgarian – having had to deal with a state or city council institution knows painfully well.