Will the economic turmoil in Bulgaria match the crises in the United States and Europe?

A child building a house out of stacks of devalued bills – in 1997 Bulgarian high school students didn't need this textbook illustration of Germany's economic crisis of 1923 to understand what hyperinflation means. They had just experienced it firsthand a few months earlier, when the exchange rate for the US dollar reached 3,000 leva. Prices jumped daily. Desperate mothers learned how to make soup out of yesterday's breadcrumbs. Thousands of families discovered soy as a meat substitute.

Also lessons about the Great Depression came as no shocks to Bulgarian school kids: They had already seen banks collapsing and people losing the savings of their lives. Most small entrepreneurs who had taken out loans went bankrupt due to interest rates which soared so high that they became more expensive than the principal.

The 1996–1997 economic crisis toppled the Bulgarian Socialist Party, or BSP, from power. Bulgaria introduced a currency board regime that pegged the lev to the German mark and later to the euro – a move that reined in inflation. Bulgaria joined NATO and the EU, and foreigners began arriving – either as tourists or to buy a cheap second home. Many Bulgarians also took out mortgages to buy housing.

Eleven years later Bulgarians are again facing a crisis – a global one. According to Georgi Angelov, senior economic expert with the Open Society Institute, a liberal think tank, Bulgaria won't suffer from the credit crunch as much as some other countries.

Is there an economic crisis in Bulgaria?

Not yet. At least not in terms of the financial system, the economic activity and unemployment. The financial system has not suffered as much as banks in the United States and the EU, because Bulgarian banks did not invest in the same kind of securities as their Western counterparts. Instead, they stuck to more traditional banking practices.

For its part, the economy has sustained no heavy blows yet, as it takes time for the crisis to reach peripheral countries such as Bulgaria.

What will the crtitical indicators in Bulgaria be?

The prevailing opinion is that Bulgaria will suffer primarily in foreign trade and foreign investment. In both cases, we're talking about the country's connection with the EU – Bulgaria trades mainly with fellow EU member states, and foreign direct investments come primarily from there. It is through these two channels that the effects of the crisis will come to Bulgaria.

But unlike in the United States and Western Europe, in Bulgaria the financial crisis will not begin in the banking sector and then spread across the economy. Here the interconnectedness with the EU will play the decisive role. It is highly unlikely that the Bulgarian banking sector will suffer problems that go anywhere near those that currently plague Western European banking.

Which sectors of the economy will be most heavily affected?

A few years ago there was a boom of interest from English and Irish investors who sought to buy real estate in Bulgaria. As a consequence, these investments helped boost the construction sector. Now when English and Irish buyers can't get loans from their banks, they have stopped buying properties in Bulgaria and as a result we've seen the opposite process – a slump in the pace of construction. Of course, the construction industry has suffered also from EU's freezing of funds for Bulgaria. This of course has nothing to do with the global economic crisis, but is rather connected with Bulgaria's poorly reformed institutions.

Will there be bank collapses?

It's highly unlikely that Bulgarian banks will go under. The Bulgarian banking system is quite traditional – it didn't invest in risky financial instruments and it has large capital reserves and profits, as well as a high level of liquidity. In many Western countries whose banks have been afflicted by toxic loans, the banks maintained a tier-one capital ratio of 3 to 4 percent. In Bulgaria the average rate is 11 percent.

At the moment, which is better: to have money stashed in a bank deposit or to owe money to a bank?

Some experts argue that during a crisis it's better to be a debtor. I disagree. In times of financial unrest, you can lose your job, and that's why it's better to have something put aside.

Is there any truth in claims that Bulgaria will remain an "island of stability" thanks to the large amount of criminal capital that has been invested in the economy?

I don't think there's that much criminal capital in Bulgaria's economy. Over the past three years, most capital has come from Western Europe. The problem is that while Western European banks and economies are struggling, it becomes much more difficult, and unlikely, for Western European companies to invest in Bulgaria.

When we Bulgarians hear the term "economic crisis," we don't think of the Great Depression or the recession of the 1970s, since then we were relatively isolated from these events. For us "economic crisis" brings back memories of the winters of 1990–1991 and 1996–1997. 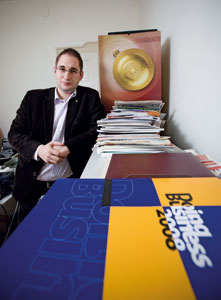 What is the likelihood of history repeating itself with high unemployment, energy shortages, lack of staple goods and high inflation?

Bulgaria's great economic crisis took place relatively recently – and that's one of the reasons the Bulgarian economy is relatively better prepared for the current global crisis.

For many Bulgarian politicians – especially the ruling Bulgarian Socialist Party, or BSP – the crisis of 1997 is still a very bad memory. Then they had an absolute majority in parliament and controlled the government, yet they fell from power within a few months. This was a very painful experience which has made them careful not to repeat the same mistakes in macroeconomic terms.

Other countries that have not recently weathered such serious crises didn't even consider such risks when planning their economic policies. This has made them much more vulnerable now.

What steps should the government take to limit the crisis' impact?

Its basic efforts should be centred on exports and the flow of foreign capital. The Bulgarian Government can counter reduced investments by bolstering economic stability and putting greater effort into improving the business environment: bureaucracy needs to be reduced and institutions should be strengthened further. And this includes also the fight against corruption.

Up until now many foreign investors wanted to come to Bulgaria, but Bulgarian bureaucrats put various obstacles before them. The threat of financial crisis is a good reason to end this practice, to get rid of the basic barriers to investment and thus to allow the country to continue attracting capital. This is a difficult approach, but it's feasible. The government needs to turn the threat of a crisis into something that will help the economy, using it as an opportunity to push reforms forward.

Has the government been responding adequately to the global crisis so far?

There's no straight answer to this. In the financial sector, the government immediately adopted all relevant EU policies – guaranteeing deposits, expressing willingness to recapitalise banks if necessary and so forth. This happened despite the fact that the Bulgarian banking sector has not as yet suffered at all. As concerns macroeconomic stability, the government's efforts have been focused primarily on the 2009 state budget. It provides for many buffers and opportunities to counter even worst-case scenarios.

There are also indications that the government will work on improving the business environment. This would truly be a good thing; however, I know that in pre-election times politicians are rarely inclined to make radical changes. Yet this is what's necessary.

It seems to me, however, that there are some underappreciated risks which the government has not addressed adequately. In September it became clear that threats to Bulgaria's economy were increasing and that it was possible for the country's credit rating to be lowered. Two months later, it happened. I'm convinced that if the government had been more active at the first signs of the looming crisis, it could've avoided the lower credit rating. This would've been a truly positive signal to investors.

Is the Currency Board the only thing that's preventing the crisis from spreading?

The Currency Board reduces the risks of the crisis by supporting a fixed exchange rate between the lev and the euro and guarantees full backing of leva-denominated currency reserves. We have seen that other small countries, with floating currency exchange rates and insufficient currency reserves, have been unable to cope with the crisis and have needed IMF help. Another advantage is Bulgaria's strict fiscal policy. Unlike many countries in the EU which had budget deficits even when their economies were flourishing, Bulgaria has a budget surplus. Countries such as Hungary and Argentina have already suffered due to lax fiscal policies. In the third place, the Bulgarian banking system is not very large – unlike those of Iceland or Ireland. Iceland's banking system was 10 times larger than the country's GDP. For that reason, when the banks got in trouble and the government tried to save them, the government itself went bankrupt. The Bulgarian banking system is smaller than the country's GDP, so in Bulgaria an Icelandic scenario would be impossible. The next factor relates to the banks themselves. They have much stronger capital bases, and the reserves held in the central bank are many times higher than the EU average.

Can you explain the fact that developers continue building huge shopping malls, hotels, ski runs, stores and luxury boutiques? Is this a feast in time of plague or just inertia?

The explanation has to take into account the fact that the crisis has still not hit Bulgaria hard; otherwise, there wouldn't be any interest in or financing for many such ventures. In some cases the reasons lie also in the long-term nature of the investment: it does not depend on purchasing power or consumer spending today or even one or two years down the road, but rather is based on expectations over the next 10 or 20 years.

What is the best course of action for the people who have bank savings?

You should always be cautious, but given the current level of risks to the economy, now you should be twice as cautious. Choose your bank carefully or even spread your savings among several banks. It is wise to keep in mind the amount of the government's bank deposit guarantee – in Bulgaria, deposits of up to 50,000 euros are guaranteed. If you have larger deposits, divide them among several banks.

What about those who have mortgages or other loans?

If you have an outstanding loan, you should think long and hard about whether you're prepared for all sorts of scenarios – higher interest rates, family members losing their jobs and so forth. There are certain insurance policies that cover some of these risks – for example, there is insurance for people who lose their jobs and are unable to keep up with their mortgage payments.

Where is the best place to wait out the economic crisis – in the UK or in Bulgaria?


For now, Bulgaria. And if the Bulgarian Government acts wisely, this might be the case in the future too.

When is any economic recovery expected?

When the crisis ends, first in the United States – where the trouble began.