WHO IS BATTE BOYKO?

A saviour or just another savior?

The photographs of ousted Communist dictator Todor Zhivkov surrounded by a crowd of nostalgic Bulgarians in the 1990s and King Simeon returning from exile a few years later look similar in one way. They both show the return of deposed rulers, and behind both Zhivkov and Saxe- Coburg-Gotha, there is the same strong young man with watchful eyes and a fringe of hair on his forehead.

A simple bodyguard? No. This is Bulgaria's current prime minister, Boyko Borisov.

In 1996, he was the archetypal selfmade man from the early years of the post-Communist phase. Born in 1959 in Bankya, he applied for the police academy in Simeonovo in 1977. Because his grandfather was killed after the Communist coup of 9 September 1944 – and the Communists who run life at the time demanded a clean record not just for you but for your extended family as well, he was not admitted to the military faculty. Instead, he was accepted in the firefighters' unit. As was compulsory at the time, Borisov became a member of the Bulgarian Communist Party.

He gradually moved up the ladder. In 1990, he became a "candidate of science" (a degree equal to a PhD), after defending a dissertation entitled The Psychophysical Training of Field Staff, and then left the Interior Ministry. A year later, Dr Borisov established the IPON-1 protection company. At a time when "security" and "insurance" firms practically ruled Bulgaria and competition amongst them was often decided by bullets rather than contracts, it flourished – and won Zhivkov and Simeon II as clients.

It was the former king who opened the door to politics for Borisov. In 2001, Borisov was made chief secretary of the Interior Ministry in Saxe-Coburg's government. In 2005, he won the mayoral election in Sofia. Two years later he would be reelected. In 2006, he founded a political party, the Citizens for European Development of Bulgaria, or GERB, and became its informal leader. In the general election on 5 July this year, GERB won a landslide victory – just a few seats short of an absolute majority in the Bulgarian National Assembly.

The eight-year-long political career of Borisov, known because of his macho aura as Batte Boyko, or Big Brother Boyko, is truly phenomenal.

The new politician seems to be non-partisan (he broke with the Simeon II National Movement) and wins fans and votes with his own charisma alone.

Borisov has the knack of talking to the media and being liked by them, even when he openly mocks and scolds them. Possessing attributes of the Terminator, Batman and Don Vito Corleone combined, the ex-fireman ex-bodyguard simply secretes the message "I'll sort it all out" like a pheromone. Women like him and he has another skill too: he tosses around pithy sayings which are simultaneously funny and true.

Indeed. Going to a football match, which Borisov loves to take part in, requires alliances based on liking or not liking a team. Politics in Bulgaria, as Borisov now exemplifies, has been just that: people tired of seeing the Bulgarian team lose all kinds of matches are now tired of being asked for bribes for even the simplest things. Logically, Borisov's main promise has been to fight corruption. Let's hope the football improves as well.

When God said "Let there be light," Boyko Borisov replied: "Say 'please'!" This is one of the dozens of jokes about BB that have appeared on the Internet

3 December 2006: In the presence of 3,000 delegates Boyko Borisov founded the Citizens for European Development of Bulgaria, or GERB, political party. He is still its informal leader 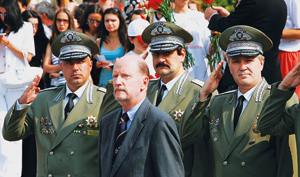 5 July 2004: General Secretary of the Interior Ministry Boyko Borisov (left) and Prime Minister Simeon Saxe-Coburg watching the parade for the 125th Anniversary of the establishment of Bulgarian police. Some time earlier, the prime minister had promoted Borisov to a lieutenant general

2 February 2002: Borisov visiting a cancer clinic for children in Varna, where he received a gift: his own portrait drawn by a little patient. It says "This is my hero"

1 June 2005: Borisov giving out autographs, footballs and T-shirts to the schoolchildren of Brestovitsa, near Plovdiv, as an MP candidate on the NDSV ballot. Although he did get elected, he gave up his seat in parliament

13 September 2006: Borisov realising the dream of thousands of Bulgarian men: he kissed Serbian turbo-folk music star Ceca Velickovic before her concert in Sofia. Velickovic is the widow of Željko "Arkan" Ražnatović, who was indicted for crimes against humanity in Croatia and Bosnia-Herzegovina. He was assassinated in 2000 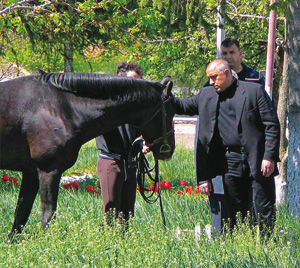 July 2009, to a woman from the local community, before the inauguration of a renovated kindergarten in Pancharevo

"If there is anything to be pleased at, it is that now Ivan Kostov from the Democrats for Free Bulgaria and I have found a common language. The Bulgarian media don't even know it. We had several meetings. The common enemy is clear. I hate the Communists so much that I won't say a word about the right wing."

"I am the fountain and Sergey Dmitrievich (Stanishev) is the crumbling bathhouse over there."

On opening the fountain in front of the bathhouse in Bankya, 8 August 2007

"All this is a parliamentary job and not the president's business. If some day I have the power to decide, three out of the five people in the commission that will control the activities of this agency will be from the opposition. A ruling party can't be controlled by a ruling party because power is the basic source of corruption."

On the proposition that the president appoint the head of the State Agency for National Security, or DANS, of the Council of Ministers

"These are simply chain rings, rings that bind together… They club together, choosing from among their own kind, and thus go together in sets over the years."

On the State Security people in modern politics

"If they are known criminals – throw them into jail! What evidence do we need to look or? And what kind of judges are these – a sissy who graduated last year and already has immunity."

"I have no comment. I have not said it officially and I don't even remember saying it. Even if I did say it, this is my right."

"I don't go to football matches because I swear. I'll have to gag Stoytchkov's mouth so that he uses only gestures."

"I'll never make an alliance with Ataka, but I am pleased with them as they are the only opposition to the political oligarchy in Bulgaria."

July 2006, to the former Socialist interior minister, who was forced to resign over corruption allegations

"We catch them, but they (the courts) let them out."