Interior Ministry Fails to 'Include' Gypsies

Marching youths are chanting racist slogans while edgy riot police with Darth Vader-like helmets block the streets. Armed with spades, poles and other makeshift means of self-protection, worried residents of Gypsy areas are on the alert, anticipating attacks on their property.

Bulgaria is in the seventh year of the Decade of Roma Inclusion, but it took a mere week – the week following the Katunitsa incident – for it to become abundantly clear that the integration of Gypsies has been a failure. The last census recorded the Gypsies at a little more than 325,000 (5 percent of the population) and established that the Gypsy language is the mother tongue of some 320,000 people. Nationalist organisations are convinced that these data have been manipulated downwards.

The Gypsies are the poorest section of the population. According to some sources, around 30 percent of the residents of the ethnically segregated quarters have no health insurance. A recent research conducted by Alexey Pamporov of the Open Society Institute in Sofia showed that in February 2011 the number of Roma households living under the poverty line of 246 leva per capita was twice that of the national average. The median worker's wage after taxes in Bulgaria was 506 leva, but the average wage among the Roma was only 185 leva. Nineteen percent of the Roma households lived without proper sanitation, 49 percent didn't have a bath, 59 percent didn't have hot water at home and 60 percent didn't have a flush toilet. The average Roma lives on 23 sq.m, compared to 37 sq.m for the average Bulgarian.

For the average citizen, however, the Gypsies in Bulgaria are nothing more than pampered "children of democracy" who have nothing but rights – to unemployment benefits, child allowances and free health care; and no obligations. They do not work and pay no taxes, health insurance contributions or electricity bills. When they go abroad they take to prostitution, drug dealing and pickpocketing, contributing to and sustaining a negative image of Bulgarians as a whole.

"Such a situation could have been anticipated," says Alexey Pamporov, a social scientist and researcher at the Institute of Sociology at the Bulgarian Academy of Sciences and at the Open Society Institute, a liberal think tank, in the aftermath of the Katunitsa violence. "The previous government of the so-called Three-Party Coalition had committed itself to providing opportunities for Roma to find jobs, but it seems that the Decade activities have been frozen over the last two years, and I have seen almost no new projects." Pamporov, who is an expert on Roma problems, adds: "It is true that the GERB administration promised to use EU funding to build cheap housing, which would have been a good thing, as the segregated quarters suffer from exceptionally inferior infrastructure." So far, however, no new construction has started.

Until a few months ago the Decade activities had been coordinated by the Labour and Social Policy Ministry, but in March 2011 the initiative was transferred to a new coordinator, Interior Minister Tsvetan Tsvetanov, who is also the chairman of the National Council for Cooperation in Ethnic and Integration Issues. "The Decade has five priorities: education, health care, employment, improvement of residential environment and preservation of the Roma culture. Not one of them has to do with internal security," Pamporov says. "Appointing Mr Tsvetanov to this post means that, overall, the current government regards the Roma as a criminal gang. This is how the Roma inclusion has ended up in police cordons and Roma pitted against Bulgarians."

One of the chief demands of the protesting youths in September was that "Gypsy crime" be dealt with once and for all. It's a demand that is grist to the mill of radical political leaders such as Volen Siderov, and only serves to highlight how dangerous it is to make generalisations.

"It's not a 'Gypsy problem'," Pamporov says. "It's a ghetto problem, a problem of the places that are centres of illiteracy and poverty, a problem of the out-of-control expansion of the segregated neighbourhoods."

The expansion of the Gypsy neighbourhoods in the big cities is a direct consequence of years of political and economic transition and the ongoing economic crisis. During Socialism, the nomadic Gypsies were made to settle in villages, where they were given jobs on cooperative farms. The disintegration of these farms in the early 1990s took away their livelihood, as they did not own land that they could till as small farmers. Thousands of Roma moved to the big cities where they hoped to find employment, but all they found was another problem: they had nowhere to live. Most of them squatted in deserted buildings or on the outskirts of older Gypsy quarters, in which a settled and integrated population was already living. 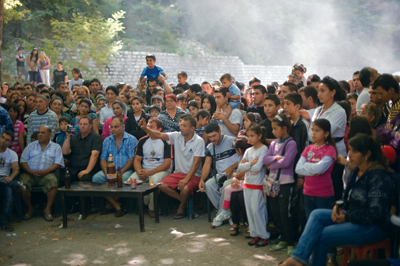 Will Tsvetanov integrate them?

"Take Fakulteta," Pamporov says. This Gypsy neighbourhood in Sofia is notorious as a place of wretchedness, with a high crime rate and an aggressive attitude towards outsiders. "If you go there, you'll see that the poorest Roma, those who live in cardboard-andnylon shacks and whose children run naked in the streets, are the incomers. They live separately and in isolation from the rest of the Roma. Unfortunately, when media crews come to Fakulteta they stop at these people and take pictures and construct news reports about them. But if you go deeper into the neighbourhood, you'll find normal houses with well-tended gardens and tomcats dozing on the window ledges. The neighbourhood is no different from a Bulgarian one; the people are integrated and have jobs."

But the poor incomers – the scavengers who have no clothes and live on the streets – are much more visible than the integrated gypsies. "The widespread impression of the Roma as dirty and jobless people who move about in horse-driven carts was created by direct observation. Everyone is bound to be struck by a man with a cart rifling through a rubbish bin; no one is likely to be impressed by his integrated Roma colleague," Pamporov says.

The most dramatic scenario is in the big cities which, after 1989, became the end points of Bulgaria's internal migration. Regardless of their ethnicity, people from villages and small towns set out to the big cities where, they presumed, jobs would be easier to find. "The Roma became more visible in the big cities, which explains why the largest anti-Gypsy protests after Katunitsa took place in Sofia, Plovdiv, Varna and Burgas," Pamporov says.

He thinks that the first step to resolving this complex and multifaceted problem is for the government to recognise its existence. This would require encouragement as well as coercion. Without differentiating between ethnicities, the state must provide the socially disadvantaged with council homes and increase unemployment benefits – with strings attached, of course . "Yes, the incomers must be provided with council homes, but in exchange for mandatory registration, minimum living area per person, some sort of order. The unemployment benefits must be increased, but the beneficiaries must take part in community labour. In this way, they will keep up their work skills, and the rest of the population won't regard them as a burden."

But there are also cases in which the state, even if it has the opportunity and capability to take action, appears afraid or unwilling to do so.

Pamporov knows of a couple of cases in which underage Gypsy girls have sought help from the Agency for Protection of Children. They want to continue their education but their parents have plans to marry them off. The agency's experts react, but the cases fail to reach court. In one situation, the regional prosecutor refused to open a case, in another the prosecutor did his job but it was the judge who refused to let the case stand.

Both cases were dismissed on the premise that underage marriage was part of the traditional Gypsy culture and to prevent it would violate the rights of the ethnic group. Pamporov rejects this thinking. "Such a resolution is absurd. The rights of the individual stand for more than the rights of the group." He points out that this state of affairs is partly due to the actions of the Roma leaders. They take on the role of protectors of the traditional Gypsy identity, because an audience of uneducated people who become parents in their teens is much easier to control later.

The stiff resistance that many Roma leaders put up against the policies of integration has another adverse effect. It added impetus to radical Bulgarians for whom the theory that "gypsies admit of no integration" holds the same degree of truth as that of the sun rising in the east.

Symptomatic of this attitude, a pseudo news item went viral during the Katunitsa riots. It was published on a website dedicated to made-up stories but many – news outlets included – took it at face value. On the website President Nicolas Sarkozy of France was reported as commenting on the events in Bulgaria by saying that "only Hitler is capable of integrating the Gypsies." The fact that in 2010 France expelled hundreds of Bulgarian and Romanian Roma only served to add credibility to the false report.

"It is true that Sarkozy expelled unintegrated Roma," Pamporov says. "But in France itself there are quite strong social policies directed towards the local Roma. In Europe, Bulgarian Roma become visible only where they have failed to integrate. Has anyone heard about Bulgarian Roma expelled from Spain, Greece or Germany? No, and that's because they go to these countries to take up work."

There are no statistics about how many Roma go to work in the European Union. Pamporov's research, however, has shown that Gypsies in Bulgaria have a greater proclivity to go abroad in search of work than do ethnic Bulgarians – the percentages are upwards of 10 percent and 7 percent, respectively. The preferred labour migration destinations are Spain and Greece, where there is seasonal employment in the agricultural sector, and Germany, in construction.

"When the EU states react, they do not do so against the Roma as such. They react against the unintegrated Roma from Eastern Europe," says Pamporov and gives an example where the French government got actively involved in an issue that concerned Bulgarian Gypsies.

A family of Bulgarian Roma went to Bordeaux, and for several months the parents did seasonal work. During this period, their daughter, in accordance with the law, attended French school. But the parents' work came to an end, and the family started packing up to return to Bulgaria. The girl wanted to continue her education, however, so she sought help from the director of the school. She explained that she would like to continue her education but that at home, in Bulgaria, she would probably be sold off as a bride.

The director travelled to Bulgaria (this is when Pamporov became familiar with the case) and then contacted the Bordeaux authorities. A solution was found: the family were offered a place to live and work in France and the girl continued her education.

So far, unfortunately, such a turn of events on Bulgaria itself looks like wishful thinking, because ethnic tensions are acquiring an increasingly sinister aspect.