On its way to borderless Europe, Bulgaria has good intentions, encouraging statistics and vague immigration policies

"Under Communism we stopped people from sneaking out of Bulgaria, now we stop them from sneaking in,” the border guard explained as he unlocked the padlock at one of the checkpoints in the border zone near Malko Tarnovo. Between Bulgaria and Turkey lies a strip of barren land surrounded by barbed wire. Before he let us through, the ofﬁcer alerted his colleagues by telephone – an old bakelite receiver tucked under a sheet metal awning that looked like a throwback to the Korean War.

As long as Bulgaria's Border Police make calls on ancient telephones, however, it remains difﬁcult to dodge the question of whether the country can protect a zone known for its strict security measures and tight border control. Bulgaria faces a grim task. It is literally the gateway to Europe and has often been a favourite channel for smuggled drugs, goods and people.

Since EU accession the number of immigrants and refugees has increased. Bulgaria borders on Serbia, Macedonia and Turkey which makes things even more complicated. Grancharova described Bulgaria's entrance into Schengen as an “ambitious, but realistic goal”.

Dennitsa Nedeva of the Open Society Institute, who authored the report “The State of Preparedness of the Republic of Bulgaria for Joining the Schengen Zone,” however, pointed out formidable hurdles: “Bulgaria is on schedule with only small problems in its legislation. The real problem, however, is its implementation and the lack of a consistent and well-formulated immigration policy.”

“In 2007 the Border Police apprehended 1,300 of the 1,596 people who attempted to cross the border illegally,” declared Interior Minister Rumen Petkov. His ministry has provided 77 million euros of the 240 million needed to update border security technology. Better yet, according to the Border Police's annual report, during 2007 they arrested 4,755 wanted individuals at border points – a 43 percent increase over 2006. Sound impressive? Not really. Bulgaria has instituted EU “one-stop control” only at its Romanian border checkpoints. It hasn't even begun discussions on the topic with its fellow EU member Greece. If you go to any one of Bulgaria's 11 border checkpoints with non-EU countries, you may get the impression that the Bulgarian authorities' main concern is collecting the four leva fee for disinfecting your car. Only the Lesovo border checkpoint follows the “common ﬁche” principle.

The others still use the old-fashioned – and corruption-friendly – system. Corruption and customs have been inseparable since the founding of the independent Bulgarian state. Not coincidentally, the protagonist of a story by one of Bulgaria's most famous satirists, Aleko Konstantinov (1863-1897), dreamed of “being blessed with a job at the Salonika Customs House”.

A century later, after 1989, border abuses reached staggering proportions. Organised crime took control of the drugs, prostitution and duty-free smuggling channels created by the former State Security during Communism. Of course, this shady trade depends on crooked customs ofﬁcials and duty-free shops on the borders, which help hide the contraband. In the years preceding EU accession, Bulgaria ﬁnally made some changes – again much too slowly.

Finance Minister Milen Velchev's attempt to close 44 duty-free shops failed after the Association for Duty-Free Trade warned that the government would “lose more than 450 million euros and risk its national security”. In 2007 duty-free shops at Romanian and Greek border crossings closed down. However, Deputy Minister Georgi Kadiev's bid to shut down those on the Turkish, Serbian and Macedonian borders ended in failure – and his resignation.

At the beginning of 2008 Prime Minister Sergey Stanishev decided to close them – only after the European Commission's critical Interim Report pointed out duty-free shops as a hotbed of corruption and crime. Meanwhile, the Border Police have been zealously rooting out the black sheep in their own ranks. In 2007 they sacked 21 employees for corruption and every drugs smuggling bust is trumpeted to the media. One of the agency's most enthusiastically advertised campaigns, however – conveniently launched shortly before the European Commission report – had an unexpected and embarrassing result.

When the Organised Crime Unit, or GDBOP, caught Serbian Budimir Kuyovic – who had been extradited in 2005 for drugs trafﬁcking – in Plovdiv, they found a perfectly legal Bulgarian passport and ID card in his pocket. While the photos were his, the names weren't. Yet they were genuine Bulgarian Interior Ministry issue – bearing the signature of Secretary Iliya Iliev. He had resigned shortly before this incident without citing a reason.

Against this backdrop the tightening of border control begins to look more like cosmetic surgery than a real operation. While it waits to join the Schengen zone, however, Bulgaria will have to struggle with sticky issues: the implementation of visas and the particularly thorny problem of what to do with foreigners who don't come to Bulgaria to buy holiday homes.

A large ﬂow of people regularly travels between Bulgaria, Serbia, Macedonia and Turkey. Macedonians and Serbs come here to study at universities, shop at supermarkets, go on holiday or visit friends and family. Until 1 January 2007 they crossed the border without a hitch. Now, however, they need visas. Bulgaria has tried to soften the blow by offering free visas. Deputy Foreign Minister Milen Keremedchiev doesn't think the new visa regime is a big deal: “We wouldn't say there are large problems or a decline in economics or tourism caused by the introduction of visas (by the European Commission). In 2007 Bulgaria issued 70,000 visas to Macedonians, the same number to Serbians and 197,000 to Russians.”

Schengen visas, however, are not free. “Accession to the EU reduced the ﬂ ow of tourists and visitors from neighbouring countries and it is likely that this tendency will increase after 2011. This will lead to a reduction of ‘suitcase trade' with Serbia and Macedonia, but could possibly affect traditional economic relations as well,” said Asya Kavrakova, director of the Open Society Institute's European Policies and Civic Participation Programme. 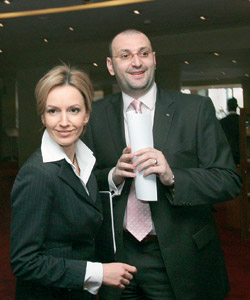 How will this affect people in these countries who consider themselves Bulgarian?

“If minorities who live on both sides of the border become isolated from the mother country, this will most likely have a social effect,” Kavrakova explained. Some, however, have already found a cheap and easy way to avoid waiting in line for visas. They have applied for Bulgarian citizenship, claiming Bulgarian ancestry. In 2006 Lyupcho Georgievski, the former prime minister of Macedonia, got a Bulgarian passport in precisely this way.

The trend is catching on and appears to be motivated more by pragmatism than by a desire to return to a homeland – real or imagined. “In 2007 we received 12,411 applications for Bulgarian citizenship. Six thousand of them came from Macedonian citizens, and 1,000 from Moldovans,” announced Vice President Angel Marin, whose jurisdiction includes the power to grant and revoke citizenship. Between 2002 and 2007 applications numbered 39,076. “Of these, 13,925 were from Macedonian citizens.

”It appears Bulgaria has been a bit too welcoming to those who consider themselves ethnic Bulgarians – whether from conviction or convenience. “In 2007 we established that 711 applications from Macedonian citizens were based on false documents,” reported Marin. The vice president fears that “some of the people requesting citizenship are criminals wanted by Interpol who are looking to change their identity in this way”. In the meantime, the number of people who want to live in Bulgaria without having any prior connection to the country is increasing. In 2007 the number of immigrants – primarily from Turkey, Afghanistan, Iraq and Palestine – who tried to enter Bulgaria illegally rose by 64 percent in comparison to 2006.

Reversed Roles: Erected during Communism to prevent Bulgarians fleeing to Capitalist Turkey, this barbed wire installation is still in place - to prevent illegal immigrants from Turkey to cross into the EU

The headcount of legal immigrants has also risen. Bulgaria still has no idea what to do with either kind of immigrant. The only working facility for the temporary accommodation of foreign nationals in Busmantsi near Soﬁa ﬂies under the legal radar. As reported earlier in VAGABOND (see Issue 12), some foreigners are detained there for more than six months without being extradited or freed – in direct violation of Article Five of the European Convention on Human Rights. Foreigners who want to stay in Bulgaria legally also don't have it easy. On the one hand, there is no clearly established policy for their integration. On the other, the process a Bulgarian employer has to go through to hire a foreigner is so complicated that most prefer to pay workers in the hand. Whether Bulgaria will succeed in meeting the requirements to enter the Schengen zone is a question of time and effort on the part of the institutions, which still cling to the old Communist habit of extreme secrecy.

“It turns out that access to legislative acts and to strategic and other documents is virtually impossible because relevant information is provided on the Internet either sporadically, partially or in an untimely fashion,” Nedeva concluded in her report. For now, however, forecasts are optimistic. “At this stage, at least, the year 2011 looks like a realistic goal,” says Kavrakova. This might mean that the Border Police will soon get new telephones. It's unlikely their current models are compatible with the new Schengen SIS II security system.

Read 5825 times Last modified on Friday, 01 July 2016 11:47
Published in Bulgaria Politics
More in this category: « ALL THE PRESIDENT'S HACKS ARMY OF TROUBLES »