by Milen Radev; photography by BTA
Rate this item
(0 votes)

The murder of Alexander Litvinenko bears uncanny resemblances to the murder of Georgi Markov 28 years earlier. To an extent

There are ingenious crimes in terms of scale or the perfect concealment of their perpetrators. Recently, we have witnessed a crime that is ingenious as a scheme.

Every day following the murder of Alexander Litvinenko brings new details to the symbolic message that the evil genius behind this plot is sending.

The former Russian secret service agent was a well-known figure among Russian emigres in the West. He was one of the most outspoken critics of the Kremlin. And he was not a marginal character without citizenship or protection. He had recently become a naturalised British subject and been assigned police protection as well as private guards as a person whose life was under threat.

With his elimination, brought about in a particularly agonising and sinister way, the mastermind behind the crime made it clear that none of its adversaries should feel safe. The choice of the murder weapon had been made in keeping with the best traditions of Cold War terrorism. When a traitor from inside the KGB has to be punished, his death alone is not enough; the members of his family must also die. Any political assassination must be turned into an example to scare others. Now there is news that Alexander Litvinenko's widow, his father, and even his son, have also tested positive for radioactive particles. The poison, polonium, affects not only the immediate target, but also his family and close friends, those who have stood by his deathbed. Though not lethal at present, the dose is enough to cause cancer in the future, experts claim. The wickedness of all this is mind-boggling.

The crime has a more far reaching message. Someone who exercised his basic human right of freedom of speech was assassinated in the midst of Western civilization. The similarities with the murder of Bulgarian dissident writer Georgi Markov 28 years ago are obvious (see here). However, there are important differences.

During the Cold War the frontlines were a lot better defined, and it was easy to at least guess where the deadly orders were being issued. Today, matters are much more complex. 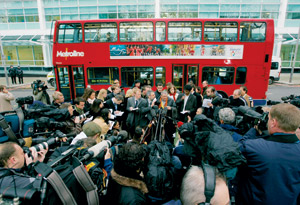 Walter Litvinenko, centre with orange scarf, the father of the dead former spy Alexander Litvinenko, accuses Russian President Vladimir Puin (below) of having killed his son

Litvinenko was killed using an as yet unknown deadly device. It is clear to any thinking member of Western society that a weapon of incredible potential has been unleashed for the first time. "We can use it anywhere and on a much larger scale, if necessary," is the message being sent. The aim is to make the West a hostage of its own fears, just in keeping with the notorious Gromyko doctrine. Nobody knows when and where a probably unsuspecting perpetrator, a victim himself, will blow some deadly cigarette smoke, or where and when some aerosol capable of fatally injuring thousands of people will be sprayed.

Burying our heads in the sand will be of no help to anyone. Sooner or later we will be faced with a situation of helplessness in the face of an adversary who aggressively lays down his terms. Recent history has given us enough examples of this. Edward Lucas from the Economist wrote that Alexander Litvinenko's murder marked the beginning of a new Cold War. Some are scared by this conclusion; others see it as wishful thinking. The West, the community to which Bulgaria now belongs, has but a single chance to preserve its democratic way of life established over the decades. This chance, however peculiar it may seem, is that Ed Lucas's prophecy comes true. Otherwise, our cultural and political values will continue to erode, imperceptibly, until they become a spineless, sclerosis stricken appendage to the ruthlessly advancing giant from the East. 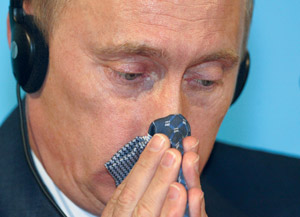 Few Western politicians appear to realise the dramatic power of the threat. The process of confrontation inevitably leads to better identification of where the frontlines are. The issue is whether we shall find the will and determination to survive; a survival not only physical, but spiritual, political and cultural - if necessary, despite the Russian gas pipelines.

Read 5175 times Last modified on Friday, 01 July 2016 11:52
Published in Bulgaria Politics
More in this category: « THE QUEUE IS NOT MOVING EU? BLAGODARYA BEAUCOUP! »