by Stoyana Georgieva; photography by BTA
Rate this item
(0 votes)

Sofia's Mayor established a party which has ambitions of being a serious political player in Bulgaria. At the core of his agenda is a three-digit figure: 800

The citizens for the European Development of Bulgaria, or GERB, is Bulgaria's most recent political party, founded by Sofia Mayor Boyko Borisov. It has started out with a daring populist appeal. "The tax free monthly allowance must increase to 800 leva with a view to becoming 1,000 leva," declared Borisov to the delegates of the founding assembly on 3 December 2006. At that time, the minimum wage was 180 leva (£60) per month.

Zero tax rates for investment in key economic sectors, reduction of VAT, revoking of taxes on inheritance, gifts and company entertainment allowances, and tax exoneration for undeclared income are some of Borisov's other appealing promises. As the fulfilment of these in the next five to 10 years is unrealistic, it seems GERB is merely using this rhetoric as a tool to come to power, and has no real intention of delivering. However, this is of little significance to Bulgarian voters, who do not read party programmes and readily place their trust in all sorts of political propaganda.

The number "800" was also key to the agenda of former Bulgarian King Simeon Saxe-Coburg, who returned from a long exile in Madrid in 2001. He promised to improve living standards for Bulgarians and raise their income "immediately and non-symbolically" within 800 days. Protests by critics that this would require a miracle only served to increase Bulgarians' fervour in electing Simeon as prime minister.

Four years later, they toppled him from power with the same passion with which they had elected him.

GERB is a sort of remake of the king's party, the Simeon II National Movement, or NDSV, as it has no clear ideology and propounds to be centrist. In Bulgaria this translates as wanting to preserve one's readiness to enter into partnerships or coalitions with parties from all shades and hues. This approach is supported by the character of the 47-year-old I've-played-Hamlet-I've-played-poker GERB leader.

Mr Borisov graduated the Interior Ministry Academy with a degree in fire fighting, but after from the that became the head of the notorious security firm Ipon. He was the personal bodyguard of both former Communist dictator Todor Zhivkov and former King Simeon II, after the latter returned from the exile imposed on him by the Communists.

Boyko Borisov was also an associate of the former SIK group, considered to be part of the Bulgarian mafia. He suddenly turned over a new leaf in the autumn of 2001, when Simeon Saxe-Coburg appointed him chief secretary of the Interior Ministry and thus started his dazzling political career.

Depicted every day in the media undertaking heroic acts such as personally filling pot-holes in roads in Sofia, Borisov soon became Bulgaria's favourite reality show. When, after Borisov had resigned from the Interior Ministry to become mayor of Sofia, the action movie Cobra, starring Sylvester Stallone, was shown on Bulgarian TV, Sly's "good cop" character looked decidedly familiar to the Bulgarian audience. Standing up against the bad guys and corrupt judges, uttering the refrain "We arrest them, but they let them go free," it was obvious who one of Borisov's role models was. 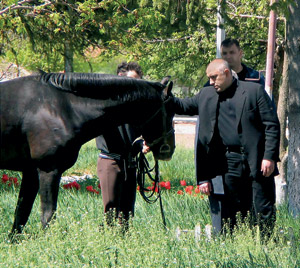 Boyko Borisov observing dressage horses in the village of Getsovo

His successful media image and appealingly roguish tongue have won over the general public, who believe that Borisov is on their side: he wants to put the bad guys in jail, but others deter him; he wants to clean up Sofia's rubbish, but the government and the previous mayor lay traps for him. He thought of himself as the sole guarantor for the successful functioning of the Interior Ministry and now believes the same to be true for the management of Sofia and the realisation of his new party.

It did not occur to the founders of GERB to undergo any democratic procedures to elect a leader and governing bodies. Because the law does not allow Borisov to be a mayor and a party leader at the same time, he offered the post to his previous deputy in the mayor's office (and in the Interior Ministry before that, too), Tsvetan Tsvetanov.

"Listen and know that Tsvetanov tells you what I have said - and please don't question my proposals," Borisov told the group of nearly 4,000 party founders.

He and Tsvetanov sat in beige armchairs on the dais of Hall 1 in the National Palace of Culture while large plasma screens showed Borisov's meetings with rank-and-file members of the public.

Everybody addressed him as "general", the rank he was promoted to from captain after being appointed Interior Ministry chief secretary by then president Petar Stoyanov. In the NDSV, the accepted title for its leader Simeon Saxe-Coburg is still "Your Majesty". Without an ounce of doubt who the real leader of GERB would be, Borisov threatened to disband the party if it "tarnished" itself and became "like all the rest". He also warned that there were people who had "infiltrated" GERB and who as such were no good. They stood a chance only until he exposed them, however, and he promised to do this and kick them out in "10-20 minutes".

Six years ago, Simeon Saxe-Coburg promised a similar thing, to remove from office NDSV MPs who did not live up to his expectations. It would soon emerge that he had no legal right to do this.

Nothing is impossible for Boyko Borisov, however, and we will probably see retribution and the dismissal from GERB of anybody who voices a dissenting opinion, or with whom the general finds fault.

Though its ratings have been falling in recent months, especially after the ascent of ultranationalist leader Volen Siderov in the presidential election, polls indicate that GERB has large public support and probably ranks second after the Bulgarian Socialist Party, the BSP. 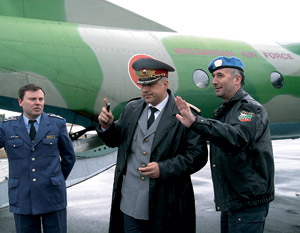 Sociologists claim that Borisov has the chance to take up some of the rightwing political space which is now occupied by several parties whose leaders do not even talk to one another. Borisov has been thinking of himself in rightwing terms lately, and has focused his efforts along this political line. There are hardly any serious ideological or political grounds for this orientation. Adopting a purely pragmatic approach, he has calculated that his chances on the left are slim, because the BSP is now in power and has a stable electorate.

Borisov named as his main political opponent the ruling coalition between the BSP, NDSV and the Movement for Rights and Freedom, or DPS. Yet, he spoke in defence of the architect of this coalition, former BSP leader President Georgi Parvanov, and even instructed fellow party members not to be critical of him: "Parvanov won the elections and I congratulate him. Only I can speak about Parvanov. You are not to talk about Parvanov any longer. Right?"

Political analysts have speculated that GERB is the BSP's new "rightwing" project. Some have pointed out the coincidence of two dates: Borisov founded GERB on 3 December 2006, and the last coat of arms (gerb means coat of arms or emblem in Bulgarian) of the Communist People's Republic of Bulgaria was approved on 3 December 1971.

A few months ago, Borisov inadvertently let slip that his sympathies lay mostly with Volen Siderov's party Ataka and that he intended to build his political project together with it. He soon backed out, however, saying that he had nothing to do with Ataka, and that the party would not be accepted well by the EU or NATO.

While still in the Interior Ministry he managed to win the favour of the German Hanns Seidel Foundation, which backed his political ambitions. GERB's programme was drawn up in collaboration with experts from the German Christian Social Union and the founding of the party was welcomed by Hans-Gert Poettering, leader of the delegation from the European People's Party in the European Parliament.

In his inimitably eclectic style, Borisov combines nationalistic appeal - he is against the Turkish language news programme on Bulgarian National Television and DPS leader Ahmed Dogan's strong position of power - with pledges of allegiance to European values. There is something for everyone in his agenda: reduction of taxes for business; the fight against crime and corruption for the people and the EU; the opening of the secret service archives and a ban on its former agents taking senior positions in his party for the anti-Communists.

At the same time, he is aligning himself with the powerful Russian-Bulgarian lobby in defence of the Kozloduy Nuclear Power Plant against the EU's demand for the early decommissioning of its reactors.

What is Borisov's manifesto? "Those who know me are aware that I do not want to rule. I want to take the reign and give it to you. The empty government seats must be taken. This is the aim," announced Borisov at GERB's founding assembly.

He did not mention any deadlines for achieving his aims. Until recently, he had been talking of early parliamentary elections, but he is now not so sure he can prompt them. The first test for the new party will be the European Parliament elections in May 2007, when Borisov may end up with a considerable parliamentary group in Strasbourg, though not a single MP in Bulgaria.

It remains to be seen with whom this maverick politician will align himself next, and whether appealing to all will in fact result in winning the favour of none. The Bulgarians are now in for yet another 800 days.