History repeats itself. In the past Bulgaria was a Soviet satellite country, member of the Warsaw Pact and a part of the Council for Mutual Economic Assistance (COMECON)*. After a turbulent period of transition from command to market economy, Bulgaria consecutively became a member of NATO and the EU, of which it is now into its second month of membership. Having achieved its European political dream, backed up with open access to the lavish EU structural and cohesion funds, Bulgaria is turning its attention towards solving its internal problems and setting new goals for regional development.

The EU budget for 2007-2013 foresees 11.1 billion euros for Bulgaria, which represents 1.29 percent of the EU budget for the seven-year period. More than 6.8 billion euros will be allotted to Bulgaria from the EU Structural and Cohesion fund by 2013. Planning and intervention will allow for fair treatment for all Bulgarian regions based on their individual capacities and characteristics, which will lead to improved infrastructure and services, a favourable business environment, and growth in entrepreneurship and employment.

"Cohesion" is defined by the EU as being balanced territorial development, achieved by fostering regional competition and cooperation, and the development of infrastructure in order to create conditions for economic growth and employment. This raises the attractiveness and quality of life in the regions. However, if these terms sound too vague, or you are wondering exactly what the steps to achieve this "balanced development" should be, read on to learn more about Bulgaria's regions and their potential for development under the EU.

The beauty is in the details. The country is divided according to EUROSTAT standards into six planning regions: the Northwestern (NW) region with Vidin as its centre; the North Central (NC), centre: Rouse; the Northeastern (NE), Varna; the Southeastern (SE), Burgas; the South Central (SC), Plovdiv, and the Southwestern (SW), Sofia. In the past Bulgaria has experienced the catastrophic results of so-called "central planning", where the state authorities controlled and planned all economic activity in the country. Today the government is considering a more flexible approach in which state agencies oversee proceedings, but offer administrative support to, and work together with, smaller municipalities that lack the capacity to prepare effective development programmes and thus attract more resources.

The biggest threat to Bulgaria's bright European future is the lack of administrative and technical capacity to absorb funds. This will lead not only to low usage of available resources, but will also deepen current socio-economic problems and worsen unbalanced regional development. At present, Bulgaria considerably lags behind the 25 EU member countries in terms of GDP per capita. In the most developed SW region, GDP per capita is 42 percent of the EU-25 average, but when combined with the rest of the regions to give a national average, this goes down to just 28 percent of the EU-25 average.

* COMECON was an economic organisation of Communist states, a kind of Eastern Bloc equivalent to the European Economic Community, of which Bulgaria was a member in 1949-1991. The military counterpart to the COMECON and alternative to NATO was the Warsaw Pact. 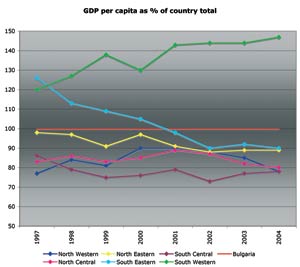 In fact, Bulgaria has relatively low regional disparities compared to the other EU member states. Statistical data demonstrates considerably small disparities among the regions, bar the SW and Sofia where the country's business activity is concentrated, and which enjoys the highest growth rate. Nevertheless, the overall picture is not rosy.

The Bulgarian planning regions are characterised by a number of inter-regional and intra-regional disparities. The common problem is the ageing and decreasing population in all regions, with most unfavourable demographic trends observed in the NW and the NC regions. The rates of the decrease in the population in these regions over a period of 15 years are, respectively, 12 percent for NW, which is twice the national average of six percent, and almost seven percent for the NC region.

The network of settlements in Bulgaria demonstrates an uneven dispersion of large cities, which contrasts with a generally even dispersion of small towns and villages. As a result, large portions of the national territory remain remote from the large urban centres and are demonstrative of what is often termed the "centre-periphery" problem. The uneven distribution of large cities is considered to be a major cause of the uneven socio-economic development inside the regions and, to a large extent, among the regions. Most manufacturing activities, services, education, scientific and cultural life are concentrated in seven cities - Sofia, Plovdiv, Varna, Burgas, Ruse, Pleven, and Stara Zagora - which positively influence and develop their surrounding areas. It is not by chance that the two largest cities in Bulgaria - Sofia and Plovdiv - are situated in the strongly developed SW and SC regions. 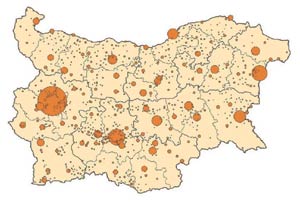 The areas and regions that do not have a large city in their proximity remain largely underdeveloped. Such areas are situated in the northwestern, southwestern, southern, southeastern and northeastern parts of the country. The presence of some medium-size cities within these areas does not compensate for the absence of a large urban centre to organise the economic life of the region. The 25 medium-size cities in Bulgaria have only complementary or fading functions at present, though many of them have a great hidden potential to develop if proper investment and infrastructure projects are undertaken. Urban development, therefore, is a key factor for regional development and in reducing the imbalance in intra- and inter-regional development.

The differences between regions and emergence of peripheries typical of Bulgaria are, to a large extent, linked to the development of the transport system. The isolation of certain areas mostly results from lack of infrastructure and limited public transport, lack of economic activities, high unemployment rates, depopulation of settlements and migration, difficult access to information, contacts and markets, and low provision of public services. At present, only two percent of the roads in Bulgaria are highways and a mere 16 percent are classified as "first-class" roads. The low share of major roads in the country prevents the rapid development of the economy and accounts for the moderate levels of FDI attracted.

The growing trend towards polarisation in favour of the large urban centres attractive to foreign investment, and certain medium-size cities well situated in proximity to the main communication axis, enhances the role of transport infrastructure in regional importance. The influence of the large urban centres on their agglomeration areas and their future development is determined by how developed the regional road network is and the opportunities to access the services concentrated there.

The answer to the complex socio-economic regional problems in Bulgaria is simple: roads and proper infrastructure. The country's favourable geographical location, as a link between Europe and Asia and a bridge between the West and the East, predetermines to a great extent Bulgaria's potential function from a transportation point of view: as a transit state between the Middle East, Western and Central Asia, all rich in natural resources, to the East and Southeast, and the economically and industrially advanced states of Western and Central Europe to the West and Northwest. The North-South route, connecting the Baltic Sea to the Mediterranean Sea, also has a specific potential, which is yet to be adequately developed. 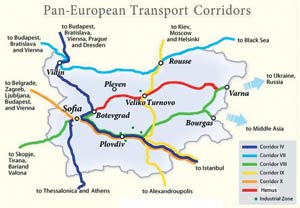 The fact that five of the total of 10 Pan-European Transport Corridors, namely Nos. 4, 7, 8, 9 and 10, will traverse Bulgarian territory, is both a positive and a demanding circumstance, as it requires huge investment for the physical integration of national with European infrastructure, the result of which will be better connections and increased cohesion between Bulgaria and EU member states. The future development of the country and its regions will depend largely on these international transport corridors and highways. All potential investors would be well advised to review the map above when considering where to invest in real estate or locate a business. Improved infrastructure will allow for the free movement of goods and services both domestically and abroad. Bulgaria has great potential to develop as a logistics centre in the Balkans, provided construction works start soon. So, next time you hit a pothole on the road, just try to concentrate on Bulgaria's bright future.

Read 5803 times Last modified on Tuesday, 20 August 2013 14:52
Published in Bulgaria Economy
More in this category: « ANCHORS AWEIGH UP OR DOWN WITH THE EU »