DUST TO DUST IN CENTRAL SOFIA

A mausoleum used to display the embalmed body of Bulgaria's Stalinist dictator Georgi Dimitrov. Now it is a car park

It is August 1999 and Lilyana Ilieva from Varna stumbles through the dark that envelopes the centre of Sofia at night. She reaches a huge ruin and, like several other people, crouches down by the pile of rubble that has spilled out of the mesh fencing surrounding the wreckage. Lilyana chooses a bigger fragment and puts it in her bag. "My father was in the army construction corps in 1949 and took part in the building of the mausoleum. When he learnt I was coming to Sofia, he asked me to bring him a piece of it. It was one of his dreams – to see the building demolished," Lilyana says.

When the Berlin Wall fell, the Germans collected pieces of it as souvenirs and to assure themselves that it had become an irretrievable part of their past. A similar thing happened in 1999, when the Union of Democratic Forces, or SDS, government decided to "deconstruct" the mausoleum where the body of Georgi Dimitrov, Bulgaria's first Communist dictator, had been on display for veneration from 1949 until 1990. 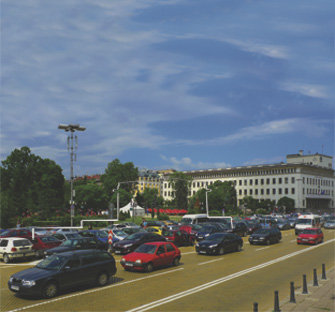 While nobody had any doubts about demolishing the Berlin Wall being a good thing, in Bulgaria there are still ongoing arguments about the justification for tearing down the mausoleum. For some people, it was the symbol of a foul regime and an eyesore blighting the centre of Sofia. For others, and for the same reasons, the mausoleum should have remained where it stood as a reminder, and been put to some other use. Then there are those (the more nostalgically minded hangers-on of the Communist regime) who think that the "deconstruction" of the tomb of the "great statesman" Georgi Dimitrov was sacrilege.

The man who was extolled as the Leader and Teacher (with capital letters) was born in the village of Kovachevtsi near Pernik in 1882 and became Bulgaria's youngest MP in 1913. Ten years later, in 1923, he left the country after organising the ill-fated September Uprising, on Soviet instructions. In 1933 Dimitrov made world news because of the Leipzig Trial: he was among the Communists charged with setting fire to the Reichstag. The fabricated Nazi accusations caused a wave of outrage. Dimitrov was acquitted, received refuge in Moscow, entered the circle of Stalin's cronies and by 1935 had already supplanted Vasil Kolarov, another Bulgarian, as general secretary of the Comintern. Dimitrov did not return to Bulgaria immediately after the Communist coup of 9 September 1944. He came back only after a dubious referendum proclaimed the Kingdom of Bulgaria a "people's republic." Unsurprisingly, Dimitrov, who had grown a moustache à la Stalin, was elected prime minister. 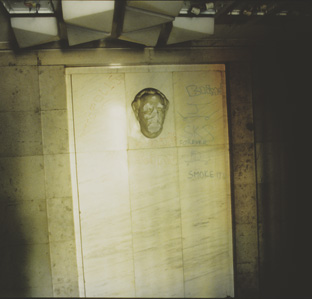 In the 1990s the mausoleum was used as a meeting place for Socialist rallies, opera performances and a public pissoir

His death on 2 July 1949 in Moscow was completely unexpected.

The news shocked Bulgarians, who had been living under constant stress during the Communist terror, which found expression in the staged trials of opposition leaders, political assassinations and the setting up of labour camps. Apprehensive about possible unrest, Communist functionaries decided to show everybody that, although Dimitrov was dead, his spirit was alive. On the night of 2 July, the Council of Ministers decided to embalm the Leader's body and put it on display in a special mausoleum, like Lenin's.

While the special train carrying Dimitrov's body was making its way to Bulgaria, Sofia was in the grip of frantic preparations. There are several versions about the circumstances under which architect Georgi Ovcharov was commissioned to design the building. According to one, Ovcharov, who had been regarded as "the court architect of King Boris III," was taken out of the Belene Camp to draw up the plans for the mausoleum. Another story states that Ovcharov was no longer an internee at that time. He was taken from his home in the dead of night and – together with several more of his colleagues – driven to the Council of Ministers. Ovcharov's design won the improvised competition, although it underwent some corrections: the Doric columns were rejected as too "bourgeois."

The army construction corps rolled up their sleeves on 4 July and worked day and night, in spite of the fact that between two and six of them died during the building (no exact data is available). On 10 July the mausoleum was ready, albeit with an unfinished façade. Dimitrov's body was laid in it after an official funeral procession. In the next few days, thousands of Bulgarians came by to pay their last respects and, paradoxically, some of them crossed themselves, as can be seen in the archival footage used in Matthew Brunwasser's film A Better Tomorrow, on YouTube. 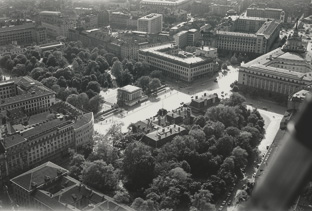 In December 1949 the mourners' hall of the mausoleum welcomed visitors again, and this time they came to see Georgi Dimitrov's embalmed body displayed in a glass sarcophagus, like a macabre Communist version of Snow White. Maintaining the dictator was a tough job. Four doctors were employed full time to take constant care of him and "overhaul" his corpse every 18 months. The best air conditioning system in Bulgaria (it was renewed extensively in the 1970s) maintained a temperature of 17°C and the necessary humidity. In case of war, there was a plan to evacuate the body to a shelter in the Balkan Mountains. Perhaps the most sinister job was that of Dimitrov's tailor: a man still alive today who had been employed to sow suits for the mummy as it required new clothing after each chemical "rejuvenation."

Although macabre, the mausoleum, with its entrance flanked by national guards, was a mandatory item on the itinerary of every organised tour from all over Bulgaria. Even children, compelled to become members of the Chavdarche or Pioneer organisations, had to visit the Leader and Teacher in his mausoleum.

It was not simply a tomb. It also became a centre of Communist propaganda. Until 1989, all parades in Sofia to celebrate all state holidays filed past the mausoleum. There, on a balcony, stood the heads of the Communist Party and the state, waving at the marching Sofianites, who were under obligation to take part in the ceremonies.

This is why Sofia's citizens hated the mausoleum.

Dimitrov's embalmed body left its tomb on 17 July 1990, when the government of Andrey Lukanov (one of those who toppled Todor Zhivkov from power with Soviet approval) decided that the dictator should be buried. That same night, Boyko Dimitrov, son of Georgi Dimitrov and interior minister in the last BKP government, removed the corpse and buried it in the Protestant section of the Orlandovtsi Cemetery. Indeed, Dimitrov had been baptised a Protestant.

The mausoleum remained empty, but it was not forgotten.

Within a few years it was vandalised with graffiti inside and out. Its balcony was used as a stage for rock concerts. In 1997 it was painted with black spots for the Bulgarian premiere of Walt Disney's 101 Dalmatians. There were many ideas for putting it to a new use. Mayor Stefan Sofiyanski suggested it should become an art museum, while Georgi Parvanov, then chairman of the BSP and now Bulgaria's president, opted for a monument to military glory. Some enterprising people wanted to convert it into a disco. A group of intellectuals suggested a museum of Communism and journalists from the 24 Chasa daily favoured a tamagotchi cemetery. Sofia Opera proved that actions speak louder than words, when it used the mausoleum as a natural set for its performances of Aida, Tsar Kaloyan and Prince Igor. 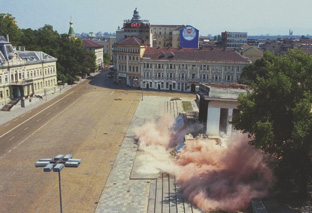 The end of the Mausoleum's existentialist drama came on 21 August 1999. It had been constructed without public debate and it was demolished without it, by Ivan Kostov's democratic government and with Stefan Sofiyanski's approval.

The demolition of the mausoleum was conceived and carried out with maximum publicity by Minister of Regional Development and Public Works Evgeniy Bakardzhiev. Unfortunately, it was a huge anti-climax. The building withstood the first controlled explosion on 21 August, and also the second. It was only the third detonation that managed to bring down the massive concrete walls, which had been reinforced in the 1970s to resist a nuclear attack. The last remains of the tomb were removed on 27 August. Contrary to government fears, nobody organised mass protests against the demolition of the mausoleum.

For the first time in several decades, Bulgarians could see the square (it was called 9 September under Communism) in the heart of Sofia as it was originally designed to be – empty; and they discovered that nobody had any clear idea how the gap, and the memory of the brooding presence of the mausoleum, could be filled. For a brief time, the site was covered with a flower garden dedicated to the EU, but that was soon abandoned and became a public toilet. For a while it was the meeting place for priests from the alternative synod of the Bulgarian Orthodox Church, who held their services in the open air. Today, the place of the former tomb is taken up by a car park and a café.