HERE, THERE AND EVERYWHERE

A museum of Communism in Bulgaria may not be necessary after all. It is all around us
What would go down in history as the first Bulgarian soap was aired in the late 1960s-early 1970s by Bulgaria's state television's only channel. It was partly a Western (good guys versus bad guys), partly a historical romance (every Bulgarian girl at the time was in love with Major Deyanov aka Bate Sergo, the series' surviving character played by Stefan Danailov – yes, the minister of culture in 2008). However, the soap, entitled Na vseki kilometar, or "At Every Kilometre," was mostly political propaganda glorifying the "heroic" struggle of the Communists against everyone else – from the bourgeoisie to the tsarist police to the Nazis to the vicious post-war diversanti, bad guys and spies operating primarily from West Germany seeking to destabilise the new regime. The soap's set included virtually all prominent Bulgarian writers, actors and film-makers at the time. Interestingly, some of its early episodes were co-written by Georgi Markov, the Bulgarian dissident writer who escaped to Britain and was assassinated in London in 1978 in the umbrella murder case. After his defection he became a non-person and his name was promptly obliterated from the credits.

The film's title, which can be freely translated as "Here, There and Everywhere," is now a household name to most Bulgarian families, including the younger ones – thanks to Bulgaria's national television's constant re-broadcasting of bits of it. Most people find it a historical curiosity rather than an offensive piece of Communist propaganda. Preoccupied with the rising prices of electricity and water, and angry with the EU's suspended funds, most Bulgarians just don't care any more...Indeed, one could argue that the Bulgarians' refusal to face the less pleasant aspects of their own history has been dictated by their constant immersion in it. Just like they are being exposed to inserts of Here, There and Everywhere on national television in 2008, most of them still have to live in places called Druzhba ("Friendship") and Youth ("Mladost"), have to walk past Stalinist monstrosities in city centres, breathe the pollution of derelict Soviet factories and meet at showcase examples of "Mature Socialism" like the NDK.

Communism is not in a museum in Bulgaria – it is na vseki kilometar. If you know where to look, your sojourn in this country will become a time travel experience no one else in the former East bloc is able or willing to offer. Partizani, or "Communist Guerilla Fighters," is a village in northeastern Bulgaria. There are other villages called various things like that in Bulgaria, and most out-of-Sofia places would still have at least a street called "Georgi Dimitrov," the Comintern boss who imposed Communism in Bulgaria in 1944. Officially, his name has been removed from maps and directories, but the reality is different. There is still a whole town in southern Bulgaria called Dimitrovgrad. It was erected in the 1950s by "voluntary" work put in by students and young people. Now it is known as Bulgaria's chalga capital. In Sofia, street names like Samolet ("Airplane"), Zvenovod ("Unit Leader") and Velikiya prelom ("The Great Turning Point") are no longer used. They should have perhaps retained our all-time favourite: Tezhkiyat tank, or "Heavy Tank" Street. Alas, they changed it to "Hope." 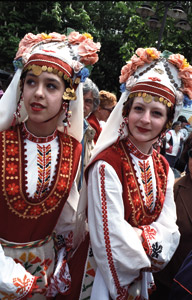 Thankfully, no one walks around dressed like that any longer, but organised folk culture is very evident, especially at BSP gatherings, public holidays and wherever President Parvanov rubs shoulders with the people. You will see organised folk on numerous TV channels, most of which alternate between traditional folk music and Turbo-Folk, known as chalga. There is nothing wrong with folk music per se, but to understand it better it would be helpful to know that its enormous popularity in 2008 is at least partly due to its active promotion by the government under Communism. The Communist establishment saw in folk music both a means to encourage patriotism and an antidote to vicious Western rock-and-roll. The government employed all its resources to finish Bulgaria's largest building in time for the 12th Congress of the Communist Party in 1981. Shortly after that Lyudmila Zhivkova died and the NDK was named after her: Lyudmila Zhivkova People's Palace of Culture, a name it retained until 1990. It is still here, in the middle of Sofia, where once several thriving neighbourhoods had to be demolished to make room for what now stands as an epitome of the 21st Century urban nightmare. On the outside it looks relatively well-kept, but do go indoors for a smack of its chandeliers and artwork. For the real thing, however, try to enter the tunnels under it. "1984" will look like paradise to you. Most former East bloc countries have now banned the display of Communist symbols and have torn down or neglected their Stalinist sculptural legacies. Not Bulgaria. Red Army monuments can still be seen in city centres, including Sofia. Not only that – diehard Communists and supporters of the BSP regularly gather around them to pay homage to the glorious past, express their support for the Socialists or just voice their frustration with democracy. Pictured here is the Stalinist monstrosity in the centre of Burgas. You've guessed it! Citizens lovingly refer to it as the "Alyosha". 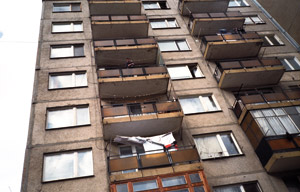 Forget about the pretty country houses and the increasing number of gated communities in and around Sofia. If you want to see how millions of Bulgarians really live, go to one of the kompleksi such as Obelya, Lyulin and Nadezhda. Every Bulgarian town and even some villages have a ring of kompleksi – most of them in various stages of dilapidation. They were erected in the 1970s, using prefab concrete, and were subsidised by the government to thwart a growing housing crisis. On the inside, you will see, they are as ugly as on the outside. The iron bars in the picture here is a post-Communist addition designed to stop burglars. For a bit of industrial history, go to Kremikovtsi near Sofia. Pramod Mittal bought it but obviously wasn't very serious about limiting the clouds of poisonous smoke its huge chimneys emit. Of course, Kremikovtsi is not alone. Most Bulgarian cities would have at least one similar establishment where you can see how the Bulgarians used to make their living while the Italians were manufacturing Fiats. The worst (and most sinister) example is the Kozloduy Nuclear Power Plant. Just look at its "First Atomic" sign and you will know what we are talking about. The Communist government was supposedly omniscient. One of its main activities was to administer wisdom everywhere – well, na vseki kilometar – and that resulted in thousands of signs being put up in public places telling you not to litter, to keep off the grass, or to beware of "falling bodies." It is not clear who invented those signs, but obviously the state had a department of sign-thinkers whose imagination often outdid their literacy. Signs like that exist everywhere, even in Sofia. Bring a Bulgarian friend and ask him to read every sign you see in the streets for you. Then jot down the translations in a notebook and you will have a concise guide to Communist mentality and thinking.The sign pictured here reads: "Throwing litter, eating seeds and spitting in the streets indicates base culture." OK, and the post box is from the 1970s – and is still being used by Bulgarian Posts. You now see Audis and BMWs flashing their headlights in the streets if you dare step in their way, but most Bulgarians have to make do with third-hand Opels and Fords. A significant proportion still tend to their Ladas and Moskviches that, surprisingly, still run. Some more inventive Bulgarians have made interesting transformations to their vehicles – or their cardboard, as is the case of the Traby pictured here.As late as the mid-2000s we saw a shop in Plovdiv advertising itself as "Spare Parts for Trabant." What in the 1970s and 1980s was supposed to be an exemplary Socialist town is... just that in 2008. You will be amazed that there are few feral dogs in Pravets, just an hour's drive out of Sofia, the pavement is in place, there are no potholes in the roads, and the town centre is actually pleasant for a stroll. Well, there is a very simple explanation for that – Pravets is the birthplace of Todor Zhivkov, the Communist dictator who ruled Bulgaria with an iron fist from 1956 to 1989. Hated and ridiculed during his reign, Todor Zhivkov is now becoming an increasingly popular figure with many Bulgarians who remember his low prices and no-crime times. What he failed to do for his country Comrade Zhivkov accomplished for his native village – he ordered the pavements, the public buildings and the parks – and as a result the Pravets people now consider him a benefactor rather than a tyrant. What is probably the only surviving monument to a Communist leader in Europe was officially erected in 2001 with much fanfare and with President Georgi Parvanov, then chairman of the BSP, in attendance. It's like going to Braunau and suddenly finding a well-attended statue of Hitler!For a display of the many gifts Todor Zhivkov received from people as varied as Saddam Husayn, Leonid Brezhnev and Gus Hall (remember the chairman of the Communist Party of the United States?) do visit the Todor Zhivkov Museum down the street from the Central Square. Tickets cost 1.50 leva per person, 1.00 leva if you are in an organised group.

Read 9479 times Last modified on Thursday, 24 March 2016 13:39
Published in Vagabond Features
More in this category: « THE ROAD TO NATO AND THE EU DUST TO DUST IN CENTRAL SOFIA »