HAS BULGARIA CHANGED FOR THE BETTER SINCE 1999?

SA backpacker retraces his steps and makes some surprising discoveries

Sitting with friends in a slick Ego pizzeria, it suddenly occurred to me that it was almost 10 years to the day since a Balkan Airlines plane made up of different coloured bits of metal first deposited me on the melting tarmac of Sofia airport to the wild applause of the passengers. In celebrating the sight of Bulgaria’s once-crumbling infrastructure, I am of course perfectly aware that this kind of "shittiness chic" so beloved of my generation of Western European travellers annoys many Bulgarians. Would I have noticed the colour of the wing metal on a British Airways flight? Probably not. But as foreigners, and travellers especially, we were trained to delight in those things that struck us as different from our homelands. And our home countries were comfortable, clean, efficient, well-governed... expensive, corporate, predictable, sterile. So Aleksandr Nevskiy Cathedral was pretty small beer for anyone who'd seen the old city of Dubrovnik, and Sofia can't really put up much resistance against a Prague or even a Budapest. But somehow we'd go home happy, full of merry tales of friendly people, village-strength rakiya and jokes about Moskvich cars.

The purpose of this article is to ask the question of how much of that idiosyncratic character of Bulgarian life that made it a backpacker paradise amid the hyper-inflation and social turmoil of the late 1990s has survived a decade of neo-liberal economic policies and globalisation. If you're a Bulgarian reading this, you are probably educated, urban and one of the (pre-crash) "winners" of the Transition who looks back on the 1990s as the dark days after your parents lost their life savings. Your life is probably better now – a little VW hatchback parked outside your block and a kid in the crèche. However that doesn't impress self-centred young backpackers, so let's get on with the serious business of quantifying what remains to distinguish rodinata, or fatherland, from any other poorman's- Belgium with extra shopping malls.

In 1999, setting foot in Sofia was a frightening experience for the uninitiated. Arriving at night on a delayed Balkan Airlines flight, you were likely to emerge from the airport buffeted by burly taxi drivers until you decided that none seemed trustworthy and you picked one at random. Refusing to take you to the Hotel Edna Zvezda in your guidebook, he drives you consecutively to the Sheraton, and other topend hotels until you hand him a thick enough wad of old and new leva simply to go away and leave you on the street. The stray dogs might or might not be on hand to tell you it's time to throw yourself upon the mercy of another taxi driver. And the old Sofia bus station? Well, at least it was indicative of where you had to go. Away from Sofia! The point of this is to say that the arrival experience is now infinitely more civilised and pleasant. The backpacker does not care who benefits from the OK Supertrans (with or without the dots) monopoly at the airport taxi rank so long as the meters work and you get where you're going. This gives the present-day an early lead in our little comparison. It’s 1-0 to Bulgaria in 2009. 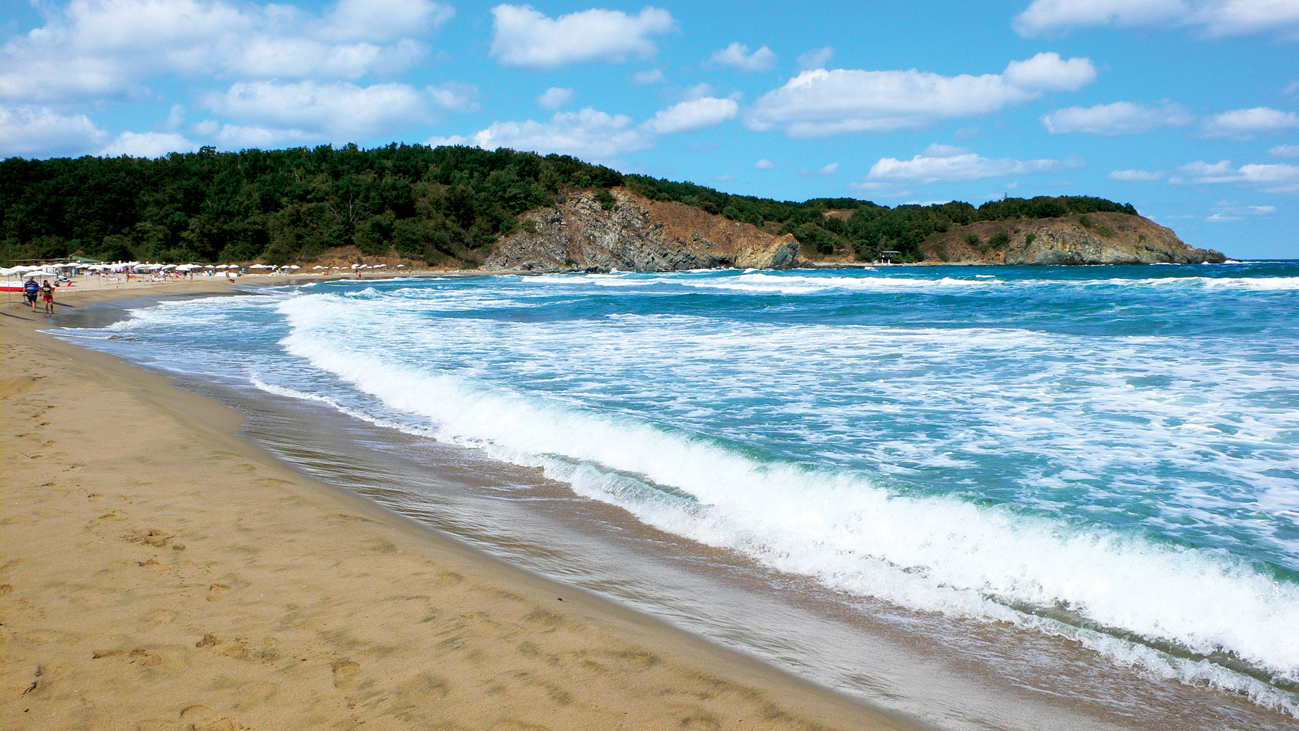 Like Bulgarians, wily travellers would find a way to experience some of the country's natural beauty. Perhaps more extraordinary than the nature itself was the accessibility of that nature by means of the wonderful wonderful BDZh rail network, plentiful buses at cheap prices and the institution of the hizha, or mountain chalet. In this regard, 2009 Bulgaria performs almost equally as well as it always did. The BDZh still hasn't decided to charge you 10 times the normal fare for buying a ticket on the day of travel – you Bulgarians can look forward to the death of spontaneous living when that happens. Bus services are definitely getting a little less frequent as you get used to your cars, but are still fairly affordable and comprehensive. And if you think hizhas are not so special, try staying on the upper slopes of the Alps for the price of a couple of boxes of cigarettes. Notice how some of the hizhas are unmanned or even abandoned these days. 1999 takes this round. 1-1.

It would be prudish not to admit that many male backpackers used to enjoy ogling the pretty ladies here in Bulgaria. Of course, the girls do still dress glamourously, but I truly believe it was all more fun in the old days. A little story will suffice. Escaping Sofia by train that summer in 1999, I sat in the sociable, conversation-inducing compartment of a train heading to the Black Sea. There was myself, a fellow backpacker, two Bulgarian fellows in vests and an ample-breasted woman in her 20s wearing a cropped T-shirt that had a gap of some six or seven centimetres in the middle that was held together by something like a shoelace. Without a bra. What stunned me and my friend was not so much that somebody travelling alone on a train would wear something I would only expect to see in a display window in Amsterdam. It was that the guys opposite seemed to regard it as very normal, chatting merrily and playing cards with her. The Catholic schoolboy in me was glad to find that this was not an isolated incident. Not only would girls wear such things, but it was all carried off with such a casual villagey charm. Fast forward to 2009 and she's wearing whatever MTV decides is sexy and is sitting in the passenger seat of somebody’s 4WD. Sex has not just been commercialised but has been sold to you at 33 percent annual interest with compulsory insurance payments. It's certainly not much fun for your average sweaty backpacker. 3-1 to 1999.

Visas. Border bribes. The obligation for longstayers to eat a sandwich on the other side of the Greek border every month for a new passport stamp. Yes, your EU membership benefits my kind too, so 2009 narrows the deficit to 3-2.

Bulgarian capitalism used to be a strange and particular beast. Behind those faded-to-orange Coca-Cola boards that seemed to have been there since the split second Zhivkov left office there were a million tiny little businesses all getting by somehow. Middle-aged women on backstreets selling Swedish second-hand clothes by the kilogramme. Old guys fixing your shoes, making them good for one more season. Burza zakuska, the Bulgarian version of fast food, everywhere! "How much is that banitsa? Just kidding, I know it's 20 stotinki everywhere." Try walking in any direction in Sofia now and you'll be lucky if you find a banitsa in the first two miles. And my God... Where have all the gevretsi, or Bulgarian pretzels, gone? Instead, they've been squeezed out by yet another corporation. Speaking of corporations, what's with these cinema multiplexes? So we had about three "cultural centre'"-type cinemas in the centre of a town like Stara Zagora or Varna. Watching a movie cost between 2 and 4 leva. Then a multiplex opens miles out of town, charges 8 leva per film (Sex Drive or Ice Age 3 because non- American films seem to be banned) and in spite of the new cinema being almost empty, it's apparently so "successful" that all the other cinemas close down. Something tells me that there's more than just market forces going on here. And whatever's happening is very nice for Austrian and German chain stores that set up in such car-friendly out-of-town locations and very bad for town centres that are becoming more and more devoid of people. Today's 18-year-olds are at the beginning of the 1990s generation that didn't get born in Bulgaria's demographic crisis, so look forward to a desert za peshehodtsi, or pedestrians only, in your town centre. 4-2 to 1999.

So my verdict – admittedly a very biased and personal one – suggests that Bulgaria a decade ago was, on balance, more rewarding for the backpacker-type tourist from Western Europe, even if it was less user-friendly in the sense that you had more chance of being fleeced by taxi drivers or messed about by the police regarding visas. A lot of the movement towards "European" standards and away from the abominations of dancing bears, Turkish toilets, mutri and visa problems has obviously been progress in the right direction. But I feel that, through my foreign eyes, Bulgaria is beginning to lose much of what allowed the hardy traveller to feel that they were experiencing something of a different order to what they were used to.

When Progress Catches Up With You…

In 1938 George Orwell wrote a novel called Coming Up For Air, in which the main character tried to escape from the artificial, commercialised landscape of 1930's England by going back to the village where he'd spent his childhood in the 1900s. He was extremely nostalgic for the England of his childhood, even though he admitted that people were poorer, worked harder and "died more painfully." Finally, arriving at the site of his childhood village, he finds that it has been swallowed up by a huge new town built by a corporation. The hidden lake in the woods where he used to fish has become a rubbish dump. The "real England" – where people knew each other’s names and you could catch huge fish in forgotten ponds – has gone.

When I actually lived Bulgaria, I grudgingly acknowledged that it was a good thing that this country had come to be recognised as a safe place for foreign investment, and yet I still held out some hope that it would develop along a capitalist path that did not simply throw away the social advantages it held in comparison to the Western patterns of routine and consumption. People still do, on balance, have more time for each other than they do in England or, I'm sure, America. But the general movement for successful Bulgarians seems to be a sprint at breakneck speed towards a suburban American lifestyle that revolves around depersonalised areas like out-of-town shopping centres and the inside of a car. This is dictated partly by the fact that people have the income to buy cars – good – but also by the lack of regulation that has allowed big business to dictate and homogenise people's lives in a way that suits them – a much purer form of capitalism than that in Western Europe or even America, where corporate interests can be forcefully challenged by local planning authorities, national parks or regulatory bodies. Bad memories of Socialism have allowed ultra business-friendly governments of "right" and "left" to gain the support of young and middleaged voters for a long time now. It has just happened again. Through all this, people’s lives have steadily improved – neither 1999, 1989, nor 1979 can seriously be regarded as a golden past. But maybe it's time to consider what might be worth keeping before this country becomes that poor man's Belgium.