There's a famous joke about a British tourist in Paris who, mustering his meagre schoolboy linguistic skills, ordered a citron presseé in a café. He was beginning to savour the prospect of a freshly squeezed lemon juice until the French waiter laughed and asked if he wanted a squashed car!

But this “misunderstanding” is nothing compared to the more formidable confusions in Bulgaria. Take a stroll in the popular tourist resort of Bansko, for example, and you may notice the absence of old men in the streets. There's a good explanation for this – they all appear to be on local restaurants' menus instead! That's right – “Old Man from Bansko” is just one of the delicacies on offer.

Do not be unduly alarmed – Bulgaria is not full of aspiring Hannibal Lecters whose idea of an exquisite dinner is a pensioner's flesh served with a nice bottle of Damianitza. Neither has it sunk to the level of 1970s Uganda where dictator Idi Amin apparently killed one of his cabinet ministers and ate him with his dinner. Bulgaria may have its idiosyncrasies but, mercifully, cannibalism is not one of them. And, thankfully, Bansko's old people are not singled out for culinary persecution. So what's the explanation? It's all about a local offering that resembles a sudzhuk, or dried sausage. Nobody knows how it acquired its strange name.

Many nutritionists dream of coming up with the perfect dish – delicious, eye-catching and carrying zero calories. And Bulgaria claims the honours for inventing the fatties' dream meal. But the recipe is familiar only to three monks in an obscure Bulgarian monastery and the staff of one of the country's big restaurant chains. The miraculous dish is: “Paper Steak”. From a Western perspective, it's only logical: Eastern Europe invented a paper car, called “Trabant”, so it seems perfectly plausible that a secret team of Communist laboratory workers housed in some underground bunker worked day and night to invent the dietary equivalent of the Holy Grail – that is steaks made of paper. Primary school level speakers of English scratch their heads and start pondering how they would like their steak – medium or rare – until the waiter sheds some light: it is not “paper” but “pepper”. So what? It's almost the same thing…

Visitors to Bulgaria may be unaware that its native dishes have distinctive characteristics. Quite literally! “Nervous Meat Balls” appear on an English language menu in a Sofia restaurant. Now, how does one go about eating those? Should you stab them with your fork or ease yourself in with a mild palliative thrust? After all, one has to take care – they may well get angry, jump off the plate and start biting! Relax. The threat is nothing but a literal translation of the nervy meat balls as Bulgarians refer to the fried balls of mince meat laced with a generous amount of red hot chilli pepper – the seasoning, not the pop group!

For the uninitiated, it takes courage – or should we say balls – to order “Balls Soup”. No, it's not what you're thinking, but merely a delicious soup with small mince-meat-and-rice balls inside. Many foreigners may have heard of the “Mystery of Bulgarian Voices”, but few suspect a possible deep and dark tale surrounding the mystery of Bulgarian cheese. Indeed, what would you think, if you came across the term: “Undercover Cheese”? No mystery here though, just white Bulgarian cheese baked with butter in a ceramic pot. Another Bulgarian restaurant menu offers a further confusing proposition to its English-speaking patrons: “Fumigated Cheese”. The process of fumigation is used to kill insects on trees or fabrics via gas or smoke. Could it be that the famous bacteria found in Bulgarian milk have achieved monstrous proportions and need to be smoked into extermination? Or is this simply a case of a Bulgarian translator trying to be clever and replacing the simple term “smoked cheese” with its not-so-appealing relative? Hopefully, the former is true.

What can we say about the kitchen linguist who, without too much thought, grabbed a dictionary, found the word “constipate” opposite the Bulgarian one he needed, and came up with the indisputable masterpiece of “Constipated Potatoes”? Just imagine the amazement of any epicurean who does not come close to suspecting that the phrase denotes the ever-popular “baked potatoes”.

Another excellent dish, sampled in a Mladost café, went by the name of “Stifled Potatoes”. Perhaps the sautéed potatoes in question – excellent I may add – suffered from delusions of grandeur and thought they deserved to be relocated to better surroundings? Or perhaps they aspired to acquiring a suitably upmarket dish – a “Paper Steak” perhaps – as an accompaniment? Either way, they were to be disappointed, disappearing down the grateful patrons' gullet before they had the chance to fulfil their potential. 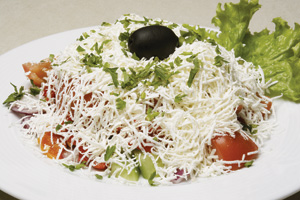 And spare a thought for the clientele of any Bulgarian restaurant that are led to believe the staff are too lazy to prepare a salad and would rather send le garçon to buy a ready-made one from a nearby supermarket. What else could they think of the “Shop's Salad” if they are unaware that the Shops are a colourful ethnic element of the Bulgarian nation and that a most delicious and popular with foreigners salad bears the same name: Shopska Salata, also known as “Shopska Salad”, “Shoppen Salad”, “Salad of the Shoppes” and “Salad a la mode du shop”?

Obviously, much is lost in translation and in the cultural differences between nations. Perhaps this is why one Varna bakery owner chose to play safe by opting for a simple transliteration rather than taking risks with translation inaccuracies: “Vinagi topli banitsi, kifli, gevretsi i mekitsi” reads his window display. Doesn't ring a bell? No, really? It means: “Hot Buns, Rolls, Pretzels and Dumplings.”