This photograph was taken by Camp Commandant Dragomir Evrov in March 1944, when 54 men were imprisoned in Camp 1. Identified are: Lt Ivan Korosa (second row, 2nd from the left); 1st Lt Julian Darlington, representative of POWs (front row, 3rd from the left); next from left to right are 1st Lt John McLendon, Lt Dragomir Evrov, and 2nd Lt Edward Tinker. In the first row, far right, is 1st Lt Thomas Judd, the initiator of the 3 June escape attempt © 289 Days Near Shumen

Bulgaria fought against Britain and the United States during the Second World War. What the pro-Nazi regime in Sofia called a "symbolic war" started on 14 December 1941. As a result, Bulgaria was bombed by the Allies, with the heaviest casualties resulting in Sofia during the raids in the winter of 1943-1944.

It remains largely unknown in Bulgaria and elsewhere that during the air battles of 1943-1944 over Bulgaria and Romania, both being subservient to the Third Reich, American and British bombers and fighters were shot down over Bulgaria and the territories occupied by the Bulgarian army. More than 200 aircrew died, and 342 were captured and became POWs. They spent the rest of the war in a now forgotten POW camp near Shumen. This September marked the 70th anniversary of the camp's closure, an event commemorated by a visit of members of the US team competing in the 2014 World Championships for Space Models.

The first 10 POWs in Bulgaria were the "result" of the first low-level raid on the Romanian city of Ploeşti and its oil refineries, on 1 August 1943. At first, they were kept in Sofia, but the heavy bombing of Sofia on 14 November 1944 persuaded the Bulgarian government to evacuate the American POWs, because of the articles of the Geneva Convention regarding prisoners of war.
Shumen, a city in the north-east, was chosen as it was far from any military targeted area. In this isolated part of Bulgaria there was only one way to gain admittance to the POW camp – by being shot down.

The camp was active for 289 days from 25 November 1943 to 8 September 1944, when Bulgaria, with the Red Army on its doorstep, declared war on Germany and found itself simultaneously at war with both sides in the conflict. On 9 September, backed by the Soviets, the Communists took power.

While the Shumen camp was operational, it was home to 329 prisoners from 11 nations. The largest group was the 291 USAF airmen, consisting of 126 officers and 165 non-commissioned servicemen. The British group was the next largest, with 16 English and Scottish RAF servicemen. One Canadian officer, five officers from the South African RAF and three Australian aviators represented the Commonwealth. Nine Yugoslav airmen from the USAF added to the diversity. Five British agents were also imprisoned – one English major, one Greek and one Serb paratrooper, plus two Dutchmen, who were also brothers.

The camp was under the supervision of Switzerland, and from January 1944 the prisoners had an elected representative whose task was to communicate with the Bulgarian military authorities and the Swiss Embassy in Sofia. 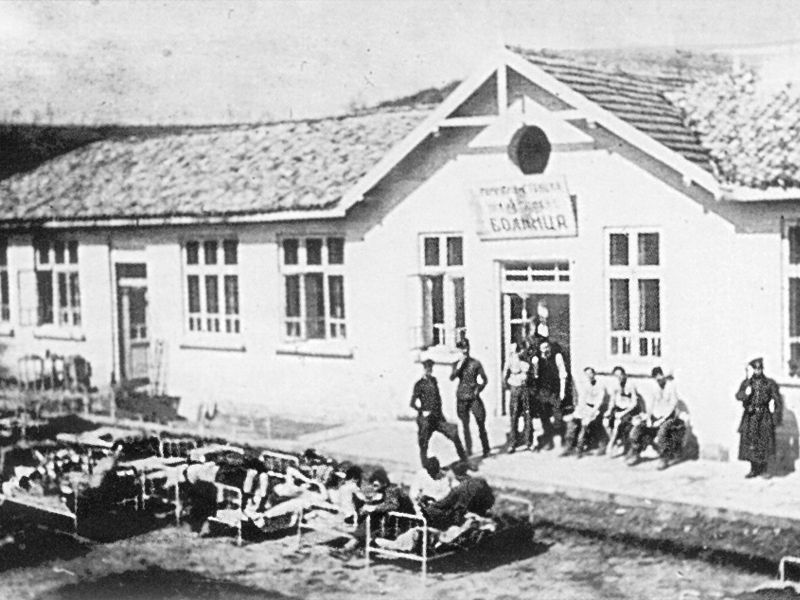 A rare photograph of the first POW Camp, dated March-April 1944. Prisoners lie outside, enjoying the sun

The first POW camp was a former military recreation house, about 8 kilometres from the city, in the village of Lozevo. This building could accommodate up to 110 prisoners, and became so overcrowded that on 13 July 1944 the camp was moved to the former barracks of the 3rd Ammunition Platoon, on the Ilchov Bair plateau. Overlooking Shumen, the plateau is now a nature park.

This building survived the war, and from 1946 to 1975 was used for military storage. In 1981 it was demolished, as the Founders of the Bulgarian State monument was being built less than 100 metres from it. 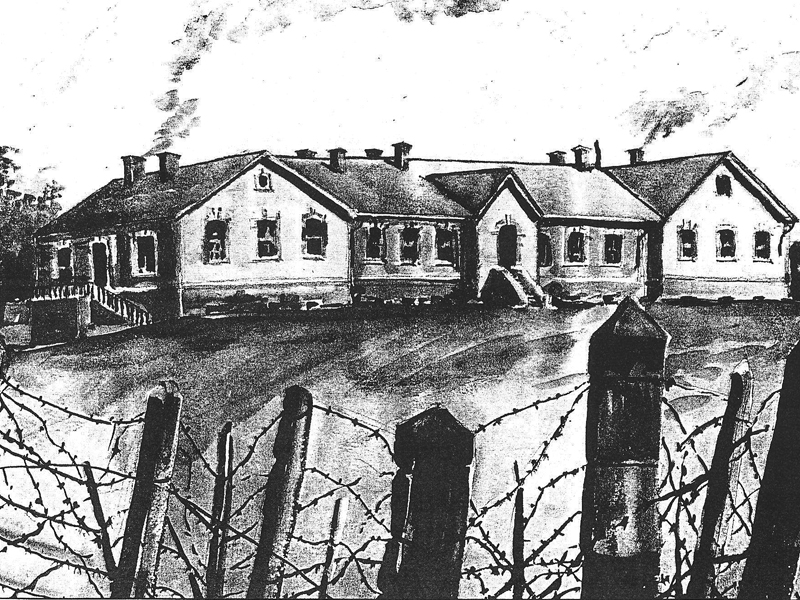 The living conditions of the POWs were tough, and reflected the poor conditions in Bulgaria in 1944. There was no electricity or running water, and hygiene was basic. The food was meagre and medical care was inadequate. Nevertheless, none of the POWs died from malnutrition or maltreatment. The military commandants of the camp did their best to follow the orders of the Shumen Garrison Commandant, Colonel Yordan Panayotov, who stated that the prisoners should be "treated as representatives of great countries." A telling example is that the food of the Bulgarian guards was the same in amount and quality as the food of the prisoners. There is also no evidence of discrimination on behalf of the Bulgarians against the POWs, whose numbers included the Native American Edward Tinker and the African American pilot Henry Wise.

The Shumen Garrison Commandant visited the POW camp once a week. While there, he would take on board the POWs' main concerns and would try to help. The POWs requested more free space for walking and sports, a kiosk for buying food and other goods, and more fresh fruit and vegetables on the menu. The camp's main problem, as in Shumen itself, was the water shortage.

While in prison, the men tried to entertain themselves. They organised performances and had a "orchestra" of guitars accompanied by self-made drums plus bottles, jugs and pans.

Life in the camp was marked by a number incidents, but most of them ended peacefully. Prisoners were constantly planning to escape, but there was only one actual attempt. It happened around 8 pm on 3 June 1944, when Americans Thomas Judd, Joseph Quigley, Patrick Meaghar and Robert Schultz sneaked under the barbed wire fence. They were spotted and soon recaptured. Their punishment was incarceration in the cellar. 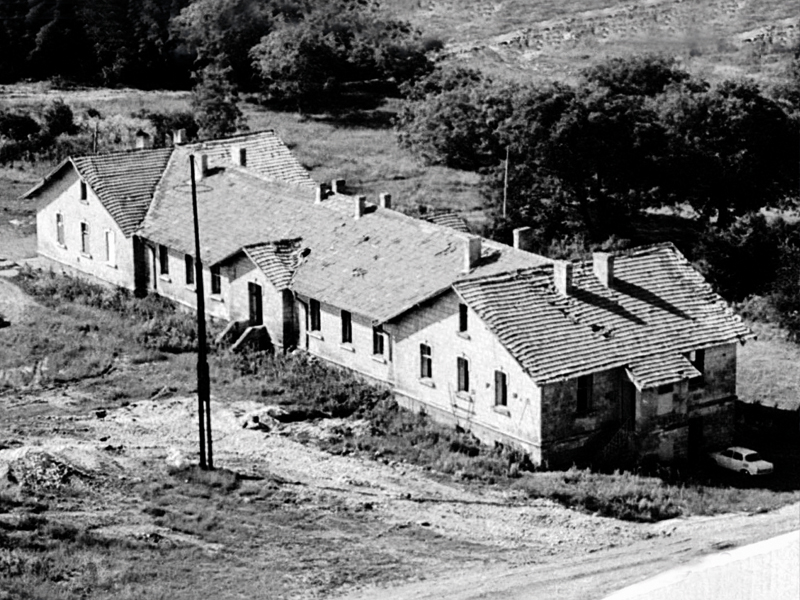 Dated June 1981, this is the last known photograph of Camp 2 before its demolition

On 8 September 1944, the Bulgarian government freed all POWs. In the late evening of the same day, a dozen trucks from the Shumen Garrison transferred the former POWs to the city railway station. At the same time, near the city park, Soviet military vehicles began to arrive. Sitting in the train, the Americans could clearly see the US trucks with Soviet insignias, but the advancing Russians never became aware that their allies were only 100 metres away.

On 9 September, at 1.45 am, the prisoners departed for Turkey.

The existence of the Shumen POW camp remains unknown to most of Shumen's citizens, and to Bulgarians in general. In 1998 a civil initiative committee was established in Shumen with the goal of researching the history of the camp. In the following years, researchers from Shumen University studied the camp archives and established contacts with former POWs. In 2004, the Committee commemorated the 60th anniversary of the release of the POWs with a series of events, including a conference and a visit to the sites of the former camps. Among the guests were Robert Johnson from Texas, a former POW in the camp, and 90-year-old Dragomir Evrov, one of the commandants of the camp known for his compassion towards the prisoners, and Bulgarian Air Force veterans who had fought in 1944.

The exhaustive work of rediscovering the past of the Shumen POWs included research in Bulgarian archives, expeditions to crash sites all over Bulgaria and the neighbouring countries, and interviews with those who were actually involved on both sides. The result of the research was the book 289 Days Near Shumen published in 2012 by Konstantin Preslavsky University Press. Both authors are personally connected to the story. Mark LaScotte is the son of a former American POW from the Shumen camp. The book sheds light on a previously unknown part of Bulgarian history and includes the first comprehensive report of all downed Allied planes in this part of the Balkans, rare photos and a complete camp roster of all the men held in Shumen. 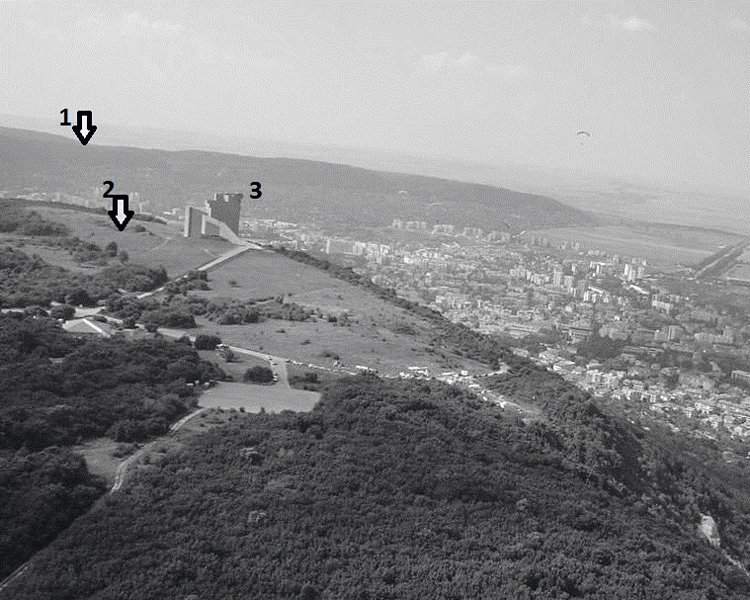 The Shumen Plateau with the location of the former camp buildings (1 and 2), and the Founders of the Bulgarian State monument (3)

Read 298 times Last modified on Monday, 10 June 2019 07:47
Published in Vagabond Features
More in this category: « WOMEN'S RIGHTS IN THE COLD WAR WHO WAS PIROGOV? »