THE RISE AND FALL OF THE BULGARIAN KEBAPCHE

© Anthony Georgieff
Ubuquitous it may be, but its contender, the kyufte, wins hands down

I am sitting in the courtyard of the unnamed eatery in the village of Leshten, on the western slopes of the Rhodope. The view before me is magnificent – the sun is setting over the Pirin, and its last rays colour in dark red the nearby mud-and-wood houses. The home-made rakiya I've tasted is probably the best in southwestern Bulgaria, the shopska has been made with hand-picked pink tomatoes, and the white cheese is simply fabulous.

A man of perhaps 80 slowly comes up the path to the restaurant. “Hi,” he says.

Half of the village, I am told by Yuri, the restaurant's owner, is now walking by. “The other half,” Yuri says, “is this man's wife.”

“Hi,” the man says again, drawing nearer. “You know what Ivan Vazov once told some folk in his native town? ‘Go to work, you good-for-nothings!' Then he went under a tree and had a beer.”

The grand old man of Bulgarian literature was indeed known for his penchant for good food and drink. The author of Under the Yoke, the 19th Century Bulgarian classic, has some unsurpassable descriptions of the Bulgar way of wining and dining. You can see in his works that in many instances his devotion to Ottoman aubergine-based stews, amply sprinkled with fresh parsley and accompanied by heady reds, mitigated his fierce anti-Turk nationalism. What the “first half of the Leshten village” is not telling me, however, is that before Ivan Vazov went to have a beer under a tree, he probably had a couple of kebapche. 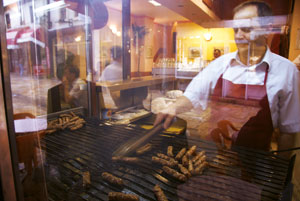 Little is known about how or when this essentially Oriental dish was imported into the Bulgarian lands. It probably arrived with the Ottomans in the 14th-15th centuries, but what is certain is that even though most Bulgarians will consider the kebapche to be one of the staples of their cuisine, it penetrated not just Bulgaria but far beyond – to the outer reaches of the Balkans and even into Italy and Austro-Hungary.

At the beginning of the 20th Century, the kebapche was the culinary craze throughout newly independent Bulgaria. Historians point out that Sofia was renowned in every part of the Balkans for its numerous kebapche stands and bars. Going out for a dozen kebapche and a few cold beers was absolutely de rigueur and was practised by the young and the old, men and women alike. They all discovered the easy way, just like Ivan Vazov, that the most appropriate drink to complement a kebapche was a cold beer. The best kebapche joints were usually associated with a brewery – First Shumenska, Second Shumenska etc. 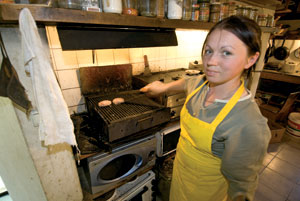 After the Second World War all the above were closed, as everything was supposed to be owned by the state. The kebapche defied the commissars, however. It quickly emerged as one of the four dishes available in state-owned Bulgarian restaurants up until 1989, the other three being its round brother, the kyufte, the pork steak and the shishche, a spike with several small pieces of meat on it. A combination of them is called meshana skara and, as it was more expensive, was considered a festive meal – several generations of Bulgarians got married on meshana skara and lyutenitsa.

The situation at the beginning of the 21st Century is, of course, completely different. Current visitors to Sofia and elsewhere can partake of sometimes extremely lengthy menus, but do note that all of them will feature kebapche and kyufte at some stage.

Many will ask, with complete justification, what makes the kebapche so different from the kyufte.

Whilst the main difference between the former and the latter is the shape (the kebapche is cylindrical, while the kyufte is, well, like a meatball), many Bulgarians will swear, hand on heart, that nothing can be further from the truth. The kyufte may include many more spices than the kebapche. Significantly, the kyufte can be either fried or grilled, while the kebapche is always grilled. Last but not least, who has heard of a good Bulgarian housewife making kebapche at home? They would always make kyufte.

Even though both the kyufte and the kebapche are genderless, psychologists claim that the kebapche is much more masculine than the kyufte. Research indicates that most Bulgarian men would choose the kebapche, whereas most women prefer the kyufte – fried for lunch, grilled for supper.

The old man in the village of Leshten has now passed me by – the weather is becoming increasingly chilly for a beer under a tree. Now I am thinking of Ivan Vazov. He will have been very happy even though he might have felt slightly sentimental for the good kebapche of old that is no longer. Yet, had he lived, his palate would have experienced a whole host of new unusual sensations. 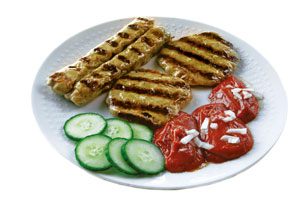 You might want to buy some minced meat in the form of either kyufte or kebapche. These are sold everywhere, from large supermarkets to corner shops. Be extremely careful as you can never know the content of the mince. Nowadays, producers are legally obliged to state, in Bulgarian, the ingredients of any foodstuff they make. You will be surprised by the number and variety of preservatives the kyufte or kebapche mince may contain, including but not limited to soya flour, E202, E316, E330, E331 and E262. Connoisseurs will immediately tell you that while these are not dangerous they inevitably ruin the taste of the real thing. Buy mince or diced meat only at reputable butchers'.

A quick look at the geographical spread of the kebapche will reveal that it is as popular in Bulgaria as it is in Romania – mititei, Serbia – cevap, Greece, Turkey and Macedonia.

The kyufte, for its part, wins hands down in terms of international popularity. What in the Arab countries is known as kofta in Iran is kofteh – köfte in Turkey, keftes in Greece, chiftea in Romania and qofte in Albania.

Beyond the Orient and the Balkans, the kyufte has become an instantly recognisable mainstay of many kitchens. Danish frikadeller are known well beyond the boundaries of the Scandinavian kingdoms. They are made of very finely ground mince and are taken with plenty of akvavit and Tuborg lager. In Finland, meatballs, or lihapullat, are made with ground beef or a mix of ground beef and pork, mixed with milk-soaked breadcrumbs and finely chopped onions. They are seasoned with white pepper and salt. Meatballs are traditionally served with gravy, boiled potatoes, lingonberry jam, and sometimes fresh pickled cucumber.

In Afghanistan, meatballs are used as a traditional dish with homemade soups and now they are also grilled on top of pizza. In Spain and Latin America, meatballs are called albóndigas, derived from the Arabic al-bunduq (meaning “hazelnut”, or, by extension, a small round object). Albóndigas are thought to have originated as a Berber or Arab dish imported to Spain during the period of Muslim rule. Spanish albóndigas can be served as an appetiser or main course, often in a tomato sauce, while Mexican albóndigas are commonly served in a soup as a light broth and vegetables.

In the United States, meatballs are often served with spaghetti as in “spaghetti and meatballs,” a fundamental dish in Italian-American cuisine. In American practice, they are usually made much larger than in Italy. Also, in Italy, meatballs are traditionally served alone instead of with pasta.

Some of the earliest known Arabic cookbooks generally identify the kyufte as being of Persian origin – seasoned lamb rolled into orange-sized balls, and glazed with egg yolk and sometimes saffron. Many regional variations exist, notable among them the unusually large Iranian Kufteh Tabrizi, having an average diameter of 20 cm. 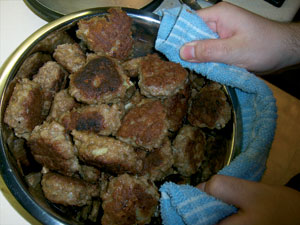 All sorts of chefs and, indeed, many people in Bulgaria will instantly produce different theories about the composition of a proper kebapche or kyufte. Some will argue that the proportion between beef and pork should be half-and-half, others will favour the addition of some mutton; the pro-mincers will clash with the pro-choppers; and the addition or omission of onions will certainly create disputes. Here is how my grandmother used to make her meatballs:

In the morning, she went out to the local butcher's and bought a kilo of a finely chopped or rough mince of 60 percent pork and 40 percent beef. She put it in a bowl, and added a couple of raw eggs, a finely chopped onion, some diced parsley, black pepper, ground cumin, perhaps some oregano and some finely chopped red chilli pepper. Then she used her hand (and hand alone – a spoon wouldn't do) to mix for 15 minutes. Once all the ingredients became viscous, she left it for the rest of the day, covered with a cloth, in a cool but not cold place “to mature.” By the evening, she started making the round balls one by one. She kept her hands always wet because the water prevented the mince from sticking to them. If she was going to fry, she rolled the meatballs in some wheat flour. If she was going to grill, she just tossed them on the grill and made sure they didn't stick to the griddle. My grandmother used to say there was nothing worse than a deformed meatball (and I listened!).

2. Kyufte, usually grilled, but can also be parzheno, or fried, which will only be served at lunch-time.

3. Nervozno kyufte, often translated in menus as "Nervous Meatball." This means a spicy kyufte, where the spiciness is derived from adding varying quantities of ground chilli pepper or even finely cut chilli peppers.

Recent additions to the Kyufte list include Pileshko kyufte, or Chicken Meatball; Tsarigradski kyuftentsa, or 'Royal City Meatballs," or small meatballs that have nothing to do with the meatballs in Istanbul and are usually served with mashed potatoes; Ribeno kyufte, or Fish Meatball; and Valcho Kyufte, "Wolf's Meatball," which can contain strange components such as chopped bacon and even liver.

Read 15338 times Last modified on Thursday, 24 March 2016 14:26
Published in Vagabond Features
More in this category: « MY OWN CHOICE: EAT AND DRINK YOUR WAY THROUGH TOWN MY OWN CHOICE: A REGULAR DINER HIGHLIGHTS SOFIA'S BEST WATERING HOLES AND RESTAURANTS »