THE BATTLE OF PLEVEN

An 1877 military victory preconditions what Bulgaria is today

If you happen to find yourself in Pleven's central square on 10 December, you might think you've stumbled into a historical film. Men in copies of 19th Century Russian, Romanian and Ottoman military uniforms pose with sabres and Berdana and Martini rifles against a backdrop of cannons and bayonets – the fence surrounding the Mausoleum, one of the city's prime tourist attractions. This re-enactment of the Ottomans' surrender to the Russians at Pleven in 1877 after a five-month siege is a set, not for a film, but for the city's traditional liberation celebrations. Even without actors and costumes, this northern Bulgarian city is full of reminders of the battles that decided the outcome of the final Russo-Turkish War.

On 24 April 1877 Russian Emperor Alexander II declared war on the Ottoman Empire. Although some accuse him of harbouring self-serving motives for invading the Balkan Peninsula, in Bulgaria the campaign is known as the War of Liberation, thanks of course to its consequences. Outside Bulgaria the conflict is often referred to as "the war between the blind and the one-eyed," due to the many strategic and tactical errors on both sides that led to extensive bloodshed, as well as to undeniable if senseless heroism on the part of Russian, Romanian, Moldovan, Finnish, Bulgarian and Turkish soldiers.

While the Ottoman leaders waited for a Russian attack on the Black Sea, the Russian army – which had been forced to destroy its Black Sea fleet as part of the Paris Treaty that ended the Crimean War – swept unchallenged towards the Danube. At the end of June, Russian troops entered Svishtov, captured the fortress at Nikopol and continued south towards Pleven. 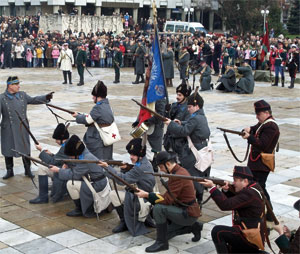 To head them off, the experienced Ottoman Field Marshal Osman Pasha set out from the fortress of Vidin with a 15,000-strong army. He arrived in Pleven just hours before the Russian troops, which provided him with time to set up defences and surprise his enemy with artillery fire and infantry attacks. The Russians' first offensive on the city, on 20 July, was a disaster, the result of poor reconnaissance.

A brilliant commander, Osman Pasha had assessed the situation wisely – the city, located in the middle of the Danube plains, was unfortified, but the surrounding hills made good natural defences. On his orders and under the leadership of English military engineers serving in the Ottoman army, his troops and the local population built redoubts and trenches on strategic locations. Also the Ottoman headquarters had sent reinforcements, and Ottoman troops in Pleven now numbered 22,000 soldiers, supplied with 58 cannons, ammunition, artillery and food. The Russian ranks grew to 26,200 troops and 140 cannons. Despite their greater numbers and better weaponry, the Russians failed in their second attack due to the enemy's good positioning and their own inaccurate maps and poor coordination.

Osman Pasha, however, was unable to take advantage of this victory and break the siege – instead of receiving permission to counterattack, Ottoman headquarters ordered him to keep repelling Russian assaults. He also got bad news from Stara Zagora – Suleiman Pasha's army of 40,000, which had been dispatched to help the besieged Turkish forces in Pleven, had been decimated by Gen. Gurko's much smaller army.

By the end of August, Pleven had become the sorest spot along the entire front. The Ottoman army's failures inspired the Russian leadership to organise a third assault on the city. Both sides feverishly prepared for the attack – after the arrival of 35,000 Romanian troops the Russian forces swelled to 83,000 men and 424 cannons. The Turkish army reinforced its defences and built new redoubts, while its ranks grew to 34,000 soldiers and 72 cannons.

On 11 September Russian and Romanian troops attacked the city in three places. They lost the first battle due to the lack of timely reinforcement. The initial success of the second assault quickly disintegrated into a fiasco – the Romanian detachments didn't know that the Turkish redoubts had been built in several rows: They captured the first line of defences but were unprepared to come under fire from the second line. The third attack under the command of Gen. Mikhail Skobelev – famous for his legendary if reckless bravery – captured the strong Turkish fortifications at Kovanlak and Issa Aga. His victory was decisive, yet due to the high number of casualties, the general asked for reinforcements. His request was unexpectedly refused and he was forced to retreat. In 1898 that battlefield, knownas the Valley of Death, was transformed into Skobelev Park, one of Pleven's many memorials to the war's victims and the bravery of the Russian and Romanian soldiers. The epic third assault on Pleven is also the main theme of the Pleven Panorama, a round memorial building located in the park. And with good reason – these battles were the bloodiest in the entire history of the 1877–1878 Russo-Turkish War. 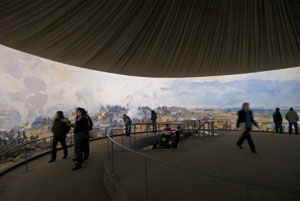 The huge number of Russian and Romanian casualties raises the question of why such a sacrifice was necessary and who was responsible for the poorly coordinated strategy for capturing the city. Emperor Alexander II's son, the future Alexander III, was commander of one detachment during the third assault. He wrote the following letter to his father: "Do you realise, Your Majesty, that you will have to answer before the Russian people and before God for this pointless bloodshed?"

At the same time, the European press and public followed the "Plevna Delay" with fascination – Osman Pasha and his widely outnumbered forces beat back offensives and thwarted the enemy's plans. Could it be that this success was due not only to the general's skilful defence, but also to his use of rapid-firing Winchesters?

The growing number of Russian casualties in the three unsuccessful assaults on Pleven forced Russian commanders to change their tactics from open attacks to a blockade of the city. Gen. Eduard Totleben – a Russian military engineer, specialist in battlefield fortifications and excellent strategist – was assigned the task. It was only then that the Russian army – which at that point numbered 63,000 infantry, 9,000 cavalry and 389 cannons – began to build dugouts, trenches and redoubts for artillery, cutting off all the Ottoman army's supply and communication lines.

The most important supply artery was the Sofia Highway, which Osman Pasha guarded with three fortifications in the villages of Dolni Dabnik, Gorni Dabnik and Telish. Russian forces led by Gen. Gurko wonthe battle near Gorni Dabnik, but at the cost of many Russian, Finnish, Romanian, Norwegian and Swedish lives.

Although small in scale, the Battle of Gorni Dabnik was a turning point in the war. Telish was soon captured, which sealed the full blockade of Pleven. The only thing the Russian army had to do now was wait – time was on their side. Gen. Totleben himself admitted – "It wasn't I who defeated Osman Pasha, it was hunger." The Turkish army's supplies diminished, and the cold snowy winter made their situation more miserable. Their lack of information about the war's progress, compounded by epidemics, killed morale and led to desertions. 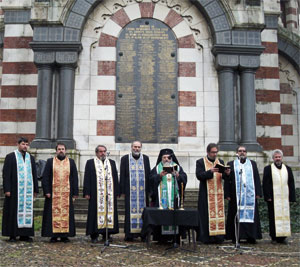 Osman Pasha requested permission to abandon the city, but Ottoman headquarters refused. After three months under siege, he was forced to take action. In the early morning on 28 November – 10 December (NS) – his forces attempted to break the blockade and to retreat towards Sofia. In the Vit River valley they were cut off by Gen. Ganetski's forces. In the subsequent battle Osman Pasha's chestnut horse was killed and the commander suffered a bullet wound to the leg. In the early afternoon an Ottoman envoy crossed the bridge blindfolded carrying a white banner of truce. The Russians took 40,000 Ottoman troops captive, including Osman Pasha himself, along with 10 other pashas, 128 staff officers and 77 cannons.

The fall of Pleven was a key moment in the war – the numerous Russian troops bogged down with the siege were now free to move south, where they won the battle at Sheynovo, which quickly led to the war's conclusion. A month and a half after the capture of Pleven the Ottoman government opened negotiations with Russia and on 3 March 1878, at San Stefano, a preliminary peace treaty was signed.

Even if you miss the historical re-enactments on 10 December, you can still see plenty of memorials to these events any time you visit Pleven. Just look for monuments surrounded by the stylised fences made of cannons and bayonets.

Accounts vary, but an estimated 40,000 Russians, Romanians and Bulgarians died in the Pleven battles. Their bones were placed in numerous mausoleums and ossuaries that can still be seen in and around the modern town. A little known fact is that most of the tens of thousands Ottomans who were killed in action were buried in mass graves. They were later dug up and sold to a British firm to be turned into fertiliser for English agriculture.

Read 48130 times Last modified on Thursday, 24 March 2016 14:27
Published in Vagabond Features
More in this category: « FROM THE FIRST ROOM WINDOW GOLFERS WITH A CAUSE »