Love it or hate it, call it a cliché, but Communism, with its mentality and its ways of organising society and the economy, still defines modern Bulgaria and Vagabond has been investigating this since its first issues. Funnily enough, the stories about Communism and its remains are regularly some of the most read pieces on www.vagabond.bg.

In Communist Bulgaria public signs combined the ideas of urging people to do things deemed good for them and preventing them from doing other things considered dangerous or unhealthy. To put it another way, they taught people how to live and behave in the new, Socialist society, although those who created these instructions were often somewhat heavy-handed where the choice of words was concerned. 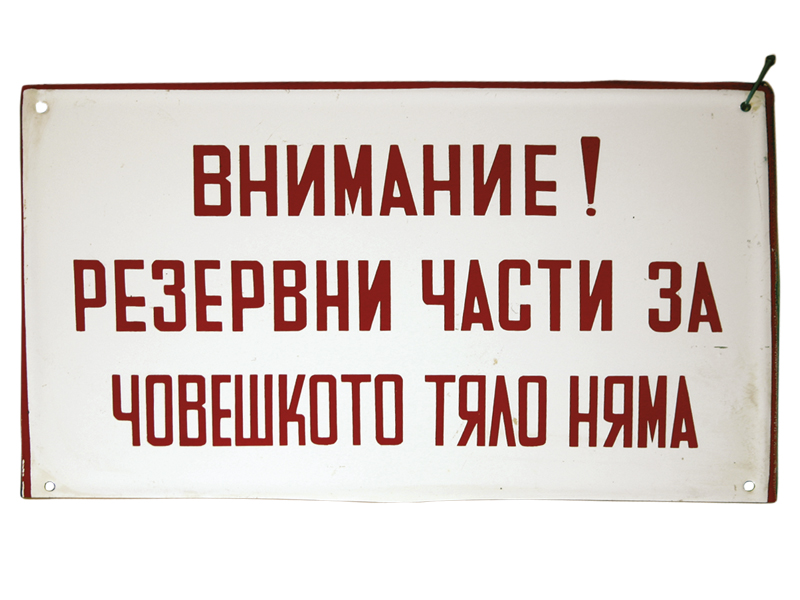 ATTENTION! THERE ARE NO SPARE PARTS FOR THE HUMAN BODY

This was how signs like CLEANLINESS BRINGS HEALTH. HEALTH IS HAPPINESS, or PEDESTRIANS! MOVE ONLY ALONG THE RIGHT-HAND SIDE OF THE SIDEWALKS IN THE DIRECTION OF YOUR MOVEMENT! came into being. For more Socialist style instructions, go to issue 91 of Vagabond.

BELENE, THE ISLAND OF HORRORS
Nostalgia for Communism, when jobs were secure and each family had a guaranteed two-week holiday at the seaside, is rife in modern Bulgaria. But the regime was hard on those who opposed it, and the prison for political opponents on the Danube island of Belene was one of its most monstrous creations. 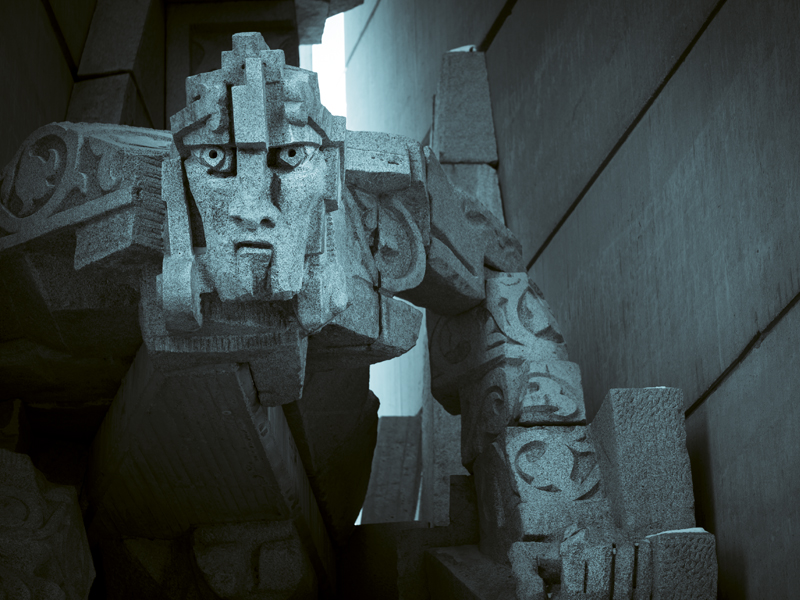 One of the megalomaniacal projects with which Bulgaria, already deep in debt, celebrated the 1,300th anniversary of its founding, was the giant concrete complex dedicated to its first rulers, on the Shumen Plateau. The modernistic sculptures of khans are still fascinating to foreign tourists, but for the wrong reasons. To the Western eye, their cyberpunk features could have come straight out of a sci-fi animation movie. 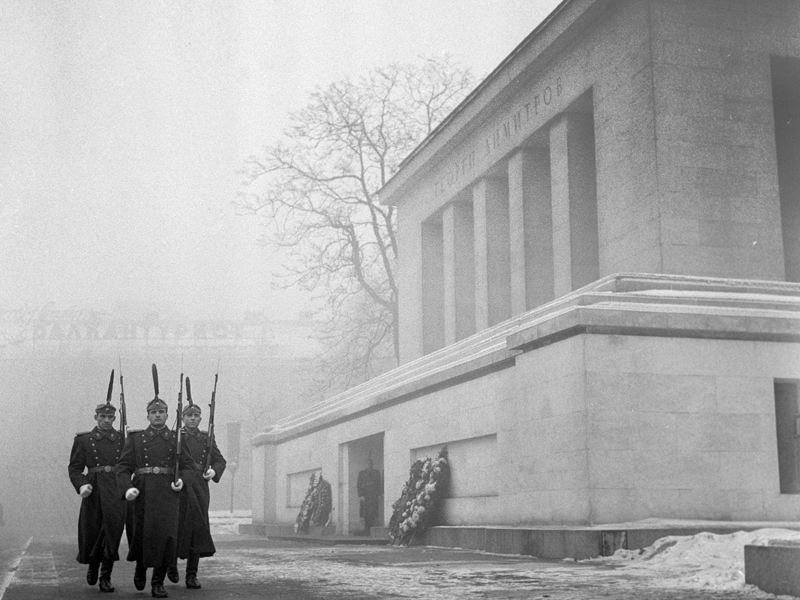 The garden in front of the National Art Gallery in Sofia is now a drab spot where cars park and youngsters drink beer; a nuisance for the city council who is stuck with the task of creating something meaningful out of this place. Until 1999, however, here rose the squat, white mausoleum containing the embalmed remains of Dimitrov, Bulgaria's first Stalinist dictator.

VICTIMS OF COMMUNISM
An estimated 300,000 people suffered in Bulgaria because of their political views. Seen as enemies of the regime, they were killed, tortured, imprisoned, resettled and denied proper education or careers. Yet, the monuments dedicated to the victims of Communism are surprisingly few. 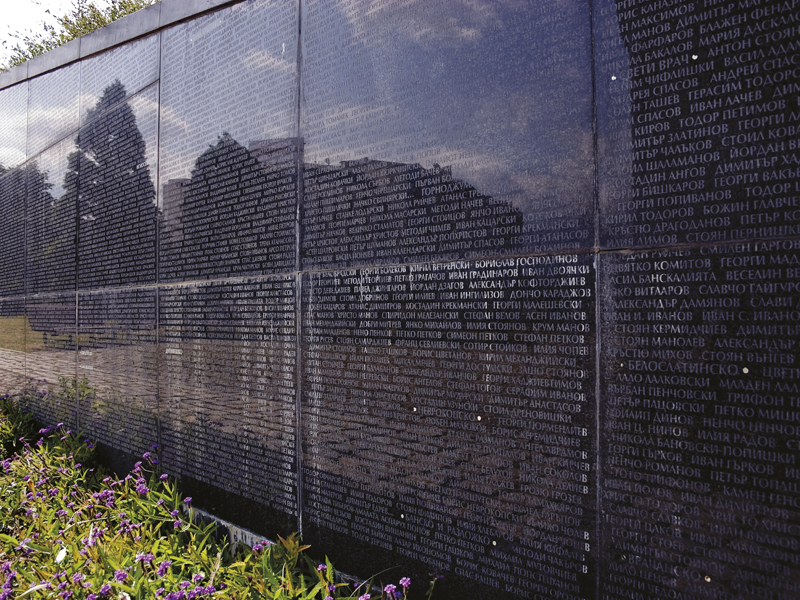 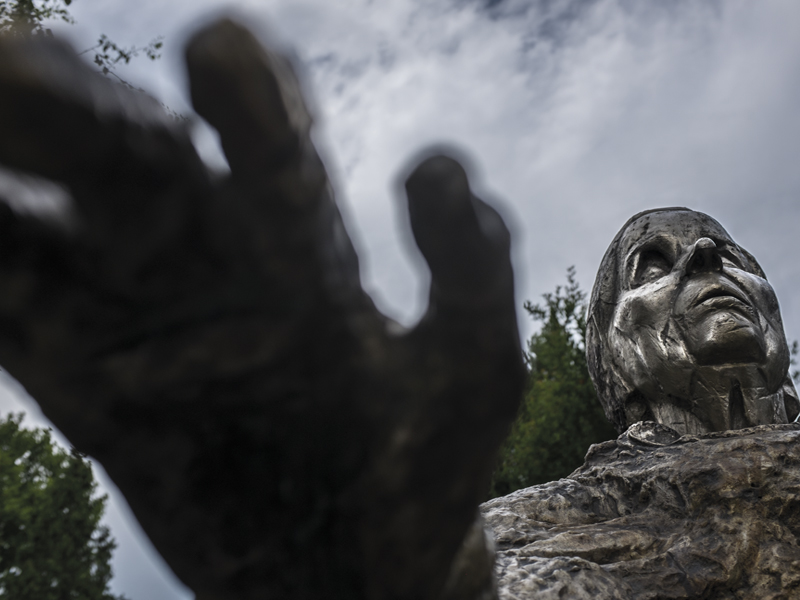 SOCIALIST MYSTICISM
Officially, Communist Bulgaria was an atheist state and superstitions didn't have any place in it. In practice, however, superstition flourished, fed by the lack of a proper religious life and a disbelief in anything the state said. Vanga, the blind clairvoyant who lived in Petrich, is the epitome of this trend. In her lifetime, she attracted thousands of visitors, including top Communist functionaries, and the attention of State Security. She died in 1996, but still enjoys huge popularity. Vagabond has covered Vanga extensively, from the secret 1981 excavations in the Strandzha supposedly inspired by her, to her house which is now a museum, and to her life, predictions and abode at Rupite (here and here). 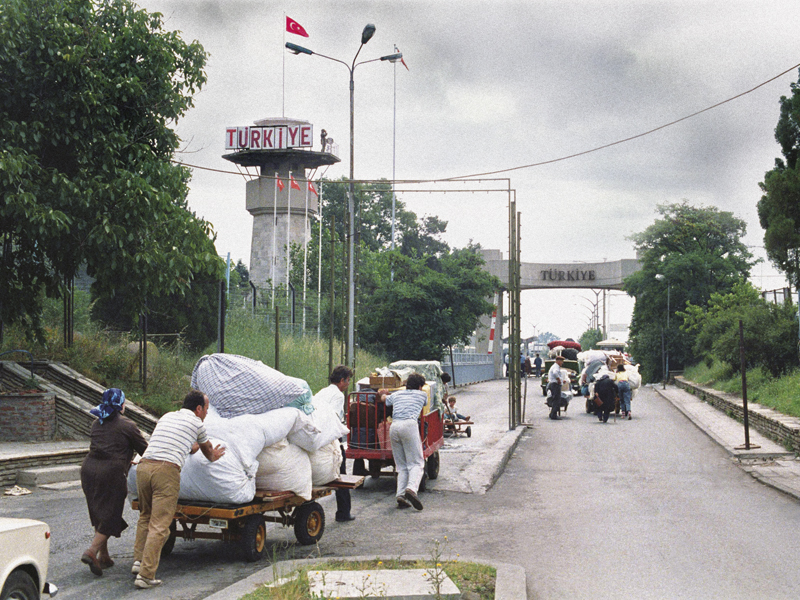 One of the biggest crimes of the Communist regime was its policies against the Muslims and Turks in Bulgaria. These culminated in the forcible name-changing of Pomaks, in the 1960s and the 1970s, followed by the renaming of about 850,000 Turks, in the winter of 1984-1985. By renaming we mean it literally: Hassans were forced, sometimes at gunpoint, to rename themselves to Asens... Many weren't happy with this, resulting in demonstrations, the formation of a clandestine resistance movement, as well as several terrorist attacks. In the summer of 1989, the Communist government issued exit visas to the Bulgarian Turks, and the mass hysteria forced about 360,000 of them to join the so-called Big Excursion, and leave for Turkey. This event is now considered the biggest forced migration in post-war Europe.

BRIGADES
The economy of Socialist Bulgaria was in constant need of labour. Initially, workers were needed for big infrastructure projects, such as building dams, road passes and whole cities, like Dimitrovgrad. From the 1960s onwards, however, the so-called brigades became the summertime activity for students in highschools and universities, who helped on farms picking tomatoes, apples or peppers. More on this Bulgarian invention in issue 34. 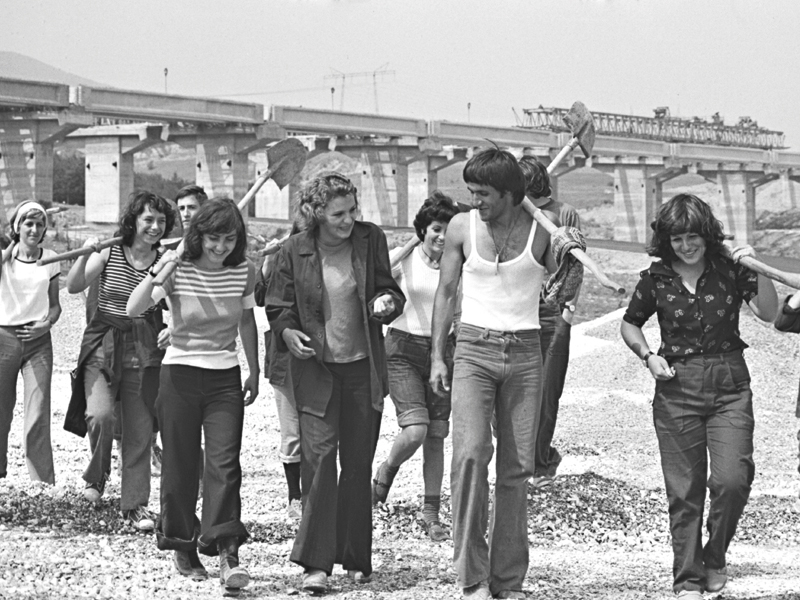 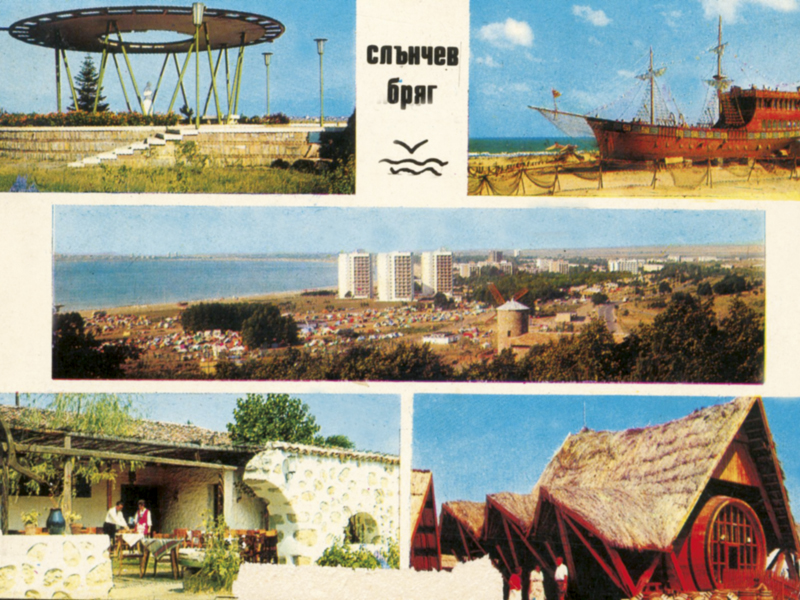 FOREIGN TOURIST IN SOCIALIST BULGARIA
In the 1970s, Bill Bryson almost had his pair of jeans removed in broad daylight in central Sofia by a young Bulgarian who was too eager to acquire a piece of original Western clothing. The visitors from Socialist East Germany, however, experienced Bulgaria and the Black Sea in a completely different manner. A series of postcards sent to their relatives show their fascination with the Bulgarian sea, climate and fruit, and their hopes of buying a decent rope here. 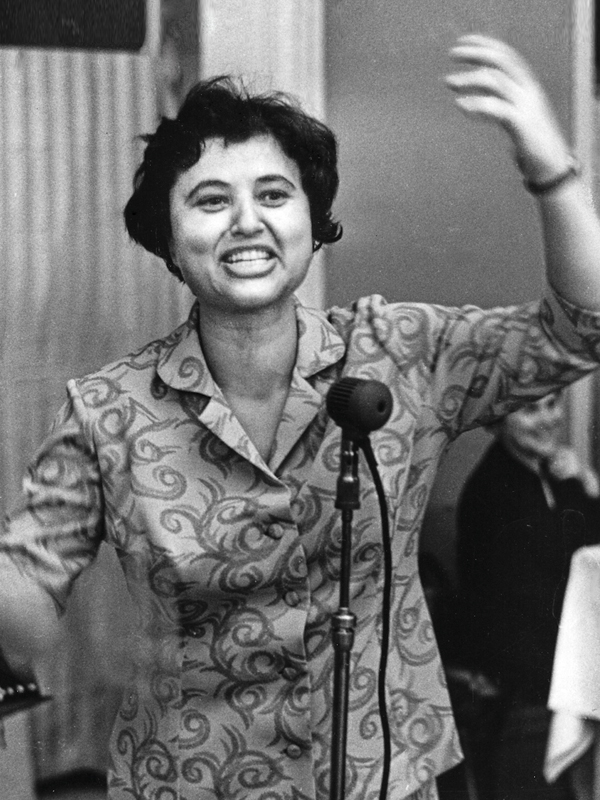 The empowerment of women is probably the best thing Socialism did for Bulgaria, and American anthropologist Kristen Ghodsee's study sheds precious light on the achievements of Elena Lagadinova, the star of Bulgarian emancipation.

FORGOTTEN ADVERTS
It may be hard to believe, but the most read article on www.vagabond.bg is Stop! Attention! Cross!, devoted to the Socialist roadside signs. The item in question has been read more than 90,000 times since its publication in 2010. Go figure. 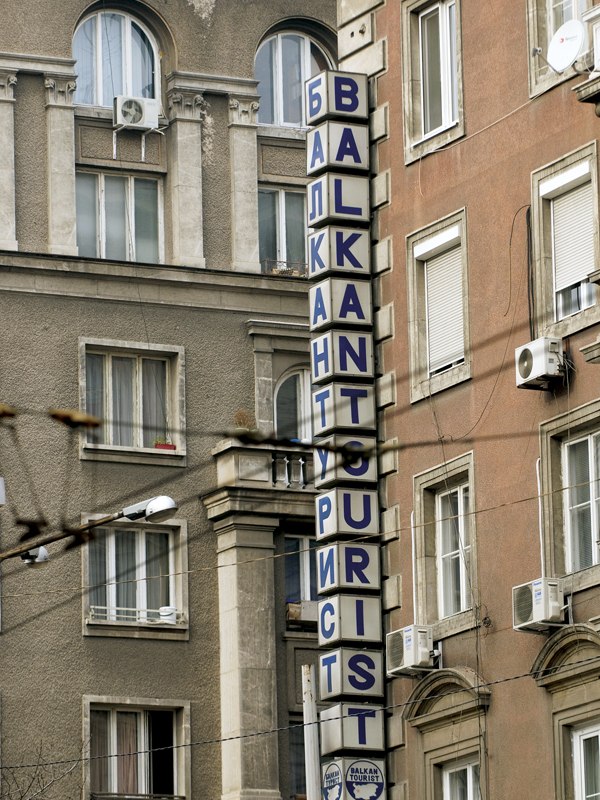 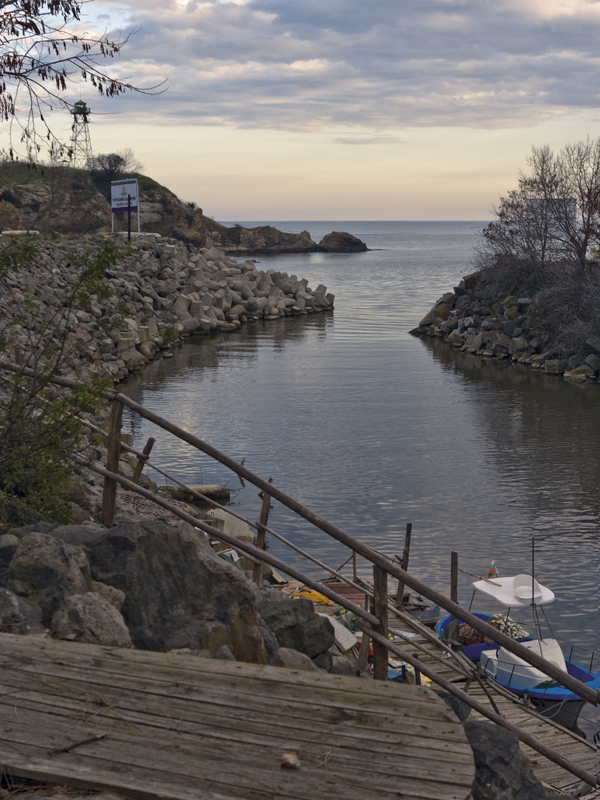 KILLING BORDERS
Under Socialism, many people from the Eastern bloc escaped or tried to escape to the West through Bulgaria. Many were captured and/or killed by Bulgarian border guards, and buried in unmarked graves on the spot. 2014 saw a surge of interest in Bulgaria in these stories, but Vagabond has been reporting on them for quite a long time. We published an article on the investigation of East German deaths on the Bulgarian border as early as 2007, in issue 15/16, and in issue 77 we had a detailed feature on Bulgaria's borders during and after Communism. 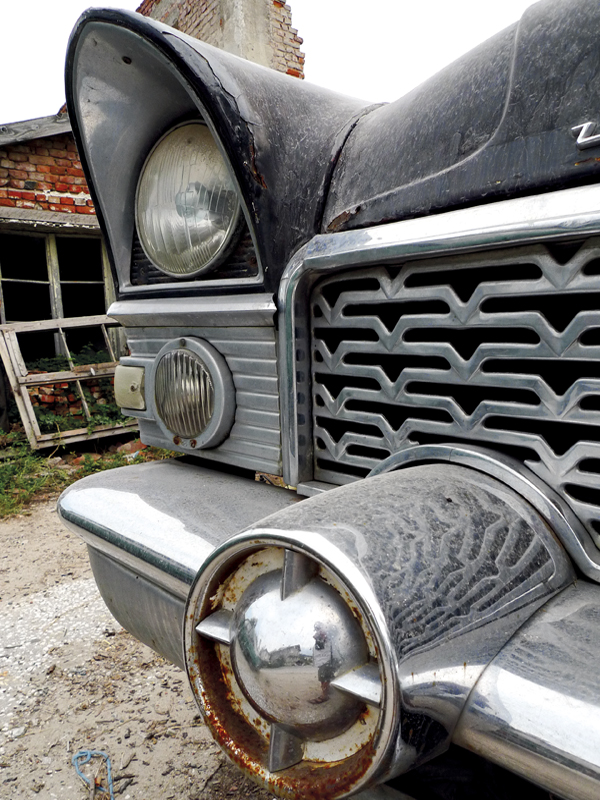 Chaika, the choice of Communist dignitaries at the time

Second and third-hand Opels, Fords and Renaults dominate the roads of modern Bulgaria, but here and there you can still see the odd Lada, Moskvich or Zhiguli, alive and whirring along the road. In issue 51/52 we included the most prominent Socialist car models, from the luxurious Chaikas to the despised Trabants.

COMMUNISM'S FLYING SAUCER
Thanks to the Internet and the countless Top-10-Derelict-Buildings-To-See-Before-You-Die lists, Bulgaria's entry is increasingly gaining attention. The monument-cum-convention centre at Buzludzha was built to commemorate the founding of the Bulgarian Communist Party, but is now in a severe state of disrepair, a treat for all those interested in urban decay and the follies of failed totalitarian states. 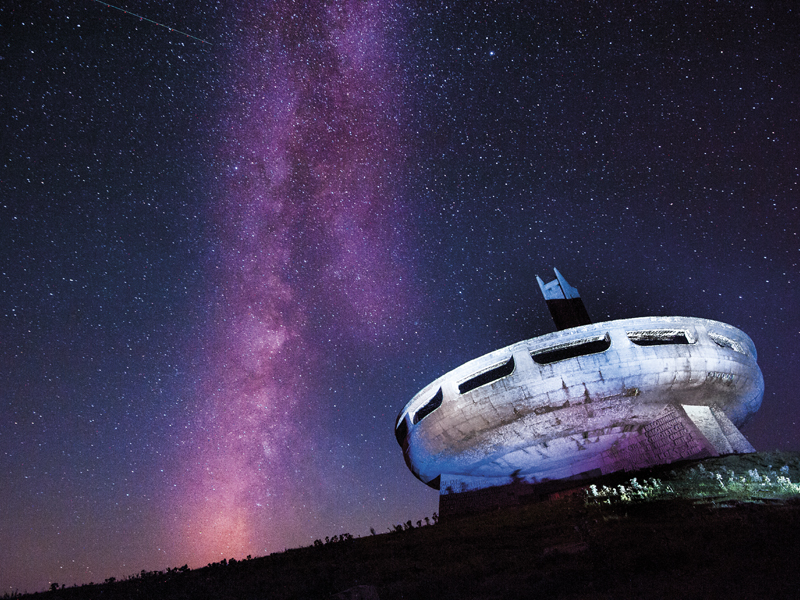 THE THICK RED LINE
Monuments of Red Army soldiers and Bulgarian Communist partisans were essential for the government between 1944 and 1989. They popped up everywhere, from the centre of Sofia to unremarkable sites in the country which had witnessed clashes between guerrillas and the police during the Second World War, reminding the obedient population to whom they should be grateful for their happy Socialist lives. Unlike other former Communist states, Bulgaria has preserved most of these monuments. 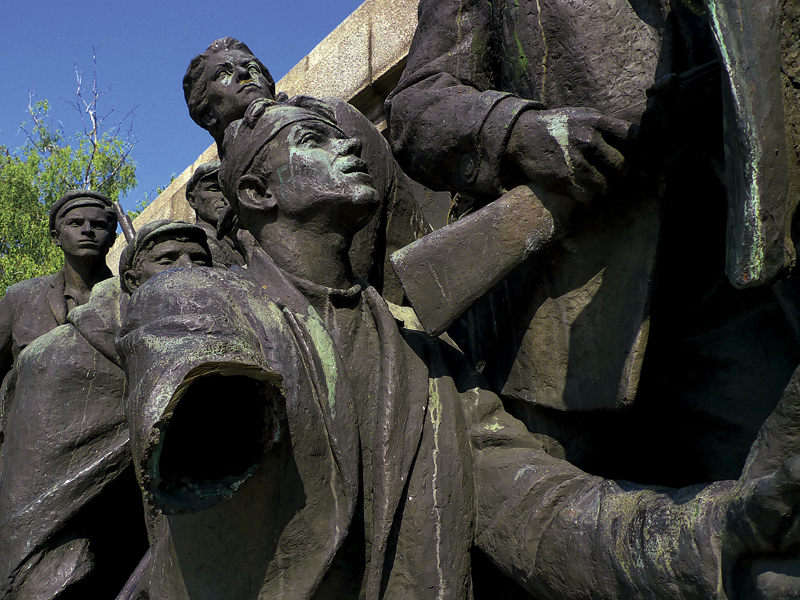