Whenever there is an anniversary of any kind, there is an outpouring of platitudes. As you know very well in the course of the past eight years, this journal has always avoided sweet-talk and commonplaces. We have tried, with the kind of resources we have had, not to take anything for granted, to pose uneasy questions and to demand straightforward answers. This has applied to everything – from politicians to ambassadors, from artists to inanimate objects such as Bulgarian Orthodox churches sitting in the middle of reservoirs. This is why I thought, initially, I wouldn't be making any particular statements regarding our 100th issue.

But wait a minute, a friend said to me just as we were starting to plan our 99-100 December 2014-January 2015 normal issue. You owe it to your readers. You owe it to your sponsors and advertisers. You owe it to all those people who have laid hands on Vagabond, Bulgaria's English Magazine, since 2006. You have informed and entertained, and very rarely have you mentioned anything about yourselves. For once, he went on, you should stray from your professional routine, and make a roundup. We want to see not only what you are doing but how you've done it.

Sounds like yet another platitude, I responded – and that was the end of it.

But then I thought it over. I remembered May 2006 when we spent a few long evenings, often going into the wee hours of the following morning, jotting down ideas and making what at that time seemed to us unrealistic pipedreams. I remembered the people who took part in those early planning stages. I remembered Lucy Cooper, who is now back in England. I remembered Jane Keating, who is now in Singapore. I remembered Elena Filipova and Dimana Trankova, Vagabond Media's faithful workhorses, who have never winced from any task assigned to them and have always manifested, selflessly, their unwavering loyalty and professionalism. I remembered a few dozen other people, from Australia to the West Coast of the United States and from India to Ireland – by way of South Africa, who have at different times and in different capacities made this magazine happen. I do owe it to them. 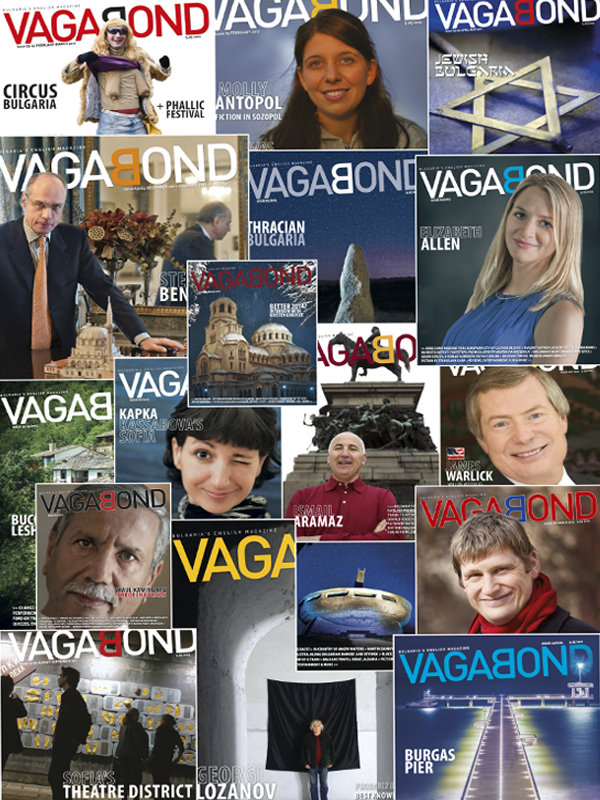 The task of painting a truthful picture of what we have done in the runup to the 100th issue of Vagabond turned out to be more daunting than putting together the editorial mix for an ordinary issue. To do that well, you need to step aside and take a look from a distance. Writers, artists and photographers are, notoriously, rarely capable of doing that.

For one, back in 2006 Bulgaria was a very different place from what it is at the moment. Optimism was in the air. The economy was doing well. In fact, it was in an unprecedented upswing. Things were yet to happen. Membership of the EU was on the horizon. Bulgarians pinned their hopes on it. They had something to look forward to. The British and the Irish were finding their place in the sun and bought holiday homes anywhere from Bansko to Sunny Beach and from Veliko to Malko Tarnovo. The political picture was also markedly different. People thought that Bulgaria had finally kissed Communism goodbye and was on the steady road toward democracy and market economy. 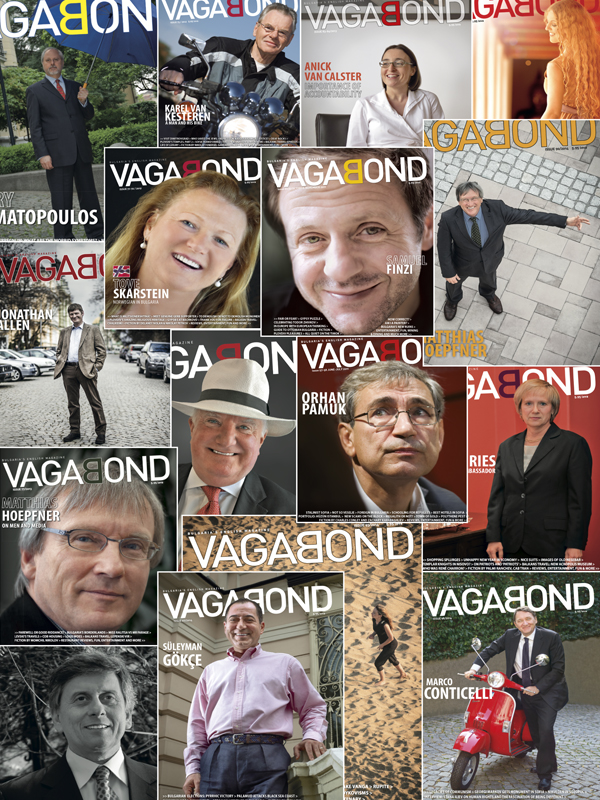 Against this background, we started with a very clear idea: never have anything to do with any kind of government agency. We wanted to model Vagabond on how most other media were produced in Western Europe and the United States. Completely independent financially of anything but advertising revenue.

Things started changing markedly when the economic crisis reached Bulgaria, which coincided with the installation of a new government in Sofia. One of the ironies of life in Bulgaria is that the man who unashamedly spearheaded this new government, giving himself a free hand in anything from the opening of kindergartens to chartering government airplanes for neighbourhood soccer club matches – but doing nothing to face up to the economic downswing – is now back as a second-term prime minister.

That's an entirely different issue and I promise that we will be bringing out much material about it in the coming months and years. What it meant for us at the time was that, out of the blue and in a manner we did not think possible in an EU country, the pressure on us was stepped up. Our sin? We were not reprinting political press releases. Instead, we chose to do our job correctly, reporting on and analysing events in an unbiased, timely, precise and I dare say intelligent manner.

At about that time we realised that Communism had not gone away at all in Bulgaria. OK, the economy was now in private hands, there were no 1 May and 9 September "spontaneous" rallies, and there were more than two newspapers on the newsstands. But the kind of Communist-era Either-You-Are-With-Us-Or-You-Are-Against-Us thinking was very much alive and kicking, under the watchful eye of the dozens if not hundreds of Stalinist Red Army monuments still dotting the country. It still is now, I'm afraid.

Bulgarians have a penchant for the past, as I'm sure you've noticed. This is healthy, as there are so many things they have yet to come to terms with, especially in the recent past. However, in more than one way it is also counterproductive. To quote one political scientist, if the Bulgarians had a unifying vision for the future, they would not be fighting wars with their past. Throughout the years, since Issue One, we have repeatedly concerned ourselves with this quite characteristic Bulgarian phenomenon. We intend to continue to do so in the future.

We also intend to continue to be intimately engaged with issues of the day that we think are very important for Bulgaria in the 2010s. One of them is nationalism, which in this country usually masquerades as "patriotism." Another is tolerance and the development of Bulgaria as a multicultural and multiethnic society, within the framework of the EU and NATO. We will not cease to take a stand against anyone who thinks a Bulgar is "better" than a Jew, a Turk is inferior, and a Gypsy is subhuman. This way of thinking, which often is used as a blanket excuse for many of the shortcomings of Bulgaria's still inchoate democracy, is plain wrong. We will bring you our arguments. 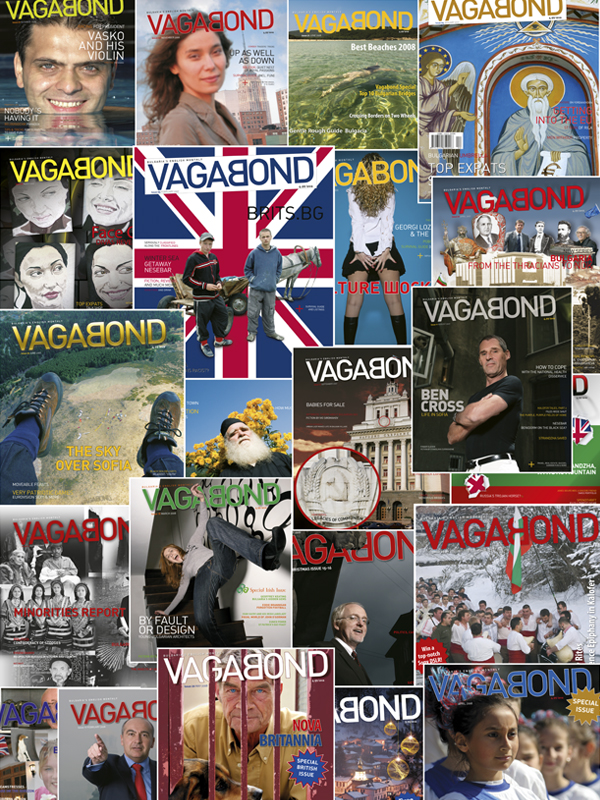 To put it another way, we will continue to do what we started doing in the first place. It is quite simple, really. We have taken it upon ourselves to explain, in plain English, what sometimes – actually more often than not – are overwhelmingly complicated affairs, events and personalities.

Apart from the people I work with, the people we have interviewed, the many known and unknown locals who have directed us to the off-off-off the-beaten-track places featured in this magazine, the people of Sofia, the people in the Balkan countries that we've covered and the Elizabeth Kostova Foundation for Creative Writing,I would also like to thank a few others.

Space prevents me from listing all our commercial advertisers throughout the years – they are in their hundreds, from small businesses to large multinational companies, from corner restaurants to huge hotels, from hole-in-the-wall real estate agents to major car sales companies. But I do want to mention a few. These are our sponsors.

First and foremost, I would like to thank the America for Bulgaria Foundation for continuing to endorse our travel pages. High Beam, perhaps the single most popular section of the magazine, brings you to places in Bulgaria that are scarcely or completely unknown but that are very interesting and worth making an effort to see. These are the places that make Bulgaria what it is. This is where Bulgaria's significant potential for cultural and heritage travel lies.

Then I would like to thank the Open Society Institute in Sofia, a major thinktank that through the years has conducted extensive research into issues of public importance, including democracy-building and minority rights. We have cooperated very closely with them.

A word of thanks also goes to the Sofia City Council – in the past, we were the recipients of grants from them to promote Sofia as a destination for cultural travel.

My biggest thanks, however, go to you. You are our readers. Without you, we could not have got anywhere.
Enjoy your Vagabond!