LET'S GO ON A BRIGADE

When in 1194 the citizens of Chartres donated their labour to dig the foundations of the new Cathedral of Our Lady, whose predecessor had burned down, they had a couple of aims in mind. The first one was purely practical. The cathedral, which housed the tunic of the Virgin Mary, attracted a host of pilgrims and their money to the city. The second was their religious enthusiasm. They worked without pay to purge themselves from sin.

Between 1946 and 1949 young people from all corners of Bulgaria also worked for free, using implements and technologies that were not much different from those of the citizens of Chartres. Naturally, in the first years after the Second World War and the 1944 Communist coup, they were not building cathedrals. In three years, the participants in the so-called Youth Brigade Movement enlarged and paved the Hainboaz Pass, known as the Pass of the Republic in those days, in the Stara Planina Mountains. They also began the construction of the Aleksandar Stamboliyski Reservoir between Gabrovo and Veliko Tarnovo and the Georgi Dimitrov (present-day Koprinka) Reservoir near Kazanlak. They built several railways and even a whole new town, Dimitrovgrad.

The working conditions were nearly mediaeval. Food was scarce, of bad quality, and meat was rare. The production goals that everybody had not only to fulfil but also to exceed – ideally by 300 percent – were completely unattainable.

What made these young people volunteer for the brigades? Propaganda songs such as "Come, You Thousands of Youths" and "The Wheat Fields Are Gleaming Before Us" broadcast on the radio or from loudspeakers at political rallies played their role. But they can't have been that persuasive. 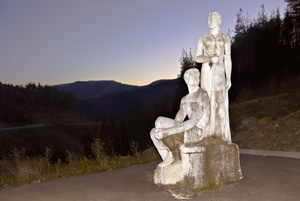 The answer depends on whom you ask. The nostalgically minded, especially those with a career in the Communist Party, claim that they volunteered for purely idealistic reasons. In their memories, they paint idyllic pictures of hard, honest toil in the daytime followed by romantic nights spent singing round campfires. The hardships experienced in the brigades, they say, honed their personalities. Most of them use the same clichés with which the newspapers described the movement 60 years ago: "a remarkable feat of our youth" or "an expression of sincere patriotism, conscience and responsibility."

However, many of the volunteers entered the movement prompted by stark pragmatism. In the first years of the "people's rule," the repression of those branded as "bourgeoisie" assumed monstrous proportions. Adults were unable to find a job or were forced to do menial work. Their children were not admitted to universities. Taking part in a brigade became one of the ways for "bourgeois" kids to increase their chance of entering a university.

In the brigade camps, there were real social climbers too. Those too young or too timid to have become partisans before 1944 viewed the brigade movement as a golden opportunity to rise in life – and took full advantage of it.

In this milieu, skilfully manipulated by the leaders, informers thrived. State Security agents mingled with the enthusiastic "builders of Socialist Bulgaria." Their task was particularly important because, while the official goal of the brigade movement was to work on "major infrastructure projects," the real aim of the movement was to convert the younger generation to the Communist lifestyle.

The timing was apt. The official beginning of the brigade movement was 5 August 1946, when more than 2,000 young people from all over Bulgaria began the construction of the Pass of the Republic under the leadership of Pencho Kubadinski, a former partisan and future cabinet minister. The enrolment of volunteers for the building of the Silistra-Samuil railway began a few days later, on 11 August.

Propaganda bore its first fruit in time for the 15 September referendum, where a stunning 95 percent of all Bulgarians voted for the replacement of the monarchy with a republic. On 27 October, in the last relatively democratic election in Bulgaria for the next 45 years, the Communists and the pro-Communist Otechestven, or Fatherland Front, coalition won 366 out of 465 seats in the parliament. The opposition parties would not take part in the next election – simply because there was no more opposition.

The ordinary Bulgarians, whose sons and daughters went to build the Georgi Dimitrov Reservoir or Dimitrovgrad, did not share their children's enthusiasm. The reason was not that the young people were prepared to work for their country for free. Bulgarians had had experience of similar initiatives. Until 1856, when the Hatt-1 Hümayun edict of the sultan declared all subjects of the Ottoman Empire equal, Bulgarian peasants were compelled to donate several days of unpaid labour in the fields or construction sites of their Ottoman lords. Of course, no one enjoyed this enforced labour. The Bulgarians still use the Turkish word for it, angariya, for any job they are forced to do for inadequate payment. After the First World War, the leftist Agrarian Party government of Alexandar Stamboliyski introduced a modern version of angariya. The so-called labour service required all young men and women to work for free for several months, mainly on construction sites, for the benefit of the state. In this way Stamboliyski intended to help Bulgaria get back on its feet and also circumvent the Treaty of Neuilly-sur- Seine, which had drastically cut the size of the Bulgarian army. 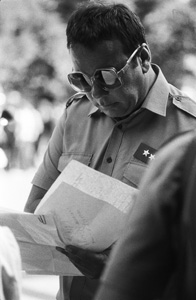 This forced labour did not last for long, because there were protests against the intervention of the state in the lives of its citizens. Nearly 30 years later, most parents were concerned with something else.

At the end of the 1940s, Bulgaria was a rural and conservative country. The idea of letting their daughters live without supervision among hundreds of young men from throughout the country caused understandable apprehension. In fact, the brigades brought about a number of marriages, as well as the first generation of Bulgarians that were born and grew up under Communism.

The propaganda was not only for domestic consumption. Foreigners also took part in the construction of the reservoirs, the Hainboaz Pass and Dimitrovgrad. Most of them came from Yugoslavia, but there were also people from the democratic West: from Britain and France to Norway and Switzerland. Pencho Kubadinski did not conceal the intentions of the Communist Party and would often say: "We've won Bulgaria a lot of friends!"

Communist Bulgaria discovered its most loyal friend in a girl from Plymouth, who studied Russian in Oxford. Mercia MacDermott came as a guest of the brigade movement in Pernik in 1947 and, the following year, took part in the construction of the Georgi Dimitrov Reservoir, that engulfed the Thracian city of Seuthopolis (see Vagabond No. 31). Mercia settled in Bulgaria in 1962 and lived in this country until 1989, writing history books that promoted the Bulgarian viewpoint on controversial issues such as Macedonia.

However, as a rule, the foreign members of the brigades were regarded as spies who had chosen a rather conspicuous cover. Any Bulgarian who tried to make friends with them had to face the Secret Service.

By 1949, the foundations of Communism in Bulgaria had been laid – both literally and metaphorically. The death of Stalinist-type dictator Georgi Dimitrov in that year did not result in a change of the status quo. The opposition was crushed. The brigade movement appeared past its prime and was relegated to the closet of history alongside other relics from the first years of Socialism. Interestingly, in 1951 it already had its own museum in Dimitrovgrad.

But only 20 years later, the state needed the brigades again. In 1970, the Central Committee of the Politburo reinstated the movement.

The new brigade movement was completely different. The brigades lasted for a month in the summer. They were mandatory for all secondary school and university students. This time they did not build reservoirs, railways or towns. Instead, they were assigned prosaic agricultural jobs. Students picked apples, peaches, tomatoes or peppers. They gathered potatoes and sometimes helped in canning factories.

The difference between the two brigade movements largely explains the changes that the Bulgarians went through between 1950 and 1970. The first brigades were established to support the industrialisation of the country, which was one of the main goals of Communism. The aim of the second was to reduce the consequences of industrialisation.

The forced collectivisation and the low wages on the state-owned farms at the end of the 1940s and the 1950s led to an increasing number of Bulgarians leaving the villages to seek employment in the cities. But the country needed food. So in 1970 the Communist Party decided to send the students to gather the crops in the depopulated countryside.

The enthusiasm of this wave of brigade members was zero. The conditions were as bad as in the 1940s and higher productivity remained equally unrewarded. The only advantage of the brigades was the chance 65 they gave to two generations of Bulgarians to experience a kind of a sexual revolution away from their parents' eyes.

Occasionally, parents went on brigades too. This happened on Sundays, their only day off, and, as a rule, involved menial work. The more intellectual the job of the brigade member, the more unpleasant drudgery he was assigned. For example, Sofianites had to dig a canal from Lake Pancharevo to Pavlovo every Sunday for years. The canal was never finished.

Ironically, in 1989, the year of the democratic changes, the brigades became a major issue that the country's future largely depended on. On 29 May dictator Todor Zhivkov officially declared that all Muslims in Bulgaria who felt unhappy about changing their names for Bulgarian ones during the so-called Revival Process of 1984- 1985 could emigrate to Turkey. 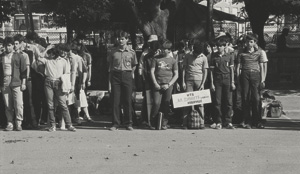 In the next few weeks, over 300,000 Bulgarian Turks left the country, for fear of potential reprisals.

Most of them had lived in rural areas and left behind crop fields, vegetable gardens and orchards where the produce was already ripe. Bulgaria was on the verge of a food crisis. For this reason, the government dispatched brigades of school and university students and soldiers to the countryside.

It seemed in the next few years that Communism had gone and so had the brigades. But in 1994 the first 200 university students left for the United States on the Work & Travel temporary employment programme. Their number has risen exponentially over the years, reaching 9,000 to 11,000 people per annum. Most of these young people go the United States or Britain, where they mainly do strawberrypicking.

These students work for cash, travel alone or in small groups and fund their own visas and tickets. Due to inertia or something else, however, their trips are also termed "brigades" in this country.

So far it remains unclear whether it was inertia too that made President Georgi Parvanov declare to nearly 1,000 former brigade members, who had come together on 22 July 2006 to mark the 60th anniversary of the movement near the village of Voneshta Voda, situated at the beginning of the Hainboaz Pass: "The timeless ideas of solidarity and collectivism cultivated by the brigade movement have to be continued."