Instead of Europe, Bulgaria increasingly finds itself in Latin America

I know this will sound like a bad joke ‒ or "rant" some might say, but I guarantee that every word of this is true. And I want to apologise to all Mexicans for drawing any comparisons between their country and Bulgaria.

Recently I had some visitors from Mexico City. Widely travelled throughout the world, well educated and with a prosperous business in Mexico, my friends wanted to visit what, in their opinion, was the least heard-of land in Europe. Bulgaria was a country that they nevertheless felt a strong emotional attachment to, as one of their predecessors had been born here, from whence he emigrated to Mexico as far back as 1929. They did not speak a word of Bulgarian and their knowledge of the country was limited to the few things their relative had lovingly told them about: the blossoming vishna, or sour cherry tree, in the yard; the taste of burekas, or banitsa, in the morning; and the smell of the turshiya, or home pickled vegetables, wafting from the basement year-round.

The trip started on a good note. As soon as my friends landed at Sofia Airport (plane on time, no lost luggage) and we got into the car on our way to town, my friends asked, "Is Sofia a safe city to walk around?"

"Most Bulgarians constantly whine about crime," I said. "But in fact, Sofia is very safe, compared to anywhere in Europe except perhaps Helsinki."

"Good," my friends replied. "In Mexico City you need a bullet-proof vest."

The differences between our way of life and theirs started and ended with the crime levels.

On the following morning we went for a walk in Central Sofia. When we got off the beaten track (a few metres away from the National Assembly and the Aleksandr Nevskiy Cathedral), I saw my friends beginning to stumble on the uneven pavements, so I warned them, apologetically, to watch out for metal and concrete objects sticking out of the paths for no obvious reason.

"Oh, don't worry," they said. "This is exactly the same in Mexico."

We walked on to the area around the Council of Ministers. On the steps behind the British Embassy, leading to Dondukov Boulevard, there sat a one-legged man who had taken off his prosthesis, considerately exposing the stump of his leg for all to see. "Give me some money," the man demanded gruffly.

My friends scurried down the stairs. The man was a Gypsy, but I refrained from describing him as such. 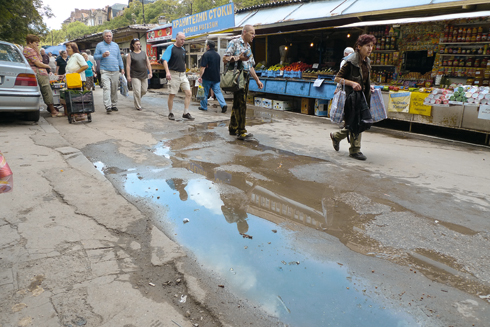 "Is he a Gypsy?" my friends asked. "No, we don't have Gypsies in Mexico, but we do have beggars all over the place. They are organised, aren't they? There is a man lurking around the corner or perhaps sitting in an office who collects a cut of their alms, isn't there? Sometimes the women drug their babies to make them look worse than they are, don't they?" my friends said.

We proceeded on to the Women's Market, carefully avoiding the packs of stray dogs barking at passers-by alongside the Council of Ministers building.

My friends recalled tales their relative had told them about the fantastic Bulgarian peppers and tomatoes, about the aromatic peaches and apricots, about the spicy green what-were-they-called, OK ‒ pimientos and, of course, about the chubritsa.

"Don't touch!" a man shouted when my friends' teenage daughter held up a tomato in her hand. "Speak!" (Kazhete!) a woman intoned when we looked at her cucumbers.

"They only sell by the kilo," I explained.

"In Mexico we also have a lot of street food stalls," my friends said as we progressed towards Lions Bridge. "But it is not always safe to buy there. The hygiene is not always good. Some sellers will sell you dog meat in their sandwiches," they said.

I said nothing. I thought, "Has Mexico run out of donkeys?"

Two days later we drove to Plovdiv. "What is Bulgaria's main road?" my friends asked.

"Not a very good one," my friends observed, as the ride became increasingly bumpy around Pazardzhik.

I said the government was very proud of the fact that it was building more roads.

Beyond one of the bends on the motorway there was a police car parked in the emergency lane. In the shade, of course.

"They use radar guns to control the speed, don't they?" my friends said. "Same in Mexico. How do they collect the fines?"

"Same as in Mexico," my friends observed.

We stopped at a service station. "Ooo, this stuff is expensive," my friends said as they looked at the pump meter. I explained in absolute terms Bulgarian petrol was the cheapest in Europe, but in relative terms - it being sold at those prices in what was Europe's poorest state - it was hideous. "Is Mexican petrol at US prices?" I inquired.

"It is cheaper than the States," my friend said. "But it should be cheaper. You know, we actually produce crude oil. But we also have clever politicians: we cannot process it. So we sell it to the States, they process it, and then they sell it back to us with a markup of course."

In the evening we wound up in a Plovdiv restaurant. "An extremely lovely city," my friends said, "but why don't the waiters bring the food for everyone at the same time?"

"Because they are serious people and they don't smile." I tried to be funny.

"Probably their tip is included in the price," my Mexican friends said. "In Mexico if you aren't happy with the service you don't leave a tip. Sometimes the waiters come running after you, with apologies."

I said it wouldn't make any difference in Bulgaria because, even if you are unhappy with the service, you still leave a tip because you've already had a few drinks and you feel mellow.

We did leave a tip that night. The Bulgarian rakiya had worked.

Later on we watched about three minutes of Bulgarian TV. We saw Prime Minister Boyko Borisov cutting a ribbon in front of some kindergarten ‒ or was it a new sports facility?

"That man looks like a gangster," my friends said. "Who is he?"

"That is the Bulgarian prime minister," I said.

"In Mexico people like that might become local politicians or even governors," my friends said. "That enables them to continue running their rackets on the side, while doing a few good things to impress the people, such as opening new kindergartens or sports facilities."

Interior Minister Tsvetan Tsvetanov featured in the next piece of news.

"In Mexico they make arrests all the time," my friends said. "The more spectacular the arrest, the bigger the credit the police get. Every day we see the police busting a criminal ring, or arresting the son of a notorious drug cartel leader, or they kick in the door of a corrupt official. In a few days we are told they made a mistake. It turned out not to have been the son of a famous drug dealer and the official had not done anything wrong," my friends said. "But the media keep us busy thinking."

"Is it because the court system is corrupt or because the police are unable to come up with proper evidence?" I asked.

"A combination of the two, usually," my friends said.

The airport was almost empty when I went to see off my Mexican friends. We sat in a bar for a final drink. The prices were outrageous and the service was grumpy, but my friends left a tip. They were beginning to understand how it works.

"It's the same in Bulgarian politics," I said in farewell. "People don't get what they pay for, but they still leave a tip. Probably because they've had too many drinks or watched too much television."