MY OWN CHOICE: STANDING THE TEST OF TIME

© Dragomir Ushev
In the easy-come-easy-go world of the restaurant business, longevity is key

"Under new management". The inference intended in this sign is that the food, service and whole ambience will be better than whatever existed before, and the sign itself illustrates the impermanence of reputations in the restaurant business. However, the places mentioned below have stood my personal test of four or five years, and hopefully will continue za godini.

One of my favourite restaurants is the Phoenicea. I can't imagine anyone not liking Lebanese food and this is the place for it in Sofia. However much you'd like to delude yourself, the building itself cannot be described as attractive, but once you're inside and eating, you don't notice any more. In a world where appearance is vaunted and often valued over content, for me this is the right way round. Beautiful decor does not flavour dishes, but wonderful food and good company render the surroundings immaterial. The most difficult task is deciding which meze to choose from the mouth-watering list, so the best solution is to go with a large group and choose a wide range. If you're not familiar with the dishes, and even if you are, I would recommend you to call Fatima beforehand or ask her when you arrive to select for you. You really cannot go wrong. 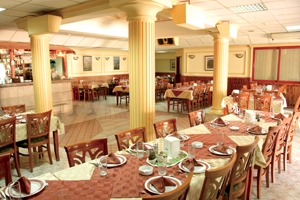 The best is to expect a group of say 15, then only 12 turn up, and you have to eat all those extra dishes. What a shame! There's a good choice of main courses and then the desserts - including lovely little baklavas, not awash with syrup, but packed with nuts, which go down so well with "white coffee" - a rose water infusion that acts as a digestif. Where is this tempting place? In Zone B5. This makes it sound like the ends of the earth, or even beyond, but actually it's just off Stamboliski, very near the new shopping mall, at 5 Osogovo St; phone: 9293641 or 0888632920.

When we first arrived in Bulgaria, we spent a month in Varna on an intensive Bulgarian language programme. We stayed in a place that was very attractive and which advertised itself using terms like "peace and tranquility", which there would have been, except for the endless children's parties for Russian tourists during the afternoons, regular evening parties during the week and wedding parties at the weekend. As at the time there was no air conditioning, we "benefited" from all the musical delights, naturally at maximum decibels, plus that of the competition - three beach discos till dawn - so by the end of the month we may have been on the slow path to understanding Bulgarian, but we were extremely ragged and short on sleep. Two days before we left we came back in the evening to find a wedding party in full flow. Well, at least that means there won't be one tomorrow night, we thought. Wrong. And no, where we stayed does not feature in My Own Choice, but the restaurant run by the couple celebrating their wedding on our last night there, does.

When we settled in Sofia, a number of people described L'Etranger as the best restaurant around at the time, with which we concurred. Since then many more restaurants have opened, but this remains one of our favourites. It's a comfortably sized bistro with a small, but inviting, menu written up on boards brought to the table - nice not to have to rummage around for glasses to read the small print on a paper menu. Nice too, incidentally, to be able to park in front or nearby - at least if you arrive early. The sparky, self-possessed management of the co owner matches her husband's cooking -there's no disdainful, minimal or obsequious service here - another advantage of a family-run establishment. (78, Tsar Simeon St; phone: 983 1417 or 0887 523376).

As you would probably expect, we escaped regularly from our noisy abode in Varna and sampled the restaurants in and on the way into the centre. The best by far was Paraklisa, not just for the food, but for the whole atmosphere. Established at a time when the majority of places were rushing to serve the ubiquitous dishes you can eat from here to Sydney and beyond, the owner of the Paraklisa moved in the opposite direction. You need to allow plenty of time for a leisurely read through a menu the size of a novella because it's packed with traditional dishes from all over Bulgaria. Choosing is a problem, which is why you need to go back again. And again. Beware the salads: delicious but huge. Happily, you can specify a half-portion, or a quarter portion, as indeed you can also with the main dishes. Periodically through the evening two comfortably sized ladies with rich "lost voices" sing folk songs, and at the end you can add your message to the distempered walls, though you might like to take a small can of paint to cover up the contact details of tasteless estate agents seeking free advertising. (Ezarkh Yosef St; phone: (052) 639 735).

Back to Sofia, Dr Faust, at 6a Budapest St (phone: 987 4120) is conveniently situated for a meal before or after a concert at Bulgaria Hall. The salads are imaginative, visually appealing and with great flavour. However much one might like the endemic Shopska, and I really do, I relish something a bit different from time to time. The main courses are equally good, and the service, slightly whacky but pleasing. 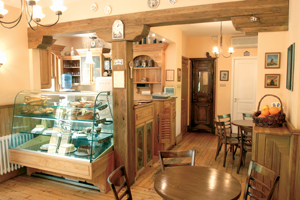 The last place I'd like to mention is the bijoux little, NON-SMOKING, cafe, Villa Rosiche. The ceramic plate on the wall at 26 Neofit Rilski St gives a hint at what might be beyond: good coffee, superb croissants and tempting gateaux served at four tables in an attractively "remonted" house. Apart from when it's really cold, you can also sit outside, along with your smoking friends.

Heralding from the UK Ann has led an expatriate life "for more years than I care to admit", the last 13 of which have been spent, very happily, in Eastern and Central Europe. She came to Bulgaria in 2002 with her husband, Ian Stewart, who is Country Director of the British Council. This is the first posting where Ann has not worked and this has given her the time to become involved in the IWC. When she is not campaigning for Breast Health Awareness with the IWC, Ann enjoys travel, current affairs, yoga, walking, music and dance performances and reading as well as more domestic occupations like cooking.

Read 5970 times Last modified on Tuesday, 15 March 2016 14:40
Published in Vagabond Features
More in this category: « MY OWN CHOICE: A REGULAR DINER HIGHLIGHTS SOFIA'S BEST WATERING HOLES AND RESTAURANTS MY OWN CHOICE: RECIPE FOR BULGARIAN ENTERTAINING »