MY OWN CHOICE: MY EPICURIAN ADVENTURE

Your personal guidebook for a cultural, culinary tour of the country

Every nation's folklore probably has a special section of proverbs relating to eating and drinking. The Bulgarians are no exception, though the essence of our wisdom throughout the centuries has given expression more to our problems than to our everyday pleasures. Anyway, let me try to take you on a culinary tour of this country with the help of some lesser known sayings from a "people's guidebook".

"When he goes out, the dogs will follow him to lick him"

I can't but begin with one of my favourite restaurants in Sofia: Mahaloto, or the Pendulum, (51 Vasil Levski Blvd; phone: 0887 617972). Situated in a basement on a corner (but what a corner, between Graf Ignatiev St and Vasil Levski Blvd!), Mahaloto is my choice both in summer and in winter. When it gets cold, all I have to do is saunter down a few steps and the noise of traffic disappears as I enter the cosy atmosphere of the three red brick and grey stone rooms. To this is added the almost compulsory eclecticism of old clocks, books, irons and radios, plus popular music playing discreetly in the background. When it's warm, I rush to the garden, with its white walls, colourful sunshades and tall trees, which sometimes drop their flowers or leaves onto the tables below. And the cats, the tabby cats which take on the role of the dogs in the saying.

You quickly learn the menu by heart. It is not difficult: four pages, the same for years. Well, the wonderful, young looking staff are always ready to improvise, even though the menu caters for every taste. Trout with honey and walnuts, hot rissoles with mozzarella, ultra-thin schnitzel, knuckles, and that salad with fresh onions and tomatoes that can tempt even a teetotaller to order a third rakiya. Beer is on tap and there is a selection of good wines. The patrons? They are the other piece of magic at Mahaloto. You will certainly see a familiar face - from the bohemians of Sofia's intelligentsia to enthralled expats. This is why advance booking is recommended.

"An untouched dish - it's no good"

When I go to the seaside using the northern road, I make almost compulsory stopovers at three very Bulgarian places. The first is the village of Oreshak near Troyan. Close to the famous Troyan Monastery is situated Stranopriemnitsata, or the Inn, (phone: 06 952 2109, or 0887 927035; www. balkania.org). There you are in for a long "battle" with the menu, as it reflects all the culinary traditions of this beautiful area. The best thing is that you can't make a wrong choice. You will always be pleased with what you've ordered: all sorts of hotchpotches cooked in earthenware dishes, peppers stuffed with beans, several varieties of kavarma and, naturally, the tripe that causes so much controversy in the EU. After a compulsory visit to the museum and shopping at the permanent national crafts exhibition (Troyan ceramics are the most beautiful in the world!), the fresh mountain air lures you again to Stranopriemnitsata. It is time for a haydushki shish or brigand's shish kebab!

Some 60 miles drive to the east finds me gazing at the fairytale architecture of the village of Arbanasi near Veliko Tarnovo. Tired of strolling along cobbled streets and visiting medieval churches, I always go to sit down in Payaka (phone: 062 34257, or 0888 206113). In fact, the Spiders, as the Bulgarian name means, are two separate restaurants one on either side of the road, but the more luxurious one also has a welcoming hotel built in the old Bulgarian style. All meals are served on unique Tarnovo crockery and connoisseurs will certainly opt for the wide range of pork and lamb dishes. However good the local Bolyarka beer may be, my advice is that you choose a red wine. Whether from a bottle or a barrel, it always makes you sing in the end. 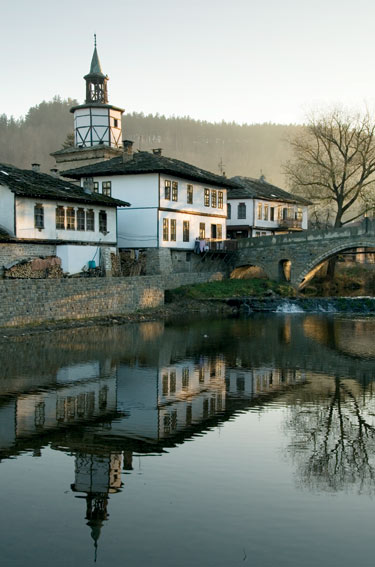 From the old Bulgarian capital I turn south, to the Gabrovo area of the Balkan mountains, where magnifi cent Tryavna nestles. In the very centre of town, close to the stone bridge and the clock tower is the Zograf Inn and Tavern (1 P. R. Slaveykov St; phone: 0677 4970; www.tryavna.bg/zograf/). The decor is that of the Revival period. It is better in the summer because the tavern overlooks the river and its constant babble whets the appetite. The menu here is again a lengthy read which features rarer dishes from the local cuisine. Still, I would recommend sarmi and musaka as well as the chef's specialities. Both the Slaveykov brothers loved this place and, as their humble follower, I always have an insatiable appetite here.

"A full belly does not trust an empty one"

I am now on the northern coast. A few miles from Kavarna on the road between the village of Bulgarevo and Cape Kaliakra I turn right and, after a few sharp bends, stop on the rocky shore. For two years now this site has been the home of Midenata Ferma, or the Mussel Farm, (phone: 048 911 377), probably the only restaurant of its kind on the Black Sea coast. Supplied entirely from the recently developed beds for growing our native black mussel, it offers everything prepared from this delicacy. Boiled and grilled mussels, mussel salad, mussel soup, mussels with rice, mussels with lovage (called lyushtyan in Dobruja) and even desserts - mussel cakes and mussel pies. The only "difficulty" I have is the choice of drink: whether this should be Bulgarian mastika or its Greek counterpart, ouzo. For the more discerning there is also a wide choice of Black Sea fish. I heard recently that another mussel restaurant has opened in the vicinity, so let's go and see for ourselves. In any case, however, advance booking is compulsory, as is careful parking.

"A cat will smell fish three houses away"

I mustn't fail to pay my respects to the southern Black Sea coast too. Where? Sozopol, of course. Every Sofianite has a favourite spot in this lovely town and so do I. This is the fish restaurant 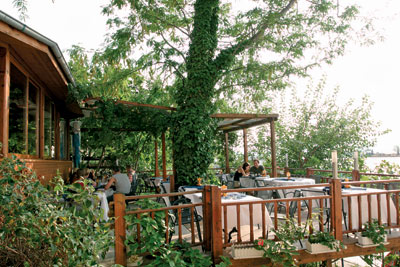 Kirik (77 Ribarska St; phone: 055022860, www.kirik-sz.com). It is named after the nearby island and is situated opposite the marine base. Years ago, the base was secret and anybody walking in the neighbourhood with a camera could get into trouble. Now that Bulgaria is a NATO member there is no such risk and we can indulge in its culinary delights at our leisure. In Kirik, there are plenty of these. Here, each course in the ritual that makes a meal is tempting. The starters: marinated chernokop (young bluefish), roasted chiroz (dried fish) with lemon and fennel, tsaganaki mussels, smoked bonito. The main course is naturally fish from the Black Sea. Everything that the sea has to offer is available here: the "royal" blue fish, grey mullet, scad, shark, herring, bass, garfish or gobies. Each fish dish is offered with skurdalya, a secret recipe of the establishment, which is simply delicious. The highlight of the desserts is the figs, which, in autumn, if not in the form of jam in the famous pancakes, can be picked straight from the trees encircling the terrace. It is also a favourite spot for Sozopol's cats, who know a thing about fresh fish and patiently wait for their share.

On my way back from the seaside I stop over in the region of Haskovo. Twelve miles from the district's centre lies the famous resort of Mineralni Bani, or the Spa. It is justly called the Bulgarian Karlovy Vary: the 57 degree Celsius mineral water has amazing healing properties. From the number of sanatoriums and hotels I choose the Bulgaria (2 Prostor St, phone: 03722 2404 or 2405; www.hotelbulgaria.com). Modern, with a splendid courtyard and an outdoor swimming pool, it also has an intimate restaurant and a tavern, which offer truly delicious dishes typical of southeastern Bulgaria. I think this is the best place for mishmash and peppers in tomato sauce, which, coupled with the splendid wines from Sakar, Lyubimets and Stambolovo, are a real culinary treat. Desserts are not to be neglected either. Because of the mixed ethnicity of the area, they bear Oriental names: baklava, kadaif, tolumbi and malebi.

Westward ho! The last stop before the capital is Bansko. Strange as it may seem, I like going to this popular ski resort in the summer. The reason is in the courtyards of my two favourite taverns, Dedo Pene (1 Buynov St; phone: 07443 8348, 0888 795970; www.dedopene.com) and Baryakovata Kushta (3 Belyan Ognev St; phone: 07443 4482, or 0899 670734; www.baryakova.bansko.org). Irrespective of which of the two I am in, the scene is always the same. The local all male bands take their place under the vines while I am still having my salad and begin playing everybody's favourite Macedonian music. Everyone at the tables sings to the music and in the intervals you can hear the sound of sheep bells. A beautiful sound. Then come the inevitable banski starets and banski babek, dried sausages, and, to go with the wine, the famous kapama and chumlek - Bansko's trademark dishes. How could I possibly leave before first cock-crow? And if the barbecue in Baryakovata Kushta is a touch better, Dedo Pene has its own advantage: the colourful character who owns the place. He lives in the United States for three months a year and spends the other nine in the pub. A silver tongued man who is a living history of the Pirin area. 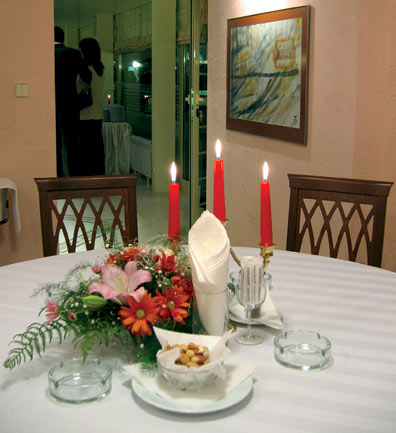 Finally, back in Sofia, in the city centre again. For over a quarter of a century there has been a restaurant in the building of the Ivan Vazov National Theatre. Its latest name, after its most recent renovation, is the Antique (phone: 0888 885516, or 987 9768). Years ago it was a typical theatre bar, with low prices and the usual theatre goers, and was full after every performance. Today it is a bit different, with a luxurious, exquisite interior, and European food at European prices. Unfortunately, you will rarely spot your favourite actors and actresses, but their spirit is all around you. Especially with the recent publication of Nikola Antikadzhiev's autobiography, renowned theatre critic and present owner of the restaurant, which is alive with memories of the great masters of the Bulgarian stage.

Read 6901 times Last modified on Tuesday, 15 March 2016 14:41
Published in Vagabond Features
More in this category: « MY OWN CHOICE: WINING AND DINING IN AND OUT OF STYLE MY OWN CHOICE: EATERIES THAT STAND THE TEST OF TIME DESERVE FAITHFULNESS »